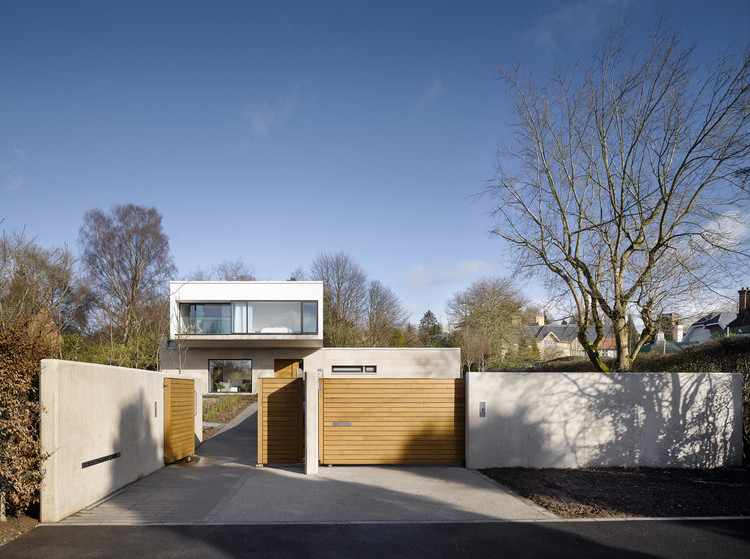 Text description provided by the architects. The house is sited on a tree lined suburban road in Cheshire and was designed for a young family couple. On the road, the house types are suburban; conservative, bland and mock traditional. Our approach was to create a fresh contemporary version of the suburban house type; one that reacts to its context and is tailored to suit the specific needs of the client.

The client asked us to design a four bedroom contemporary house to house their family. They also asked for a three car garage, and an independent granny flat (this later became adapted to become the children’s playroom.) Of prime concern to the client was the privacy of the living areas and the garden. They were also keen that the internal spaces felt bright and open with rooms flowing into one another; They did not want everything to be visible upon first entering the house, rather that it allowed one to meander through it; discovering places and views as one does so. During the whole design and construction process, the clients were very open to suggestions and permitted us a great deal of design freedom.

When commencing the design, we first looked at how the garden could relate to the internal spaces. To the front of the house, there was a large south facing garden, which in the neighbouring properties was poorly utilised due to its visual exposure to the public road. Our starting point therefore was to create extra screening along the site boundary to allow this area to become a useable private family outdoor space. As the outdoor garden space was now private, we were then able to put the living areas on the ground floor, allowing for direct access from inside to out. The privacy of the gardens also allowed us to create large window openings, providing views into the garden without the need for screening, during the day or night. We designed the house in such a way that rooms did flow into one another, with each room having its own individual relationship with the outside, creating a dramatic spatial sequence.

The actual form of the building is expressed as the meeting of two volumes; the main volume contains the house, whilst the lower stone volume’s wing contains the granny flat and garage. The solid stone block sits aligned with its neighbours whilst the higher rendered block cantilevers over it on the south elevation, creating a dramatic entrance. In a way, the whole design is about the drama of entrance; even as you move through the house the visitor is continuously entering; discovering the drama of each space sequentially.

We did have a lot of opposition from the planning department and had to really struggle to get the building approved. The planning officer put the project to committee as she said that she did not understand modern architecture! We had also originally designed a canopied entrance gateway, but the planners asked us to remove this. We later submitted a separate application for this item as we felt so strongly about its importance to the design, but it was rejected at appeal.

As we had to work within a tight budget, we spent a lot of time searching for good quality materials at low prices; bartering with companies to get better prices. One of the joys of working on this project was investigating the qualities of the different materials and assembling with the client an acceptable materials palette. Externally, we used a white silicone render and sandblasted Jura limestone (which we had discovered on another project. This stone could be supplied at low cost and by sandblasting it, gave it the appearance of Portland stone.) For the internal floor surfaces we primarily used the same Jura limestone on the ground floor (but from a different seam and in a different finish.) On the first floor, we used chemically treated light brown oak timber flooring. Within the ensuites, we used flamed black granite stone tiles, which we were able to purchase at an extremely low cost as it was meant to be used for street paving.

The building’s structure was made up of concrete floor slabs on blockwork. The structure was initially designed and detailed as a steel frame, but it was discovered very late on that a very large saving could be made by simplifying the construction method. Again for budget reasons, we used a metal deck roof. One of the joys of working on this project was working with craftsmen, like the stone masons and the carpenters who really understood their materials and were able to pass on their knowledge and contribute to the building’s construction.

The contractor turned out to be very good. Although they had never constructed a modern building before, they worked with a high level of enthusiasm, understanding and pride. But because of their novelty, they were unable to keep the programme under control and it extended significantly beyond their expected completion date.