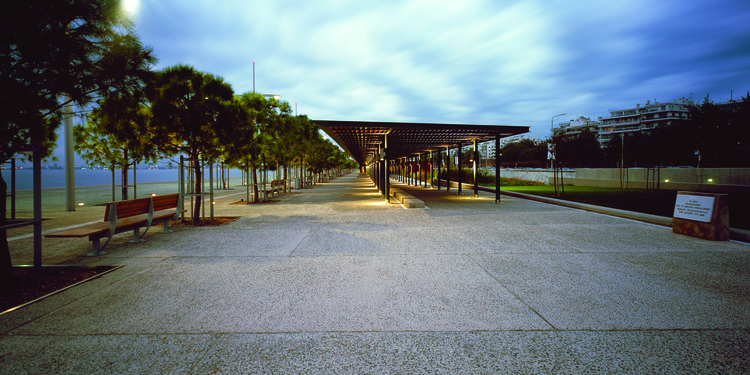 Text description provided by the architects. As more and more people are accumulated in big cities, the constantly expanding urban environment, becomes as valuable as the threatened natural environment of the planet and demands the same balanced management. The cities worldwide seek for viable strategies of recreation; seek for balance between the natural and the built, exploiting their natural advantages (sea waterfronts, lakes or rivers, forests around cities and landscapes of natural beauty). The design of the public space of cities, the urban parks and the big voids of the urban fabric, become ideal landscapes for the pursuit of balanced solutions that respect equally the citizen and the environment.

The intention of the Municipality of Thessaloniki for the redevelopment of the New Coast and the announcement of the relevant competition, gave us the opportunity to experiment on this organizational logic of the city’s public space. Where the architectural design, encounters the options of the formation of an overall micro-ecosystem, with the interactions, the variation, the heterogeny but also its coherence. The design, the choice of materials, the choice of plantation, the lighting, they all have to contribute not only to the construction of a high quality public space but mainly to the organization of a space that is “inscribed” smoothly to the existing urban landscape and its management and maintenance do not demand the waste of valuable resources. Recognizing the multiple factors that are inherent to the attempt of redesigning an urban space with multiple meaning for the city, we made an effort to study the area globally. Our basic purpose was the complete approach of the topic, aiming at proposed operations that present continuity and coherence to a unified architectural proposal, and at the same time contribute to the regeneration of the ecosystem at the borderline between sea and city.

The New Coast of Thessaloniki is a linear place with relatively limited depth and big length, a fact that offers to it the characteristics of the “front”, of the thin skin, that is inserted on the difficult and challenging limit between land and sea, between natural and constructed landscape. The design of this limit has to co-exist and converse with the water element, the most unstable natural form. Specifically the sea background of the gulf of Thessaloniki, constitutes this amazing scenery, where the ephemeral and the mutable elements, create a different atmosphere each time. Any intervention to this background, takes its color, exists because this exists, cannot compete with it but only co-exist and earn a little bit of its tireless glamour.

For these reasons, the basic decision of the proposal was to maintain the characteristic and recognizable physiognomy of the unified front towards the sea, the continuation and the linearity of the landscape. Believing that we have to preserve the most charming element of the New Coast of Thessaloniki, that is the unified and interesting promenade path next to the open sea horizon, there was no attempt of an extension of structures inside the sea. The “reading” of the site, the procedure of pointing out its characteristic elements and parameters that influence its identity, provide the interpretative key to understand it and design feasible proposals. For the waterfront of the New Coast, we distinguished two major characteristics, which set the principles for the basic choices of the proposal.

The walk right above the limit between land and sea, the pavement of the Coast, the open and not interrupted range of vision, the feeling of the infinity due to the intense presence of water, the line of the horizon inside the sea, that sometimes is profound and clear and other times is completely lost merging sky and sea with impressive results. The green spaces, with interspersed uses of recreation and sports, differentiate this section from the breakwater, offering shadow, soft grounds, visual isolation, interchanges of spaces. The linearity, the dynamic continuous, the open horizon, are the important advantages of the New Coast, that are stretched and strengthened with the formation of the breakwater floor.

The breakwater of the coast is an ideal place for walking, without interruptions, without distractions. The “walker” is exposed to the light, to the open perspective, and has a continuous walk on the charming limit between two opposites: the stability of the massive breakwater – the instability and lucidity of the liquid element. The paving of the coast, from the White Tower to the Concert Hall, is handled unitedly and equally, without hierarchies and alterations to its width. We propose a cast floor that will be constructed along the waterfront length and all its width, wherever now exists hard floor. The floor is differentiated only in two occassions: a. along the cycling lane, b. at the ending of the breakwater towards the sea, where we attempt to point out the land and sea limit, using a wooden deck of bangkirai.

In the inner side of the breakwater, the alternative of a shaded walk is offered. This walk with the proposed sitting-rooms among the trees, is particularly useful during the summer months mainly to elderly people. The alley functions as an intermediate limit-filter between the two discrete parts of the coast front: the paving and the green zone. It creates a quality differentiated walk, it is delimited from the trees and shapes a unified image to the view of the waterfront from the sea. At the opposite side of the linear route, 15 green spaces are formed at the inner side of the coast, as a succession of “green rooms – gardens”, each with a special thematic characteristic. The choice of this term, rooms – gardens, describes the intentions: it is about a sequence of spaces that attempt to maintain the familiar atmosphere of the private, while forming the public space. It’s not about big “parks”, but “rooms” of small size that remind of the house gardens that existed in the area and reached the natural seashore, before the landfill of the coast. The gardens, in opposition to the paving of the coastline, are protected spaces, have their own introversion. The differentiation, the interchange, the possibility of visual isolation, the shading, the surprise, the discovery or the reveal of the different, the game, the soft floors, the green: the gardens follow different ways of synthetic language, glorifying the familiar and the private, creating new collective spaces in a local scale.

The experience is transformed into a path, where the ephemeral (the interchange of seasons) and the various (the multi-centrality of the project) are appointed to dominant elements of composition and distract different feelings from the visitor – user. The myth is revealed along the path, re-determined through the natural phenomena, and creates constantly transforming visual phenomena. This tendency of the contemporary city landscape composition, aims at the creation of a space in motion that follows the change of seasons. The names of the fifteen “green rooms” follow their thematic organization as each space is signaled notionally. The names of the gardens starting from the Garden of Alexander are successively:

From these gardens, the last five have been constructed. These five gardens are located at the east side of the coast, near the Concert Hall. The construction of the first eight gardens is currently in progress. The area of the Garden inside the Sea and the Garden of Friends belongs to the Hellenic Public Real Estate Corporation. The subject of their construction is not currently evolving. 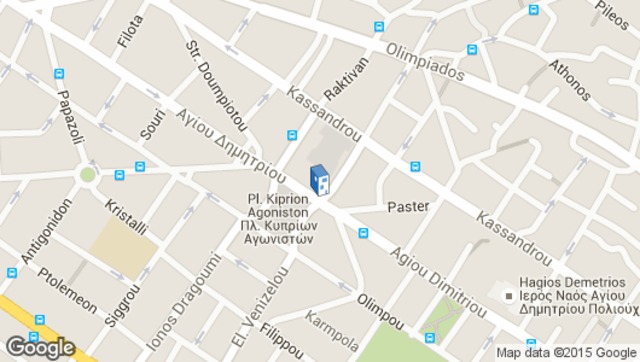 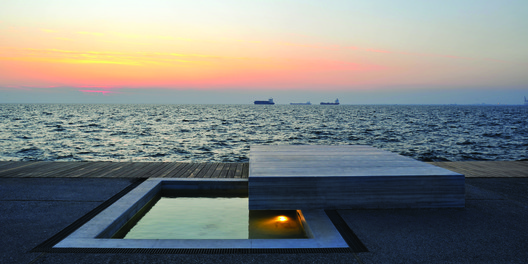