Text description provided by the architects. Facing Pontevedra, on the other side of the river Lerez, an untidy urban setting has developed with a mixture of houses and amenities. It is an environment that demands clear actions that will regenerate the urban surroundings. The renovation of the old Pasaron stadium tried to liberate space on its perimeter in order to create new urban squares and green areas for the enjoyment of neighbours and to allow for an easier access to the stadium.

The pitch is at the heart of the proposal. Its geometry defines that of the whole set, which can shelter the estimated 11,000 spectators. The impossibility of playing the matches at another location meant that the renovation works had to coincide with the normal use of the stadium. The intervention was carried out in phases, successively demolishing and rebuilding the stands, the canopies and the existing uses on each of the sides. The new grounds have two superimposed perimeter stands, concentrating all amenities in a perimeter hallway which can be accessed from both the inside and the outside of the stadium.

The first stand towards the exterior is turned into a kind of plinth, which is open to the city and configures a perimeter annulus that allows for a clear access route to all other stands. A second stand seems to float over the previous one. The exterior space continues towards the inside forming a street with two levels. The planned amenities are located on the perimeter, open towards the exterior and the pitch. Their existence allows for an uninterrupted use of the building and the immediate urban environment. They form a vitreous ring that adapts the scale of the building to its surroundings.

Following an economy of means, the structure of the stadium is formed by concrete frames that rest upon a great wall-beam that defines the building’s envelope and configures a categorical image with random perforations and great projections that cover the exterior areas and shelter the entrances. The translucent roof allows for a uniform and faint inside illumination. 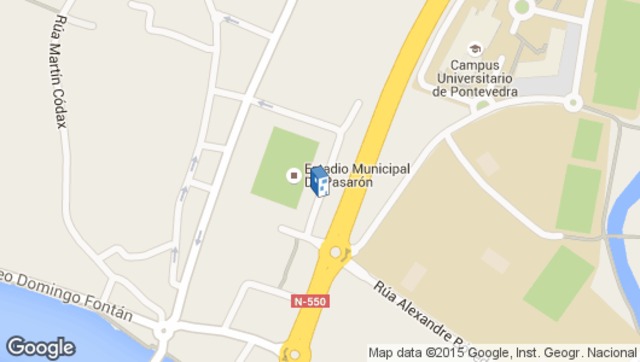