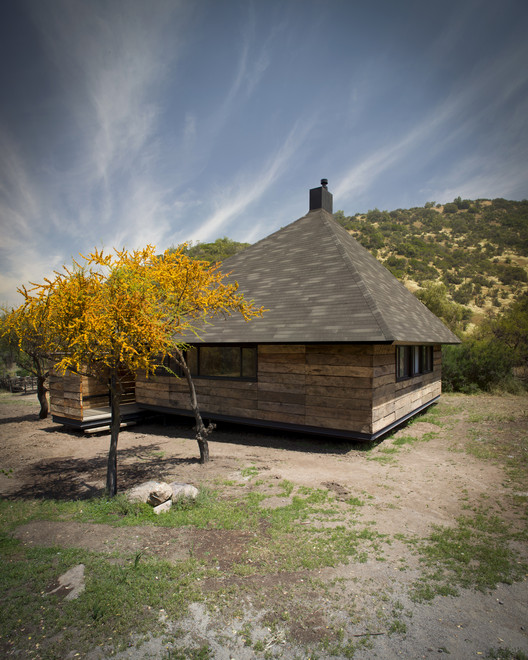 Text description provided by the architects. The assignment was to build a small house for the keeper of a farm which corresponds to an ecological reserve in the urban limit of the city of Santiago. This place, despite being private property, was to have free access to practice mountain biking.

The rural condition of the place, the weather and the idea of creating a point of access and control to the place, led the architectural typology of the house. This worked on two concepts: dark vertical roof and natural colored wood walls. These conditions, in addition to the black colored windows, allow the house to be a neutral building in the natural environment. The red access door contrasts with the rest of the house.

The location of the house was chosen to meet project requirements and to optimize the sunlight.

The roof protects from water and snow in winter and high summer insolation. This was supported by the use of eaves, to which were incorporated vents. These vents work together with the upper chimney to generate a flow of air in between the ceiling, helping to prevent overheating in the warmer months. For the colder months, we worked with thermal insulation in the drop ceiling, allowing the temperature to keep warm inside.

The oak wood cladding of the exterior walls is 70 millimeters thick. The faces of the wooden parts were placed without brushing and were ordered regularly. This result is external walls of high thermal resistance with a regularly ordered composition and great texture.

The construction of the house was done mostly with metallic structures and wooden plates which allowed a quick installation. The house is supported on metallic stilts allowing it to be less invasive with the ground surface.

Thermal insulation is incorporated inside the walls, in ceilings and floor slab.