Andjela Karabasevic's 'One Home For All the Homeless' proposal for this year's D3 Housing Tomorrow 2013 competition won the Special mention - Dystopian vision which envisions one megastructure that will house all the homeless people on our planet. It spreads continuously through the cities, fields and waters, only facilitating bare living necessities, and significantly increasing life quality in general, and therefore the overall rate of productivity. Through this design, power, wealth and progress of one nation is promoted by resolving one of the major problems it has caused to the society. More images and architects' description after the break.

Over 2.6 billion people around the world do not have access to adequate sanitation, while around 100 million have no housing whatsoever. These are all just assumptions, while the real numbers are much worse, and impossible to track. An unimaginable percentage of our society struggles to survive and doesn’t even have a remote possibility to experience more of their life, and yet we remain indifferent, presumably secured and untouchable.

The proposal aims to give part of the sky to the poor. By diminishing its own flaws, the city becomes even stronger. Instead of trying to reach the highest point on the sky, the cities will compete in areas of their sky they are willing to give up in order to improve their society. This wall would become a new indicator of a city’s power. Every city gets a certain length of the wall. The longer the wall, the greater the city.

The structure occupies minimum amount of the expensive land, but a significant percentage of our sky. It is a wall of infrastructure, a vertical field of voids, offering numerous places to sleep, maintain hygiene, cook and store food, store belongings, and to get one’s own permanent location on the world map. Plus endless empty space around it, the priceless sky, which paradoxically turns it into one of the most luxurious living spaces in the world.

It is dimensioned and occupied according to its genetic code. Once the occupant has become independent to join the Society, he leaves.  When there are no more occupants left, it is either  to be torn down, reconnecting the humankind to the sky, or  to remain indefinitely, and with its monumentality  pose as a daily reminder to the ignorant society of the problem it  actually resolves.

With no beginning nor the end, people all around the world are gathered into one single structure. Unlike Superstudio’s Continuous Monument of 1969, which it was inspired with, it is not  about globalization and loss of identity, it is about nourishing millions of identities that have yet to develop. 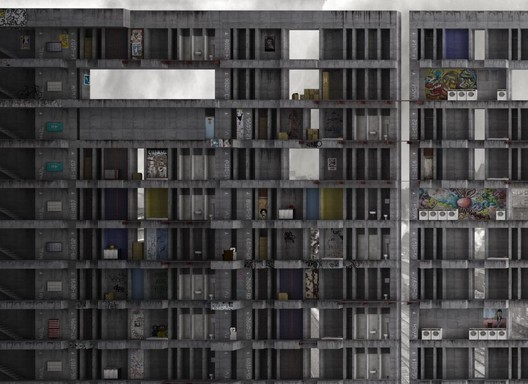