MAD Arkitekter, in collaboration with developer Entra, have developed a project for the relocation of the University of Oslo’s Faculty of Law. The project site and the historical university buildings are on opposite sides of the urban square, Tullinløkka, and a historical building on the site will also be preserved. The new university buildings for UIO are given a compact form, with frontage towards Tullinløkka as well as an iconic expression which takes a position in the cityscape. More images and architects’ description after the break.

Oslo is a relatively small city. From the historical student plaza, “Stundenterlunden," one can view, in a glance, all the institutions which are historically of national importance. The project site is in a city block which we have called "Tullinkvartalet," because of its direct proximity to the cultural common, Tullinløkka. Tullinkvartalet is situated in the western city center and in one of Oslo’s most central urban areas.

The site is bordered by streets and axes of local and national importance and is at an important local transport node. Close by, we find some of Oslo’s most important conserved, historical buildings in addition to institutions of national and municipal significance, such as the Royal Castle, the National Theatre, the parliamentary and government buildings, law courts and town hall. Our aim was to revitalize and strengthen the presence of the University of Oslo in this crucial location in the city.

The Faculty of Law has grown since the foundation of the University of Oslo in 1811 and the city center has programmatic requirements that lie beyond historical representation. A new era calls for new buildings to meet today’s needs. It is our belief that essential city functions should be in the center of the city, where the people are, rather than in in the outskirts, on green field sites, where transport by car becomes the norm.

Apart from a historical building which will be preserved, the existing buildings on the site are all to be replaced by modern educational facilities for the Faculty of Law. The chief façade, towards Tullinløkka, will have a unique architectural expression, fitting for a building with an important role in society.

On street level, passages lead into and through the block, with the possibility for a number of retail and tertiary facilities which would serve students and staff as well as the public. The main entrance leads one into the educational forum, where the city floor extends inside the building and connects to the vertical atrium space. The auditorium and related facilities are located on the lower floors, to foster flexible use in the evening and weekend. Here, it will be possible to hold professional seminars, conferences and other public-focused events.

The library and literature research center are located at the core of the building. There are vertical openings between these areas and the position is visible on the facade as a stepping of the volume. There is direct access to roof terraces from the student restaurant, library and common areas, which allows the users to experience the central and historical context to which this institution contributes. On the seventh floor, adjacent to the publicly open student restaurant, the largest roof terrace is located. Here, in an area with ample sunlight, one is afforded views over central areas of the city, from the royal castle to the town hall.

The student study areas and staff offices are located along the facades, with the reading rooms primarily oriented towards Tullinløkka. The lecture halls are recessed in the building’s volume. An informal study area is created around the central atrium.

The design of the facades constitutes a simple geometrical constellation. It mirrors the main form of the building, as well as the relationship between the vertical wall surfaces and the setbacks and steps in the facade. The solid wall modules are alternately clad in stone and aluminum. The proportion of solid wall to glass varies according to orientation in order to optimize energy consumption. 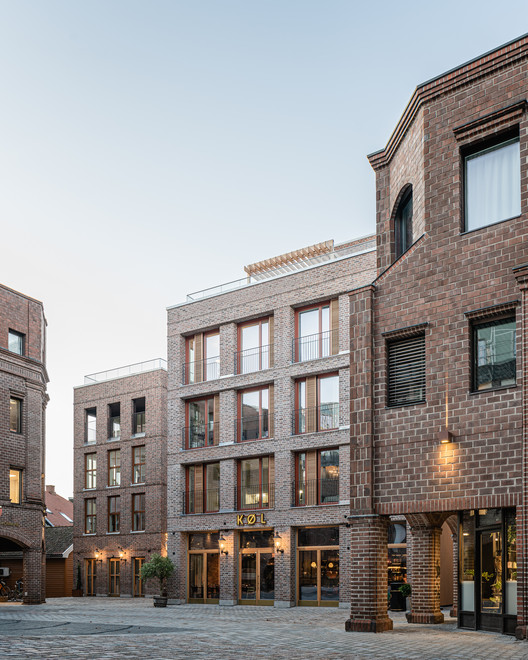