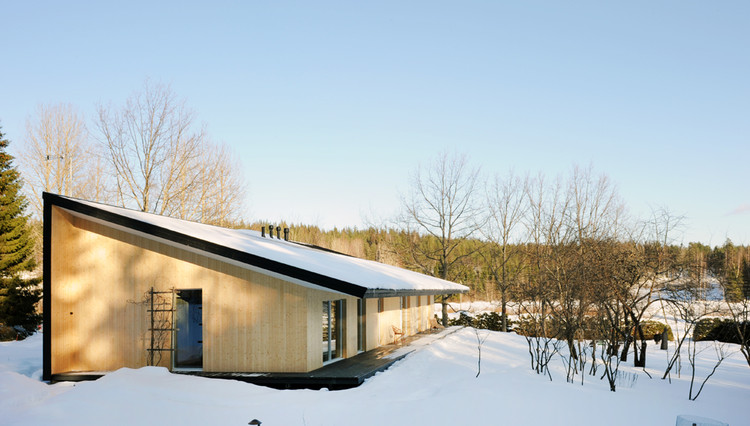 Atelier Heikkilä is a wooden residence and atelier for a designer couple in Central Finland. The beautiful site overlooks lake Päijänne: it slopes down from the road towards the lake, and the lower parts of the site are filled with a garden.

The atelier has been designed for interior architect, professor Simo Heikkilä and his art historian wife. The starting point in the design was to build a storage space for their works, that would also be a good place to dwell in. The building is like a piece of furniture – a functional and minimalistic three-dimensional object.  Wood was a natural choice for the building material; after all, a large part of the designer’s production is from wood.

The atelier is approached from the dark rear side, where visitors are greeted by a large oak tree. The new building is located on the footprint of a former house, and as such preserves the use and spirit of the old milieu.  The light-coloured front side of the house is directed towards the sun and the view over Lake Päijänne. The spaces open up towards the lake, while the backside by the road is more closed.

The starting point of the project was to create considerable storage space for furniture prototypes that the designer had accumulated over the years.  For this purpose, the couple neede a half-open a gallery space inside the home.  The solution was to build a mezzanine gallery on top of the living spaces.

All the living and working spaces are located on a single level.  A few closed  rooms are located on the entrance side under the gallery, while the lakeside space is completely open. The owners wanted to leave the interior as open as possible, so that the living arrangements can find their own form. Later, it will be possible to set up the necessary partitions. The atelier is heated by geothermal energy, and in regard to its insulation properties, it is close to a low-energy house. 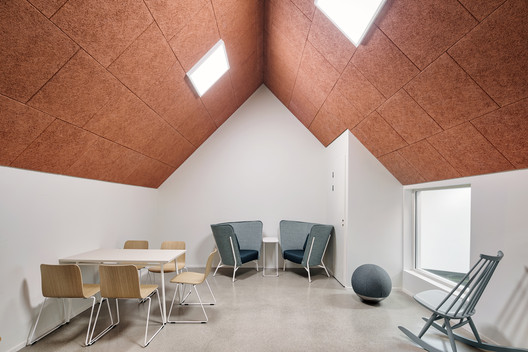