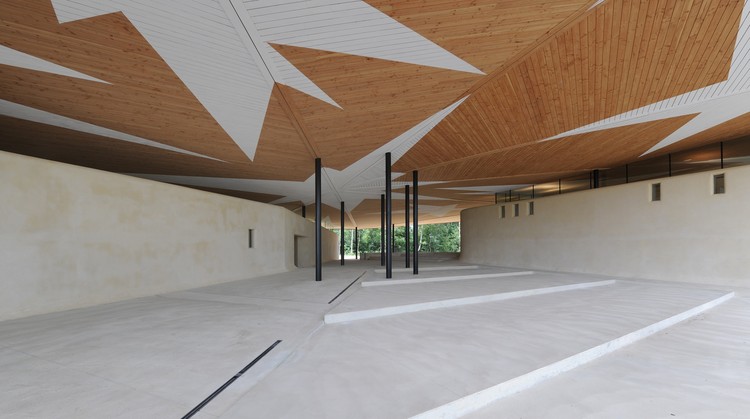 Text description provided by the architects. Dethier Architectures was awarded this project after a European-wide invited competition. We developed a very specific concept for a funeral home and landscaped cemetery, built on a former clay extraction site. The landscape guided the architectural composition of the funeral centre. In the words of Daniel Dethier, « We designed an ensemble where individuals can come together, a place where feelings are nurtured by the relationship between the landscape, nature and the built volumes, which appear to emerge from the ground and organically find their place.

The Welkenraedt funeral centre consits of two main structures that interconnect beneath a broad planted roof. The smaller of the two contains a cafeteria and associated dining areas, while the larger structure houses chapels on the ground floor, with offices located on the upper floor, and technical areas and cremation facilities in the basement. At the entrance to the site, set off to one side, a caretaker’s residence blends with both the contours of the site and the formal aspects of the main building. Particular attention has been paid to the harmony of the volumes and their interconnections. The result – a feeling of balance and reassurance – is reinforced by the finishing of the concrete walls. Curves are preferred means of expression, including in doorframes and the bases of walls. The tranquillity this affords is not antithetical to the communicative strengh of the tower that emerges from the central building. The tower is used to conceal the chimneys of the cremation facilities, while providing natural ventilation to the chapels and bringing light down into the building’s core.

In the public areas, we find the same skilful blending of technical aspects and detailed finishings, whether in flooring, wrought iron or joinery work. Moreover, the entire structure has been fitted with a sophisticated system for providing natural ventilation to both buildings. The layout emphasises the flexibility of the interior spaces. In the reception area, the passageway design and the moveable partitions mean that reception rooms can be isolated one from another or joined together. The placement of the chapels offers a similar level of flexibility, in this case by the introduction of rotating partitions between the three spaces, which may be combined. The main chapel opens onto the outside, while the intermediate and smaller areas are more private and are bathed in light coming from above. The acoustics were specifically designed to give the chapels a more solemn feeling through an extended reverberation time, while offering greater intimacy in the more absorbent reception zones. The cremation facilities, which are also accessible to the public, were given a very specific design.

One of the cornerstones of the project is the integration of the site into the natural environment. This includes the design of the structure, which incorporates vast floor-to-ceiling windows that give onto the outside. The concept of transition is a key architectural element, which is underscored by the impression that the buildings are rising from the earth. It can also be seen in the design of the roof, which « unfurls » in harmony with the topography and continues out over the footprint of the buildings, provinding shelter for open-air zones in continuity with the environment. Views of the landscape thus extend throughout the buildings, which organise, reveal and bring together the various peripheral spaces. The natural site where the funeral centre is located consits of more than six hectares of land, three of which were built. The site was developed very carefully, working in close collaboration with landscape architect Erik Dhont. Upon entering the centre, circulation is organised in a functional, sensitive manner – access roads lined with banks of indigenous species lead visitors to parking areas. In addition, the entire landscape design was conceived to bring together the site’s various functions (cemetery, scattering lawns, rest areas, crematorium and the original natural site with its specific biotope) into a carefully-composed whole where each area appears to have been placed there in a simple, natural and « serene » manner. The various types of burial places have also been thoughtfully designed, along with the furnishings and signage. In keeping with his approach of artistic integration, which he has advocated since the very beginning of his career, Daniel Dethier asked Nicolas Kozakis to join his team in the design process. His participation resulted in design elements that appear on the centre’s ceiling and on the walls of the cremation ovens.

Artistic intervention in a funeral centre is a particular type of challenge, especially when considering the sorrowful aspect of the site, its symbolic richness and the wide range of multicultural traditions. Futhermore, there is the danger of developing something « conventional », of holding back for fear of distributing the visitor. By painting thirty-one glowing stars on the complex’s ceiling, Nicolas Kozakis succeeded in overcoming these concerns and created a rich, poetic and contemporary vision. Kozakis explains: "It was Daniel Dethier who invited me to work on this project. I first considered a design that involved a cut diamond structure. Later, the project shifted towards the concept of a constellation. Through their monumental size, momentum and proximity, the stars, which are all different, draw the viewer into a close rapport. This is the opposite of decoration. For me, it is an image of a sky that, beyond any denominational considerations, represents a passageway. I also placed stars on the sides of the cremation ovens, to fit in with the design imagined by Daniel Dethier. " The quality of the relationship with the architecture should be underscored. He succeeded in integrating his work into the concepts developed by the project's designers. He worked with their desire to design a ceiling with reflecting surfaces that would provide indirect lighting without any light sources being visible. Using the iridescent material that the architects recommended, Kozakis was able to utilise light technology calculations that defined the ideal location for the paintings. The composition appears to float above the place; taking advantage of the transparency of the upper sections of the walls, Kozakis allows the stars to drift from the interior to the exterior in an infinite chain that leads the viewer's eye from one painting to the next. 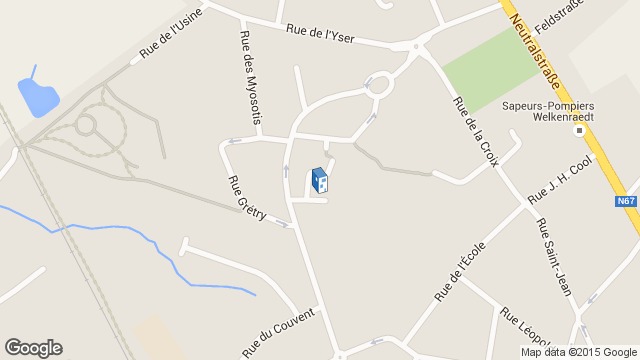