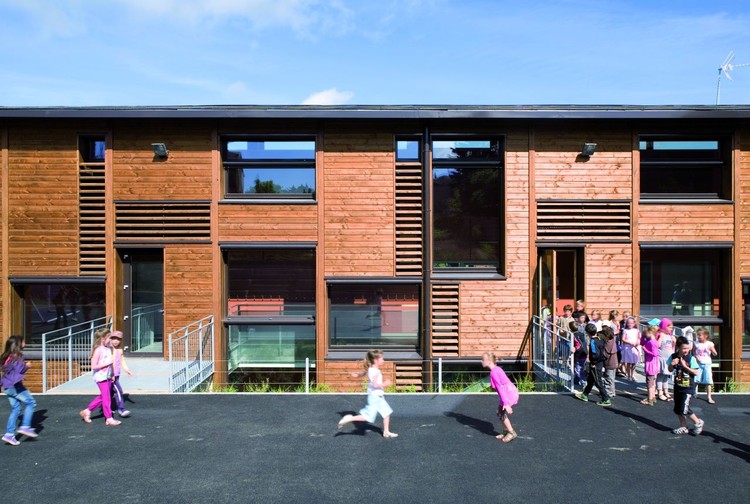 Text description provided by the architects. The authorities' bold decision to build a new kindergarten and primary school in the heart of Montrottier was a result of their desire to give this medieval village a new lease of life, and to recentre its development.

Key to the success of the venture was the availability of a site which, though steeply sloping (with a 9 m difference in height between the upper and lower boundaries), was the right size, and also close to the crèche, library and cinema. Seen from the surrounding undulating landscape, the new building embraces the slope, and is integrated into the general silhouette of the hilltop bastion. It adds to the overall morphological unity, and notably the density of the ensemble, while also affirming its contemporary character with a distinctive wooden form in a granite setting.

The separation of the complex into two blocks (one for the kindergarten, the other for the primary school) is in keeping with the topography. And the classrooms are set above the flat, sheltered playgrounds in such a way that the landscape enters into them, so to speak, with spectacular views off into the distance. The project was enthusiastically backed by the authorities. It can boast of advanced environmental features, like all of Tekhnê's designs, and does not rely on ostentatious effects.

There is a long, narrow profile that follows a north-north-east / south-south-west axis, with a north-facing slope. The dominant winds are cool and westerly, and there is a favourable orientation in relation to the sun. The utilisation of the outside spaces has been optimised.

The complex fits in closely with the nature of the site and its contours. The facades of its 2 rectangular sections, though not exactly parallel, face broadly south-east and north-west. They are unfussy in the way they perform their functions.

In order to raise the kindergarten to the level of the square, a base was constructed on Chemin de Gouttevine. It includes a municipal car park, which also makes a financial contribution to the operation.

The primary school is constructed on 2 levels, with superimposed walkways that allow the passage of air and light in both summer and winter. The classrooms make use of the incident sunlight, while benefitting from the calm of the surrounding farms and forests, and also avoiding the risk of overheating.

A glazed gallery offers views from the entrance to the complex on the square, and links up the 2 sections of the complex, notably with the shared lobby on the northern side of the primary school. In order to give the project the desired visibility, the kindergarten playground and the gable of the multi-purpose space were incorporated into the square.

The base of the project is in reinforced concrete, and it is integrated into the adjoining walls and flights of steps. Above it, the frames, facings and roof structure are in wood. The passageways, which also contribute to the thermal properties, illumination and acoustics of the classrooms and workshops, rise up above the northern side of the complex. Their inclined roofs are equipped with photovoltaic panels that offset some of the overall energy consumption.

The sunlit facades have large bay windows in a varied configuration, integrated into the regular pattern of the wood frame and the horizontal weatherboarding. Some of them are fitted with fixed horizontal slats, or screens that modulate the temperature inside the passageways as well as the illumination and the thermal conditions. The fronts of the classrooms, with their salient surrounding frames, have floor-to-ceiling and double-pane windows that alternate with vertical weatherboarding. 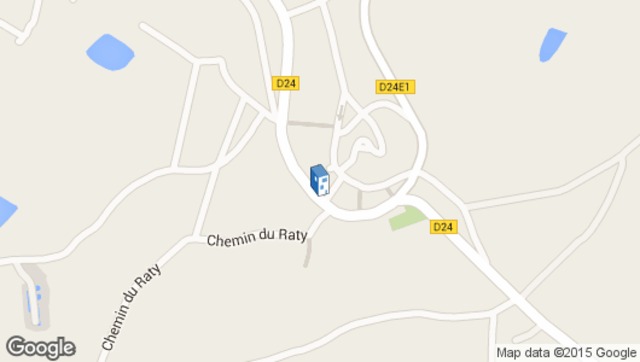 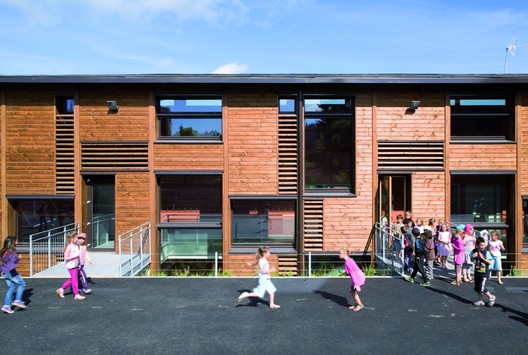