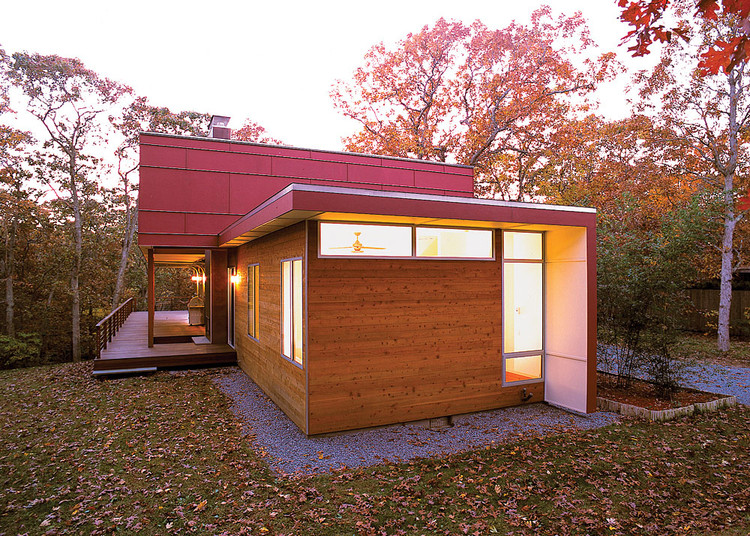 Text description provided by the architects. She started out by creating a list of the things she loves. What she produced seemed at first daunting and random: “natural light, fireplaces, barbecues, spending time with family/friends, a blanketing snowfall and the resulting silence…”. Through discussing the particulars of each item individually, the architect and his wife discovered how the change of the seasons played an important role in the way they live their lives. The active couple gleaned inspiration for their home from their experience of a nearby lake. The same body of water they would kayak on in the summer is re-invigorated each year anew when it freezes over in the winter for ice-skating. Just as the routine of one activity begins to lose its allure, it is replaced by the newness of another. They wanted their home to have the same flexibility and range both in its use of space and in its details that would interact with the environment and evolve over time.

This interaction began with a material palette that could be applied both indoors and out. Cedar, concrete, Santos mahogany decking, frosted glass, slate, aluminum and copper slip easily from inside to out, blurring the line between the two. The front entry and interior stair are made from mahogany decking. Light seeps through the boards through two stories giving a feel of openness. Mahogany decking from the private deck off the master bath becomes the shower floor giving the already exposed space a more outdoor feel. The double-sided indoor/outdoor fireplace is faced with crimped copper that is already reaching a rich patina. A Spanish cedar entrance door, the first object one comes in contact with, is forever changing. This door incorporates a window with a large air space into which small pieces of beach glass are deposited after daily walks on the beach, thus slowly changing the color and intensity of light as the collection increases.

As materials were selected to span between indoors and out, they were also adapted to perform in a diversity of applications. The jatoba floor in the kitchen wraps up the side of the island to double as a countertop. Its natural hardness and water resistant OS Hardwax finish make it equally desirable for both applications. OS Hardwax is an environmentally friendly natural sealer that is water and stain resistant, safe for children, and produces no off-gassing. Accordingly, this oil was also appropriate for the mahogany veneer plywood lining of the MDF kitchen cabinets.

Over time, these oiled hardwood and veneered surfaces will slowly darken. Outside, rough sawn tongue and groove Western Red cedar siding defines the spaces beneath the house’s red-dyed concrete paneled shell. In contrast to the permanence and vibrancy of the panels, the boards will mature to a mellow, weathered, silvery gray conducting their own dialogue with the elements. In and through time the house will mature and evolve. It is designed to be in dialogue with the environment and with its owners, changing in subtle ways only noticeable to those who really know it.