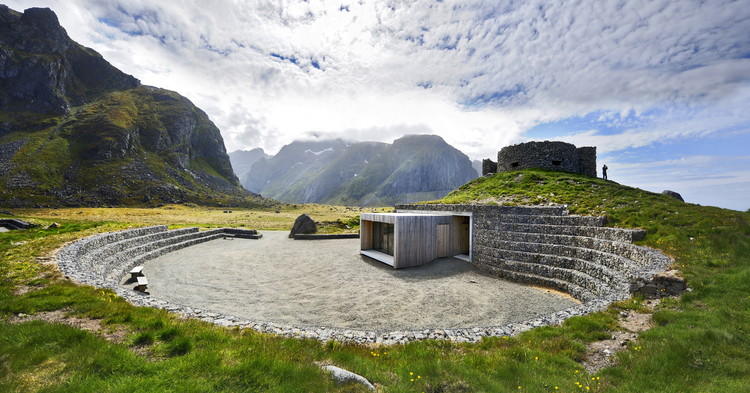 Eggum is a community which lies on the seaward side of Vestvågøy in Lofoten. The former fishing village faces directly out to sea, on a small, level strip of land between steep cliffs and the sea. There are not many fishermen left at Eggum, but a good many people still live there. During the summer season Eggum is a very popular place to come to see the midnight sun. Apart from North Cape, Eggum is claimed to be the best place for such observations. The tourists gather in the area round Kvalhausen, which lies a little way past Eggum itself. Kvalhausen is a hill which was used as a radar station by the occupying German forces during the second world war. The foundation wall around the old radar station still stands. ”The Fort” as the locals call it, is a local landmark.

In winter 2004 Snøhetta won the parallel commission at Eggum, which is part of the Norwegian Public Roads Administration’s E10 tourist route project through Lofoten. The task was to solve the traffic situation around Kvalhausen, where a fine summer night will see very many campervans, some cars and a few buses. In addition a service building was to be designed to suit this special site.

Snøhetta’s project won with its sensitive approach to the site and its strong and consistent focus on conveying the qualities of the place as an attraction rather than primarily supplying an architectural attraction.

The project consists of a service building which lies within an amphitheatre which also allows room for car parking. In two separate areas outside the amphitheatre are spaces for campervans to assemble. Gabion walls were used throughout the site to limit parking space and to create a unifying effect.

The guiding principle throughout the project has been suitability to the location and exploiting the sites opportunities. The terrain itself has determined the location of assembly areas for campervans, parking for cars and the siting of the service building itself. An existing borrow pit in the Kvalhausen hill has been used to locate the service building and car parking. The assembly areas for campervans have been located in such a way that every parked vehicle has a view of the sea.

The choice of materials has been largely determined by the site itself. All the gabions have been filled with stone from excavation for the building. Gravel and sand were separated out and used as back fill. This corresponds well with the ruins of the radar station. Those walls were also built of dressed morainic stone, although in this case set in concrete.

It was vital to place the service building in the landscape discreetly. The building is subordinate to the landscape and ”The Fort”. The architectural expression is simple, taut and modern. It functions as a multi purpose room of 20 m2 with kitchen facilities and toilets. The building consists of two separate constructive elements: a concrete frame located into the terrain and a wooden volume which extends from the concrete frame. The toilets are located behind the main room. The concrete frame functions as both a framework for the wooden building and a back wall against the hillside. The gabions finish against the concrete frame and connect the building with the landscaping. The wooden volume is clad both inside and outside with thick planking of driftwood gathered from a beach a few hundred metres from the building. The same applies to the roof. The planks vary in width and are untreated so as to achieve a natural patination. The interior floor of the multi purpose room is of polished and oiled concrete. The emphasis has been on using rough, natural materials and to combine these with consistent detailing.

By emphasising the site’s qualities per se and recognising the need to allow future visitors to Eggum to have the opportunity to enjoy a personal experience of this powerful landscape, we have completed a project which provides the location with the necessary functions within a taut but understated architectural framework. 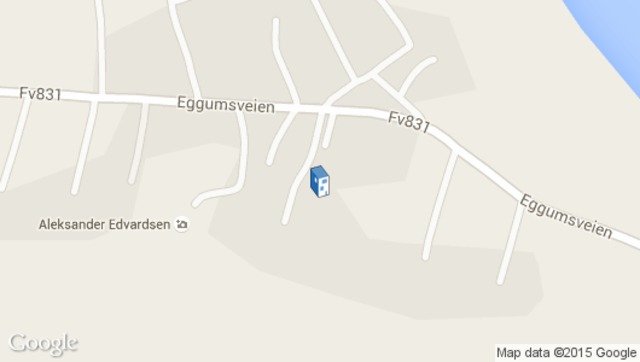