Save
One One Eagle Street / Cox Rayner Architects 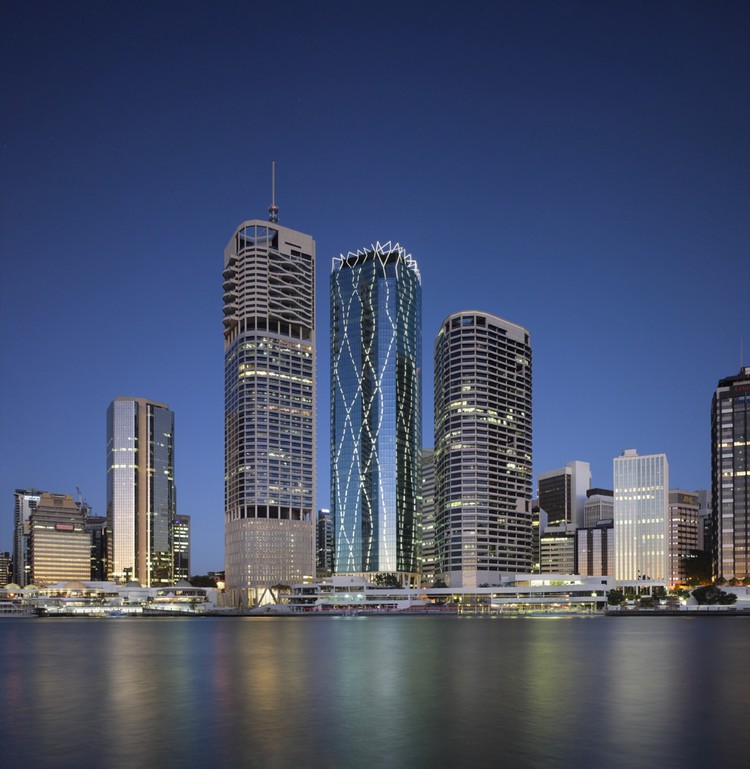 111 Eagle Street forms the centrepiece of a trio of towers that mark Brisbane’s renowned Riverside Precinct. It occupies a site that comprises the loading docks and basement carpark access to the existing neighbouring towers either side. The site’s sever constraint was the lack of bearing points due to those existing encumbrances.

From this constraint evolved a structural solution which defines the tower, a web of trunks and branches developed from an algorithm called ‘growing towards the light’. This algorithm was chosen as it was not only significantly more efficient than other solutions, but enabled a site specific architecture – rare in commercial tower design – to evolve, related to Brisbane’s most iconic Fig trees which foreground the site.

The tower comprises 54 levels, 42 of which are for offices, with the base over two levels, the upper for corporate access enabling the ground to act as internal public plaza and dining space.

The structure is designed to be read distinctively by oscillating illumination at night, and subtly by day respecting Harry Seidler’s adjoining towers. A further aim was to create a new tower architectural typology which embodies the ‘subtropical river city’ and it has been universally recognised for this accomplishment.

Conceptual Framework
The client’s key demands were for a commercial tower which engaged the public and befitted the city’s ‘Riverside’ precinct of exceptional architecture and space. It was through unexpected constraint – that of little bearing capacity on the site – that architecture and engineering united to create such an outcome.

Our philosophy was to create a tower that would be both publicly recognised as belonging to the subtropics and recognised as site-specific, this aspect rarely if ever associated with the commercial office tower. That philosophy was achieved by utilising the structural solution of the constraint to create an architecture that is responsive to the one significant natural landscape element remaining in the precinct from history – Brisbane’s cluster of iconic CBD fig trees.

Our mutual aim was to push the boundaries of environmental performance for the office towers, catalysed by the structural geometry which produced a minimum of material requirement.

Public and Cultural Benefits
The primary public/cultural benefit has been the universal public and media appraisal of an office tower contributing dramatically to the cultural identity of Brisbane as a city. It has been recognised by day and night as enriching and enlivening the urban fabric from its ‘public’ base to its distinctive skyline. A direct physical public benefit is the tower base, which ‘folds up’ from the Riverside and Riparian plazas to form its own internal public plaza and restaurant as a retreat in the city and much-used thoroughfare from ferry terminal to CBD.

Relationship of Built Form to Context
The tower forms a distinctive yet complimentary central element with its iconic Seidler-designed neighbours, the three towers stepping down in sequence. Its plan is shaped to accentuate the geometries of the three towers working together. The structure is designed to one of several thousand algorithms explored for efficiency, it being called ‘growing toward the light’, chosen because it also created a synergy with the structure and ascending narrowness of the branches of the fig trees that dominate the Riverside precinct’s foreground.

Program Resolution
The design meets the client’s desire for as large a floorplate as possible within the covenant constraints of the original Seidler-led precinct master plan with optimised floorplate efficiencies. These range from 81% to 86%, more than fulfilling the client’s targets. The client’s other major aspiration – for a tower that surpassed the service, movement and office space experience of all existing office towers in the CBD was achieved both by commitment to design refinement and by an unusual level of client collaboration.

Allied Disciplines
The obvious is the collaboration between architect and key structural engineer Tristram Carfrae. The design is the outcome of over twenty years of maturing this relationship over several structures with him, most notably the Kurilpa Bridge and Helix Bridge Singapore.

The artist/designer Alexander Loterzstain was engaged in the lighting program of the structure, entitled ‘Breathe’, and Sandra Selig created the backdrop to the ground floor Philip Johnson restaurant.

Cost/Value Outcome
The 54 level tower, providing 62,000m2 of office space over 44 levels, was constructed for $341 million, at a very efficient value of $5,500/m2 for a Premium Grade, 6 Star Green Star office tower. This efficiency is primarily due to combined structural and office floorspace efficiency.

Sustainability
111 Eagle Street is accredited to 6 Star Green Star (v2 Office) Design rating and 5 star NABERS Energy rating. Notwithstanding these achievements, it is recognised that the highest rating levels alone do not substantiate awardable sustainable architecture.

The fundamental differentiation in this tower is that it has radically re-invented high rise tower structure in a way that utilises 20% less material than a conventional tower, and that embodies nature in its evolution and its expression. The structure is exacted to an algorithm called ‘growing towards the light’ – the first use of such an algorithm in tower design – enabling it to diminish in size as it rises, to columns of 300mm square at the top. The result is a site-specific reciprocation with the two historic Fig trees in the tower’s foreground for all to experience.

The building and its public spaces have gained an immediate public embrace, both for its expression, and for its role in enriching the social realm of the city due in particular to the ground plane acting as public plaza. This is achieved by elevating the corporate level to a mezzanine, enabling the ground level to be an extension of the Seidler-initiated Riverside Plaza spaces, accessible to all.

The detail resolution of the tower’s façade completes a holistic sustainability solution, integrating structure, solar-responsive sunscreens, optimised daylight penetration and perimeter fresh air intake in the one system. This system couples with gas-fired Trigeneration enabling the waste heat to produce the building’s chilled water, the great water component being also treated and distributed throughout the tower. In summary, 111 Eagle Street is a physical, visual and social embodiment of sustainable commercial tower architecture. 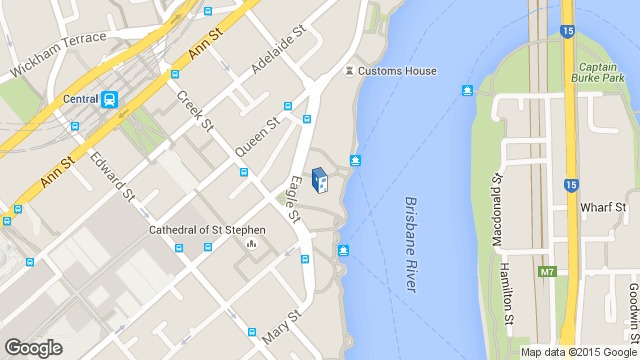