Developed by Spacescape, Airport City Stockholm, in cooperation with Swedavia Swedish Airports (state), Sigtuna municipality, and Arlandastad Holding (private real estate), has a new urban design strategy and urban plan that envisions a unique airport city which emphasizes urban qualities and places sustainability in focus. Such rapid expansion has placed distinct demands on planning, which has resulted in this collaborative effort. Creating these foundations, along with offering the world within walking distance, will increase value and attract even more people and businesses. More images and architects' description after the break.

The Stockholm Metropolitan Region and Arlanda Airport have in recent years been experiencing very high rates of growth. Around Arlanda, 1000 new jobs are created every year and the Sigtuna municipality is one of the fastest growing in Sweden. The city’s attractiveness is unbeatable. Its diversity of meeting places and people is the basis of all growth. An attractive and vibrant airport city requires many meeting places. These meetings primarily occur in public spaces in the city. The city is created by the people and spaces in it.

Its location by Arlanda airport in the growing Stockholm region between Stockholm and Uppsala with its railways, roads and air traffic makes Airport City Stockholm hard to beat. Regardless of the ups and downs of the economy, people and businesses are finding their way to our region. We compete with our knowledge. Knowledge clusters can develop by creating innovative and exciting urban settings. This urban design strategy is the basis for building ”a living city, connected to the world”.

In dialogue between the three partners (Sigtuna, Swedavia and Arlandastad Holding), five overall goals have been developed for Airport City Stockholm and its urban districts. These five goals are in line with current plans for the region, the municipality and the airport and are the basis for the urban design strategy. The goals for the airport city are to be sustainable, commercial, accessible, urban and eco-friendly. These goals make Airport City Stockholm a unique urban development project: sustainable, commercial, accessible, urban, and eco-friendly.

Sky City
Sky City is the airport city’s ”Downtown”, a dense city centre with pedestrian-friendly streets and beautiful parks. It has a mixture of offices and hotels and every conceivable service for both workers and travellers. This unique international atmosphere is one step away from the rest of the world.

Park City
Park City is the airport entrance. This district includes long-term parking, car rental firms and car services. As the airport city grows, this district will develop to include offices, shops and hotels. The district is characterised by greenery with trees, parks and natural landscapes.

DriveLAB Stockholm
DriveLAB Stockholm, by E4 highway, is a hub for training and development in road safety and green transports. This is a unique cluster where companies, researchers and government agencies have the opportunity to learn from each other – an inspiring arena for tomorrow’s automotive industry

Märsta Business Area
Västra Arlandastad has a diverse range of companies, everything from logistics and cargo to retail, light industries, construction and craftsmen. The district is located by the E4 in Märsta. It has an abundance of services for the people working here.

Rosersberg is conveniently located directly by the E4 between Stockholm, Uppsala and the airport. Its cargo terminal has developed into a logistics node for both large and small companies. It is walking distance to Rosersberg commuter train station with trains to Märsta and central Stockholm. The district is characterized by warehouses and large parking and access areas. The goal is to make Rosersberg into one of the world’s most environmentally smart logistic centres.

The vision formulated by the partners behind Airport City Stockholm also emphasizes sustainable growth. To ensure that the airport city is built in a sustainable way, it will be built according to guidelines based on both national standards and the international certification systems LEED Neighborhood and BREEAM Communities. The goal is for the entire airport city to be able to be certified for sustainability if these guidelines are followed: Land and building re-use, Green ecological landscape, Close to fast public transport, Walkable street network, Access to public space, Flexible compact parking, Active frontages, Land use mix by location, Compact urban form, and Energy and resource efficient systems.

The guidelines for urban design ensure that the city is always sustainable, but a framework for long-term expansion is also needed. This framework is based on previously-made investments. A good framework is flexible in that it can be adapted as the city grows and changed while it creates predictability for future developments. The following three development principles describe development in different scales: 1) the city grow from the nodes; 2) districts grow by infrastructure; 3) land and plots grow based on places. These planning phases also match the Swedish plan process and the principles in BREEAM Communities and LEED Neighborhood – from the general to the specific. 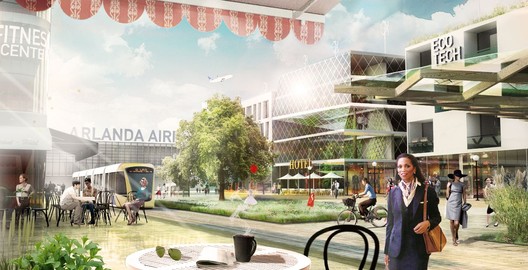