Designed by Garrett Rock, the New Acadia, Retrofitting Urban Decay proposal was the winning entry for one of six sites in the [Imagine Downtown] Lafayette Design Competition which aims to be a re-imagination of urban density within the neighborhood’s city core. The design offers Lafayette an alternative mode of development that stimulates street life in hopes of attracting a young, creative class that are leaving the city for more amenity-rich urban enclaves. More images and architects’ description after the break.

Lafayette, like many mid-sized American cities, is losing a young and highly-educated creative class of millennials. These children of baby boomers, raised most often in a suburban condition, are seeking out stimulation brought about by more walkable cities defined by their street life.

If cities like Lafayette don’t properly invest in their downtowns, they will lose a highly sought after demographic to cities like Austin and Portland whose vibrant public image has attracted a renewed growth. Lafayette can exploit its position as a central hub for South Louisiana by solidifying its downtown through an investment in mixed-use and pedestrian-friendly developments.

The site provides an interesting opportunity for developing a mixed-use neighborhood because of its location hinging between Downtown Lafayette and the University of Louisiana’s campus. Despite the promising location linking the primary business district with a focal point of higher education, the neighborhood remains a collection of underperforming surface parking lots and underutilized low-rise buildings.

New Acadia is a response to a growing demand for pedestrian-friendly and self-sufficient neighborhoods within the urban core. By creating a layering of diverse programs over the site, the neighborhood is used more evenly and efficiently. Local residents can benefit from reduced travel times by commuting closer and spending less money on transportation.

Convent Street is closed to car traffic between Johnston Street and Lee Avenue; it becomes a spine for pedestrians and bikers to permeate across the site. The blocks between Main Street and Jefferson Street are divided between north and south to create an open axis that creates a central heart of the neighborhood. Street lanes are narrowed to twelve feet to slow drivers down and a dedicated two-way bike lane is introduced on Johnston Street linking the site with ULL’s campus.

The neighborhood is designed around self-sufficiency and multiplicity of program. Retail and restaurants occupy the ground floor while housing, offices, and institutions constitute the upper floors; three to five story buildings replace current single story structures to increase density in a site appropriate manner. A variation in housing types, from micro-unit studio apartments aimed at college-aged students to three-story town homes geared toward families, ensures the neighborhood’s diversity of user groups.

The network of interstitial space created leaves an exceptional situation for urbanism to materialize. The streetscape is arranged around a series of public spaces, or nodes, that act as hubs of interconnected informal social spaces that mediate between home and work. The landscape and site elements are arranged in rows; this module of continuous variation provides a cohesive language for site organization. Finally, the site accommodates all modes of transportation to act seamlessly together in hopes that residents will opt to walk and bike more safely and efficiently. 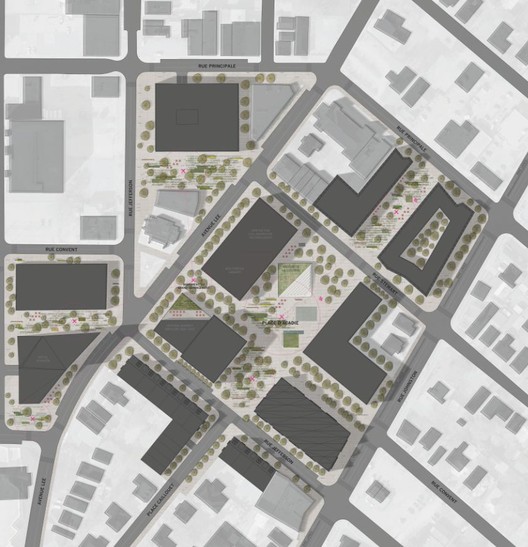