Dmytro Aranchii Architects shared with us their proposal for the cultural space on the Andriivskyi descent, an educational competition sponsored by ESTA Holding earlier this year. The challenge was to create an architectural concept of the Yunist factory former site development, and out of 1 hectare, the competition terms determined the cultural space as 10-15 percent of the area linked to the Andriivskyi descent, and the rest of it was for commercial use. This consists of a multifunctional cultural space with an integrated chamber music hall. Besides the hall, the architects suggested to place a literature space in the cultural center suitable for seminars, conferences, meetings of readers and writers, poets and essayists, as there is a lack of such place in Kyiv. More images and architects' description after the break.

This is about reconstruction of former “Yunist” factory: the developer plans to occupy the main territory with the area of 1 ha with offices and other commercial objects, yet 2 000 sq. meters are allocated for the cultural component. The competition terms defined a mission to place a hall for chamber music concerts in the designed building.

In the proposed literature space, the auditorium for such meetings can be reached from ground and first floors of the building. In addition, literature research center, bookshop, library/mediatheque, ticket-desk, info-center and excursion bureau as well as lounge zone and café, that tend to become a popular place for informal communication, are situated here. From the same level you can get both to the concert hall with 125 seats, and in the production center and a recording studio.

On the first and second floors it`s suggested to arrange temporary exhibition halls with mobile partitions as well as permanent exhibition. However architects realize that creating a new collection of outstanding art works is a difficult task, that is why they suggest either taking them in long-term leasing or attracting private art lover, wishing to make his collection available to the general public – giving as an example the story of the Thyssen-Bornemisza collection, now exhibited in Madrid.

On the second floor there is also an educational center planned, and on the half underground floor – administrative and  utility rooms and parking. A special role is played by a courtyard, partially overlapped cantilevered upper floors of offsets: they can be held in the open air exhibitions, performances and any other events.

Abstractly interpreted gable roof in agreement to the climatic conditions, and harmonized with the surrounding buildings, while the parametric facades are covered with recycled in accordance with the theory of fractals national Ukrainian ornament of flowers stars.

This project was an educational contest without implementation of the architectural ideas suggested. Esta Holding is the owner of the land plot and the real contest will be held later within respected professional architects under supervision of Public Council and Cultural institutions, due to the location being a part of historical area under state preservation. 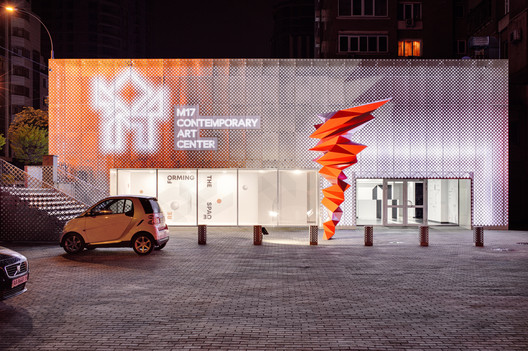