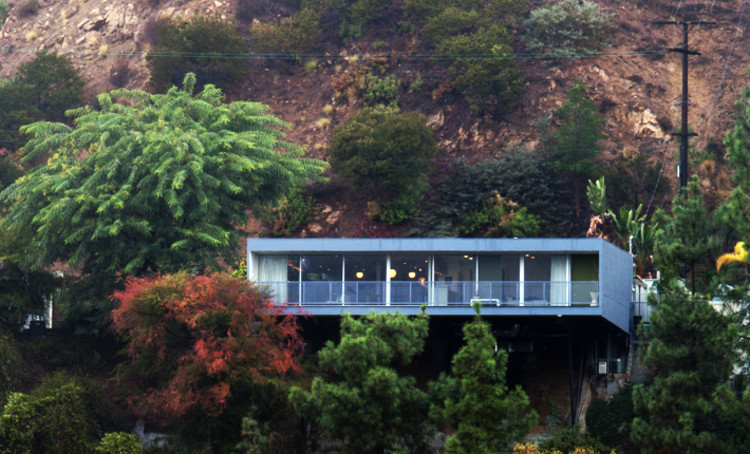 Text description provided by the architects. The clients approached J,P:A with a program that included the addition of another bedroom suite, thinking that it might be placed on top of the existing structure. J,P:A demurred, resisting the typical ambition to make something more of the program than the client requested, an alien gem to outshine the original. Instead, recognizing that lurking within an existing amalgam of fifty years of casual changes and accretions was a more perfect figure that would be ruined if yet something more were added on, J,P:A suggested making less.

Part design and part archeology, this project is a demonstration of the positive virtue of restraint. The composite design process followed Michelangelo’s sculptural practice of “removing everything that was not it” and then adding in all that was necessary to make it be the best possible version of itself. In this case “it” was an iconic “tube” partis, hiding within an unremarkable contractor-designed box-on-stilts.

J,P:A recognized that the existing house represented a mid-century diamond in the rough: a rare “tube” scheme, precursor to the popular contemporary “continuous surface” project type. As the first expression of the tectonic imperatives of the “continuous surface” idea, the tube embodies a distinctly modernist version of the “child’s drawing of the house,” replacing the rhetorical elements of the classical original with the topological/gaussian clarity of the machine for living. In this idealized distillation of the problem of dwelling, the envelope is seen as primarily separating inside from outside, rather than sheltering down from up. Here the Sessa Residence achieves the idealization of that ideal—since it is held up in the air and thus free of any association with the earth, the tube expression finds its apotheosis, with all sides equal: no difference between the ground plane and the roof, between the land and the sky. Open on the ends, it reasserts the most primal orientation to the connection between inside and outside—that of the cave mouth overlooking the savannah.

In this version of the partis, though, a distinctly Southern California difference is registered between the two open ends: one looks back to the hillside, opening onto a shaded outdoor patio—the cave—that draws the free flowing interior spaces out to the balmy California climate, while the other end surveys the wide open vistas of Nichols Canyon and lights of downtown—the savannah beyond. Thus the interior itself is variously oriented: to a through-view experience, from the enclosed back patio areas, through the house and on to the distant lights of the city out beyond the canyon, or to the mood of the directly adjacent outdoors, visually present when the large sliding glass doors are closed, and actually there when they are opened.

J,P:A proposed that instead of adding new space at this time, the effort should be focused on refining the existing structure, to make it more perfect in its own terms by revealing the hidden lines of that logic and helping them to their own fulfillment. So, excess partitions and a fireplace were scraped off the interior walls of the tube, punched windows in the open ends were replaced with full walls of sliding glass doors, a new period kitchen was installed and the roof and structure were replaced, this time free of dropped soffits. Finally, a new entry court was designed to allow the space to flow unimpeded through the tube to the outside and beyond while preserving privacy—always important when living in a glass house! The result is exemplary of the Case Study tradition and California lifestyle of indoor/outdoor living, a perfect frame for the client’s serious collection of postwar furniture and art. The originally-planned bedroom addition will be dealt with in a later phase, tucked beneath a future carport developed off to the side where it would not compromise the rehabilitated tube. The project as shown here depicts the perfection of those tube lines, prior to the addition of the new bedroom suite and carport. 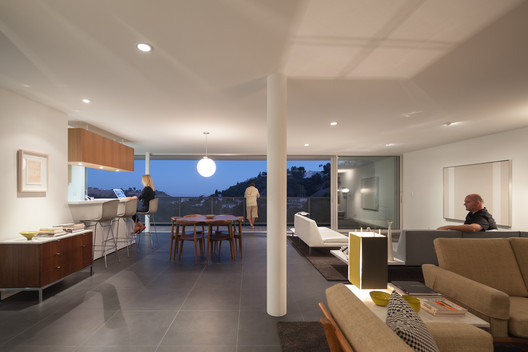