In this proposal for the Central Mosque of Pristina, Asar Consulting Engineers decided to use the traditional mosque components for a kind of new mosque design in a new form and a different combination to make it more fitting for its time and location. This new combination is done with the aim of keeping the functional value of different components and increasing their efficiency. One of the elements of mosque architecture which can’t be separated from this design is green and open space. This space is so important that it should become an element at the entrance of the mosque. More images and architects' description after the break.

In this competition, because of land slope, irregular geometry and high gross area of the building, it was not possible to design an independent yard at the same level so in this proposal an extra floor more than the competition program has been design as pilot and usable as the green and open space between the land and the mosque building. This green space can acts as the entrance of the mosque or the gathering space and prevents the human traffic in to the city.

The Porch, as the semi open element of past mosque architecture has been the connector of the open space (yard) and close space of the mosque. In this proposal as this role of the Porch has been maintained, a part of transforming people to mosque floors has been left to Porch to make it more efficient and lively. The minaret and the dome are defined in the continuity of the Porch to create visual continuity and also create public access more than traditional architecture.

According to the competition program, two levels of underground levels are for public uses like shops, library, conference hall and etc. and ground floor and above levels are for the main court of the mosque. In this proposal for the proper functional separation of these two completely different parts in working hours, various users and type of service, one pilot floor has been designed between these two parts that separate them even physically.

This floor prevents the disruption of the urban space between main boulevard on the east of the site and the pedestrian axis and residential district on the west of the site by the mosque building and creates visual and functional connection. This opening in the section helps to provide natural light for most of underground levels that need natural light but can’t use it because their underground location. 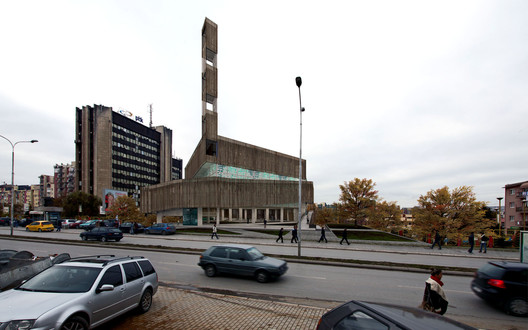