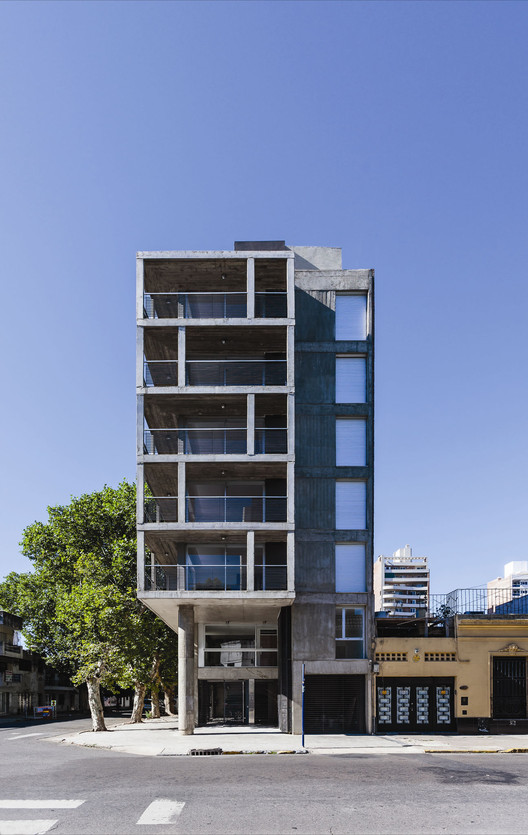 Text description provided by the architects. A peculiar building lot, small and on a corner, determined the layout scheme of the project: main areas in relation to the street facing north and east, and building services (stairwell, elevator and bathrooms) towards the party wall. The lot is fully occupied, and generates a facade plane that exceeds the 1.20m building line allowed in most of the perimeter. The full potential of the lot is exploited.

The repetition of the typical floor plan is characterized by the use of the structural frame; this is where the apartment balconies are located. This element that characterizes and formally identifies the building is composed of exposed concrete slabs and interspersed columns, and consolidates the corner by reinstating the right angle of contact of the two streets along the height of the building. The cantilevered structural frame is supported, at its rear, by an interior frame of walls and beams that make up the load bearing structure of the building.

The first floor – intended for offices – acts as a transition between the ground level and the superimposed frame of the balconies. This level is cut at the corner and dematerializes the corner, generating a double-height space that provides an urban scale to the access.

In this type of condo buildings, we address repetition and differences. In this project, the difference lies in the spatiality of the ground floor, making the most out of a free plan, and thus giving visual continuity between the interior of the building and the public space. The use of an open frame of metal profiles along the entire perimeter physically closes the ground floor but not visually.

There are no physical limits between the entrance hall and the parking area, making the most out of the spatial continuity allowed by a free plan. The limit is proposed simply by using a glossy material like black granite in the hall, as opposed to the opacity of the gray tile floor, and by lowering the ceiling level with a suspended ceiling as opposed to the roughness of the exposed concrete slab. 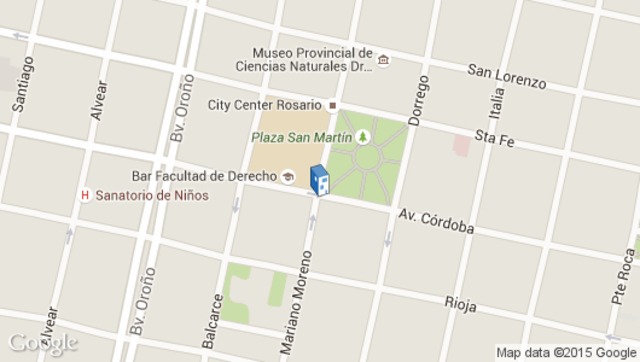