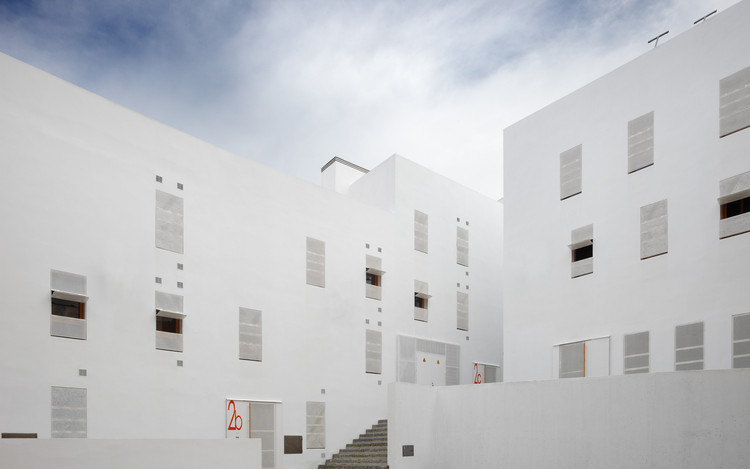 Text description provided by the architects. We submitted an entry to the competition attracted by the uniqueness and attractiveness of Cadiz, a city with a decadent character, somewhat forgotten and marginalized, but with a richness that transcends its own space and time, the trace and reflection of the different cultures that have marked its captivating personality over the centuries.

Oblivion has been its great ally and the sea its powerful defense, and so it presents itself to us today, true to its scale, to its color, with an infinite variety of whites tinted by natural light, and its texture, as poetic action of time. Exempt from the catastrophic developments that in past decades have ruined other cities of similar worth, or as a “lesser evil” have become caricatures of their former selves.

Competitions like these are essential to set new criteria for intervention in historic districts, opening the way for reflection and discussion which will certainly yield solutions and strategies, perhaps currently unseen.

We must question performance models that are currently presented as safe guidelines, and instead are producing tremendous havoc in our historic districts. The demolition of small parts to be replaced by new units, subject to rules that include only formal elements, are resulting in a gross, picturesque architecture, a pitiful caricature of what the original was.

It is not simply a matter of protection regulations. We must keep in mind that it is all these little pieces, anonymous and seemingly worthless, what is generating the expression and character of the city. It is necessary to intervene with further analysis, giving meaning to each piece in the huge puzzle that forms the city. We must act with extreme sensibility, taking into account values that are the product of memory and tradition, which have remained invariant over the passage of different cultures.

It is necessary to find the balance between the image of the city, its housing and its inhabitants. It is clear that a city of our time should not be reduced to beautiful scenery, incompatible with the minimum requirements of housing today. It is surprising to see the living situation of families, sharing toilets and kitchen hearths, in substandard housing reduced to enclosures smaller than 15 square meters, with no natural light or ventilation.

They are living conditions that a modern society should not allow. This is where we must produce the balance we mentioned above. We must act with enormous caution, considering consolidation and restoration where possible, giving these spaces the necessary services to accommodate a decent life.

In any case, what we must avoid at all costs is the creation of generic neighborhoods after the replacement of buildings, neighborhoods that could exist elsewhere in the world, outside the identity and tradition of the city.

Identity of the place: references of our proposal

The alley as urban gap. The yard, the roofs.

We discovered the interesting trace of the medieval city, a trace where the void becomes the generator of the urban fabric.

The power of the mysterious city, with a subtle play of filters between the street and the interior life. The Cancela Alley, the Moros Alley, whitewashed narrow gaps. Some small hole reveals the secret presence of its inhabitants. Its proportions prevent the sun from reaching the ground plane, its orientations allow sea breezes to produce the circulation of fresh drafts.

At the end of the Moros Alley, a metal gate painted in snuff colored enamel stands over the long and tense lime canvas.

Behind the gate is the hallway, a backlit space, dark, as a filter with no perceptible dimensions, a dark filter that marks the transition between public and private space.

A turn along the circulation introduces us into the courtyard, with its narrow proportions, the necessary for the perfect daylight lighting, sifted through the various boards in the whitewashed walls, and ventilation. The space is perceived vertically, a void as an attachment or boundary between the individual and the collective, between light and darkness.

The long and narrow proportion establishes the necessary privacy for the various dwellings that overlook it.

Between the courtyard and the dwellings are the corralas, as a new filter for privacy.

The space becomes a way of life due to the use of its inhabitants, it reflects the people’s daily life, everything appears with extreme naturalness: pots, plants, geraniums…

At the end of the courtyard, and again after a turn, appear the stairs as a common space. Crossed views, mysterious, covered in light, mark the vertical circulation.

The roof, a space that opens up again to the city, in a horizontal plane that seems almost continuous, stretches into the horizon. 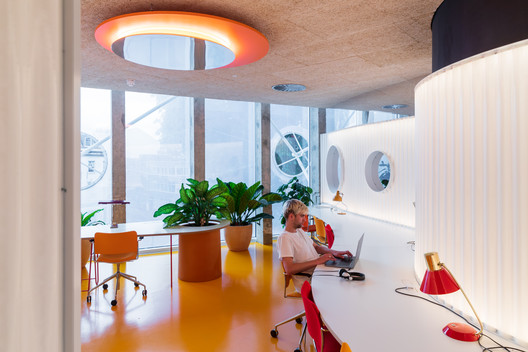