'MonsterScape', an exhibition display design for Monster Exhibition 2013 organized by Recover & Rebuild Japanese art & design, was a concept created by Hannat Architects to exhibit monsters as a metaphor of disaster and to prevent people’s consciousness of disaster from diminishing. On display this past February, the organizer of the event wanted this exhibition to be something not to tell the misery of disaster but to recall “important things" that tend to be forgotten in everyday life, and visitors to enjoy art and design. More images and architects' description after the break.

Danger of the disasters always hid behind, and the tsunami let scenery of the coast of Tohoku area undergo a complete change. The concept of this exhibition design is to create impressive landscape where monsters/disasters lie in. Using three-dimensional CAD, the lattice form skeleton structure, of which motif was mountains and waves, was made by corrugated cardboard and covered with the paper skin made of innumerable tetrahedrons. As soon as the skeleton was covered with the paper skin as if to be covered with fur, its appearance metamorphoses into a monster with display functions.

The art works put on the top of the tetrahedron erase the existence of gravity and gives a mysterious sense.  Since ceramic and metal art works were expected, experiments were repeated beforehand and tolerable strength to weight with paper was achieved.  The two structures, a male and female, were placed in the center of 10m x 13m x 3m high space to surround a whirlpool and created display lines of flow.  People are led to the space by the specific figure and drift to the internal space while appreciating the display works.

Behind the display structure, a picture installation, 3.11 Sendai Map, by anno lab and infographics, Datascape of Disaster, by Sendai School of Design (SSD) were lined up. 3.11 Sendai Map shows photos of Sendai City taken right after 3.11 and the heights of tsunami by putting a hand on a detailed city model of Sendai and a map of the Coast of Tohoku. Datascape of Disaster conveys the earthquake disaster data, which is generally hard to understand, in graphic more clearly. These came all true from the thought "to have people enjoy art, and to want them to think about the earthquake disaster only a little last" of the organizer.

The paper folding tetrahedron became approximately 10,000, and this was accomplished by the cooperation of many volunteers. Enormous time and labor were spent on folding origami by hand. The exhibition called out a total of approximately 6,000 people in six days. It is the first this time, but the organizer is going to continue such a trial. 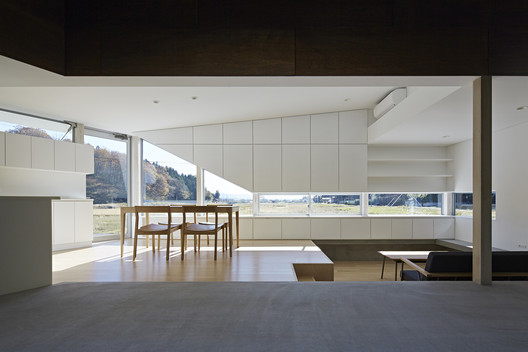