Designed by Tarh O Amayesh, their proposal for the Central Mosque of Pristina, the fundamental principal of the project comes from the definition of Mosque, which is a place for praying and going from body to soul. The prayer is someone who connects the earth to the sky, while the mosque is a space for the becoming. Becoming is a symbol of movement and movement is the source of the mosque (the house of god). This plan is shaped in this framework as the mosque is a symbol of ascending sprit from soil to the sky, from city to the Kiblah. More images and architects' description after the break.

The words such as direction, plaza, water, function and plan, shape, beauty fullness and sustainability create this architectural text. The way of composing these elements and creating a space due to this architectural concept produces a complicated space and full of findings and changes.

This project is located in urban area with natural topography. The level of this project in south is 7 meters higher from its north. This urban location gives the project an identity to connect different levels of the city. In proposed plan directions shape the project from inside and outside. From outside it determines the way of cars, pedestrian’s access to the project and its entrances and from inside it shows the penetration of project for connecting different parts of the city around it. The main entrance of the project from urban plaza is located in south and Alley besides this passing through the Project which is shaping related activities of Mosque around it to create vibration in the project.

The Middle path started from entrance urban plaza of the project and by passing through it and opening to level -1 and -2 It will reach to south plaza which is located in the level of urban fabric in the south. This path is not just connecting but also helps air flow and natural ventilation in underground levels which helps to save Energy.

The composition of open and closed spaces creates the concept of the project. Some plazas (open and green spaces) are designed in south, North and East part of the project to support going from city to Mosque, from this world to spiritual space. On the other hand this space connects the body to the soul, this world and the other world with mediating space such as plaza. Another plaza is designed in level -2 to help for supporting light and natural air for underground levels. It also creates the imagination of ascending the Mosque from the inside of soil. So the project is not coming out of the soil surface but from the depth of earth.

The green plaza with water is a symbol of being near to the nature. The order of nature is a sign of God. This is the way the Mosque is connected to nature and natural order. Plants and water give the environment the sense of softness and helping the living situation.

The body of the project is shaped by curves with rotation which is a symbol of  The Dome. The Dome is the sign in spiritual Architecture. In this project a shell comes from down by rotation and being peaceful by directing to Kiblah. This peace creates a surface in dimensions of 63 m×40 m and 99 names of ALLAH(Based on Quran) are written on it in 40 languages. The door of the Mosque is designed by Moraghah. The symbolic Minarets beside the epigraph is showing the coming up of the epigraph and moving to the sky. The Minarets are 103 meters high. They have steps and elevators for going up to enjoy the panoramic view of the city.

The separation and synergy of entrances create complicated and attractive functions of the project. The spaces for Ablution area, toilets and lockers are shaped separately for men and women in level -3.9. The locations of plazas are shaped in coordination with plan to support light and natural air for service spaces. The function of these plazas in different levels and situations in connection with penetrating corridors creates sustainability.

The complex related to the Imam of mosque is designed in connection with each other to create the maximum access and comfort. In this project the concept of structure is not the same as other projects. Here the structural and architectural concepts are joined together to answer different needs of each other. In this plan the final size of structural elements does not come out of mathematical equation and economic limitations.

The structure of this project is shaped from combining two captive logics. In underground levels which usually include parking spaces, shops and services we have fewer problems in locating vertical structural elements and the details of structural elements follow regular criteria and the only problem is fitting this pattern with the specifications that are forced to the project from upper levels.

In upper levels we face with vast area such as praying areas for men and women. These long spans are covered with long beams that from one side they are placed on surrounding columns and from other side are placed on a central core. This central core should bear the transferred load from beams and sloped ceiling. In upper levels the height of each floor is considered in the way that the height of beams does not make any problem for the function of that floor.

The Minaretsare considered as empty cores with square cross section which go up in their entire height. The final layer of roof which is sloped in to two surfaces with radial patterns is covered with two light materials and the main load that it supports in every triangle piece is the snow load.

Due to dimensions and the effects of them in spaces and with respect to sustainable design and the priority of concrete to steel materials, the steel elements would substitute with concrete. 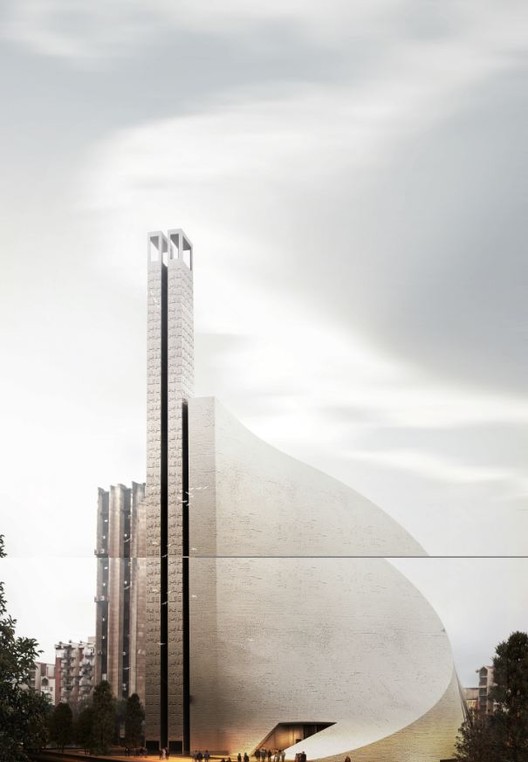