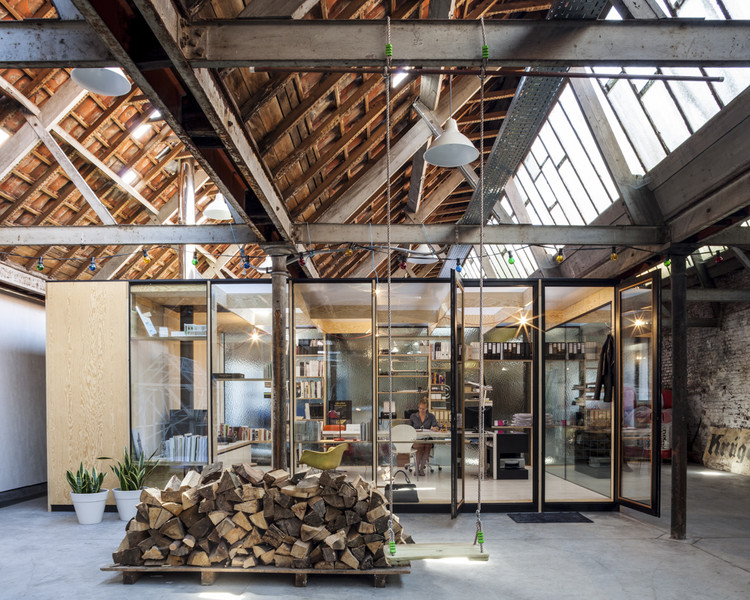 The building envelope ≠ the insulation envelope : the interspace between these two shells is ‘covered outdoor’ space.

The interspace allows/obliges inhabitants to use the space differently each season.

In summer and spring the interspace is occupied as living space (covered from rain) and in winter there’s only the ‘cocoon’ that needs to be heated.

The covered outdoor space also allows a flexible use in time which is a way of sustainable living / building.

Units can be added, removed or repositioned to create a different constellation and use of space.

The covered outdoor space allows the use of materials and building details in a way that wouldn’t be possible outdoors in all weather conditions.

In a ‘normal’ building the façade and roof must protect inside space from precipitation and at the same time insulate outdoor versus indoor. This implies a certain way of detailing the construction.

In the case of working in this covered space this is not the case, which makes construction details very interesting and unconventional.

We (my boyfriend and I) divided the factory of 800 m2 in two parts:

-  one side is where we construct our house.

-  the other side is workshop.

It is inside the workshop that we made the living units as a temporary living space meanwhile we are building our final house. The idea was to make a livable space but meanwhile not having to determinate to much and narrowing our possibilities for any future use of the workshop.

The light in the mobile units comes through the polycarbonate plates on the top. There are no windows in the walls so that when you close the door of the unit you appear to be in a cocoon. Possibly not inside the factory… (This was a psychological advantage because when you worked all day on het final house you want to relax without having to see it all the time…)

On the contrary office that I made in the workshop is definite and very open.

Possibly I will make some additions to it in the future inside the workshop when my architecture office expands.

My boyfriend and I are the inhabitants.

His specific demand for a workshop (to work on motorbikes, cars, etc. as a secondary activity) and my request for an architecture office space have been determinative in our search for a premises.

We are both very interested in (old) industrial architecture.

Our choice of constructing our final house ourselves (long term and phased project) resulted in the fact that we needed a temporary house.

At the end of 2011, my office was the first thing that we added to the building. In May 2012 we moved to the temporary house.

The roofs and exterior walls were (some still are) in really bad shape when we bought the building. The walls have a lot of ‘rising humidity’ and some were almost falling apart.

That is a reason why we chose to make living units that stand alone, loose / independently from the exterior walls and roof. This way the exterior walls become ‘garden walls’ and the newly added spaces can have the comfort/convenience of a new modern space.

This allows us to phase the execution of the whole project.

In 2010 we were able to buy the building and the lot at the value of the patch.

In the eyes of the seller/ previous owner the building did not have any value. He even didn’t want to show us the inside because he thought it wasn’t relevant. It had to be demolished anyway!

My boyfriend an I immediately fell in love with the cast iron columns and the shed roofs with their northern rooflights. The building dates from 1880 and was the oldest building that made part of a textile factory that employed about 2000 people. Nowadays a lot of beautiful other buildings of the factory are demolished.

It was already clear to us, the first time we visited the space, that we would work with the existing space and characteristics.

Witness of the rich history of the building are the many inscriptions of names and dates that we encountered on the columns, trusses and beams.

That is one of the reasons we didn’t want to sand-blast the whole interior and give it a new layer of paint.

I think the building should be livable and adapted to modern comfort standards but also show it’s true age and patina.

The contrast between the new additions and old patina is very interesting.

To construct my office space I used KERTO-beams. This is a Scandinavian product, related to plywood, that is used as an alternative for wooden beams for example in a wooden floor.

I used them in a rather unconventional way as a sequence of  inverted U-shaped frames. In between them are bookshelves of Polish deal plywood and insulating glass panes.

Seeing the KERTO’s on the head they seem really thin. Seeing them on the side, they have a certain mass. I like the different perception from a different angle.

On one side of the office space I used ‘hammered’ (ribbed) glass panes. This is a reference to the type of glass panes of the existing rooflights.  They admit light but make a visual barrier between my part of the workshop and the part of my boyfriend.

The starting point of the project, the reuse of an old building, is a form of sustainable thinking.

Leaving certain spaces open and undefined allows us to adapt the building to functional changes and future ideas.

All the wood that we used for the new additions is FSC-labeled.

I like the fact that the practical side of building had a repercussion on the form and size of things. We also did a lot of construction ourselves, which has practical consequences.

My boyfriend and I built the temporary mobile living units ourselves in two weekends.

I designed them as a very basic, simple construction (on wheels!)  that was easy and quickly to build.

I opted to design these units using the standard measurements of an OSB-fiberboard. The advantage of doing so was that we didn’t have to saw the plates and didn’t have any wood waste.

We made the walls flat on the ground and then erected them and fastened them to the wooden floor on wheels. It like making a house of playing cards.

The total size of the units is also determined by the distance of the cast iron pillars in the workshop. It fits perfectly in between them so we can relocate the units any time we want.

As in any other architecture project the construction details of my office space are the result of several consultations with the contractor and many practical considerations.

The glass panes couldn’t be much larger then the ones on the front of the office space because the contractor had to carry them inside by hand.

I try to imply the ‘big idea’ (of an intermediate space between inside and outside) in all of my projects as an architect, although I don’t always have the square meters (or surface) to do so in the way that we did here.

I’m convinced that an intermediate space between inside and outside can be a very valuable addition to a ‘traditional’ house, even in a Belgian (rainy) climate!

This is already the case with a lot of Flemish houses and their typical ‘verandas’, although I’m convinced that there can be a more valuable solution than this.

For example architects Lacaton & Vassal use this idea of intermediate space between inside and outside to create very relevant architecture that focuses on the use of a house according to the seasons.