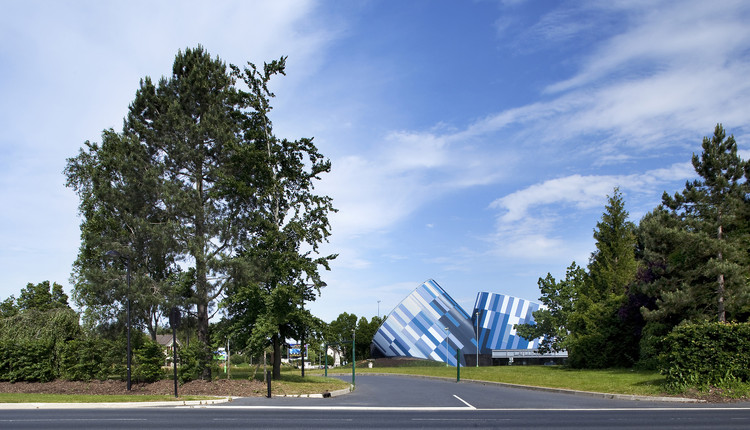 Text description provided by the architects. Situated on the edge of Alençon, in the rural landscape of Lower Normandy, La Luciole – French for «firefly» – resulted from the efforts of its passionate director-«programmateur». Founded in 1994, this concert facility has carved itself a reputation, attracting renowned musicians to its tiny performance hall.

Several years ago, the municipality has agreed to finance the extension of La Luciole. The competition brief required a larger, 650-strong concert hall that would however maintain the sense of intimacy and the enveloping quality that defined the original space. The desire to bring people maximally close to the stage has literally shaped the restructured venue wherein artists are almost surrounded by their audience.

The brainstorming phase saw the buildingʼs forms evolve from rectangular to cylindrical, yet the core idea – two tilted, interconnected volumes containing the audience and the stage – remained intact. «It's somewhat bizarre, and eccentric, and very different from everything else designed by our office,» notes Jacques Moussafir. This is partly explained by the projectʼs dynamic tempo: the competition proposal was done in ten days. More importantly, the bold geometry and exuberant color scheme reflect the strong, flamboyant personality of the man who has created La Luciole.

Structurally, the project consists of two cylindrical steel frames and a concrete enclosure for the stage (smaller concrete boxes are used for entrances and exits). An arch emerging where the two cylinders intersect marks the border between the stage and the audience. Simple in itself, the steel structure required some serious development work as the architects aimed to minimize the use of materials without compromising stability. Another challenge presented itself while mounting curved insulation panels and suspending acoustic sheets from the rounded surfaces of the performance hall.

Built by the west entrance to the city, La Luciole appears as an urban beacon, set in counterpoint to the linear façade of the adjacent exhibition centre. The membrane stretched over the auditoriumʼs circular roof is meant as a projection screen. Exterior finishing relates the building to its natural surroundings. The initial project proposed matt and polished stainless steel cladding that would reflect the ever-changing Normandy skies, yet the reality dictated a more economical solution: corrugated steel siding. Seemingly random arrangement of white and blue panels suggests a pixilated fragment of the sky, often covered with fleeing clouds. With darker shades concentrated where the two cylinders meet, the overall effect evokes a geyser linking the earth and the sky. 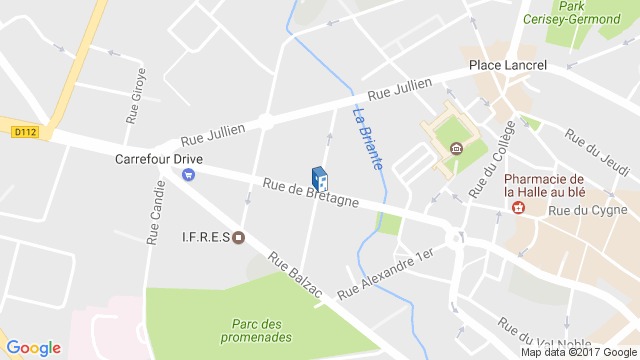