The idea behind the proposal for the Central Mosque of Pristina comes from the first religious needs and the study of the earliest styles of mosque architecture in Kosovo. Designed by Maden GROUP, the concept is to convey tradition through contemporary architecture while combining in the best mode of architecture and religious rules. Therefore, the architects developed in geometric foundations, by combining simple geometrical elements. More images and architects’ description after the break.

Square as a simple and pure form, the perfect form, because what we want to convey is the purity of the faith, for us this form reflects the religion. Even in the earliest mosques the shape of the building based on the square, on a regular form where everything is equal as well as we are equal in front of God.

Tradition is priceless element that we have to use it wisely because the purpose of the Central Mosque of Prishtina is to inherit the old and rich culture that the city was build upon and to pass it through time as a center for Islamic culture in the capital of Kosovo.

The biggest architecture value is to achieve transmitting elements from predecessor which in this case is the Grand Mosque of Pristina (Sulltan Mehmet Fatih Mosque). By analyzing the typology of this Mosque we developed the concept by using same elements to design the plan pattern. We wanted to create this transfer bridge between the past and the future. Since the Central Mosque of Pristina besides meeting the needs for praying, our initial idea was to make a city landmark which will serve as a central point of orientation.

Volume and architectural touch is the best way to express the importance of this building. We wanted to create orientation elements also in the exterior of the Mosque to be used by people either for religious needs or simple as marking certain directions. Direction of Kibla is the most important point for commencing with religious ceremonies. That is why we started to rearrange the exterior volume of our design to emphasize this strong element.

Using arabesque in our concept was one of our aims to keep the tradition as a part of other design elements of our Mosque. Flower in Islam - Flower patterns complement the symmetry common in Islamic design. Islamic art often integrates the use of symmetrical and geometric designs for decorative purposes. Mathematical concepts as they apply to artistry and design lend themselves well to producing flower motifs. We used this technique to design Mosque`s façade. By generating and combining geometry with flower patterns we reached a custom designed façade to fit with every element used in the fundamental concept of the Mosque design.

To reach the highest number for praying during Islamic holidays we designed the landscape so it can offer extra space for praying. Floor pavement is designed for orientation and also to mark the praying space for one person. Because of the weather conditions in Pristina during winter, we designed a flexible solution to shelter bigger number of people within the perimeter of the Mosque. By using folding panels, in front of the entrance we can create this space.

Also we can transform the interior of the main praying hall into smaller spaces in the time when the Mosque is not full so we can be more energy efficient. This flexibility is done by respecting the rule for not mixing men and women in the process of praying.

As we mentioned above, we wanted to preserve the tradition not only in terms of architecture elements but also in the terms of functionality. It is known fact that early age cities were characterized with the city center, the Mosque and the bazaar. Everything is connected; accessing the complex you can either go to the Mosque or use the underground levels for shopping and other functions. We used small stairs and ramps so the access is maximized for everybody. Using the typology of small stores we created this web of functions.

Sustainability of the mosque building should be determined on some required achievements mentioned below: Sustainability from design - Rationalizations of mosque building shape indicate the sustainability. General provisions, adequate orientation, and placement of openings in that way which maximize the usage of natural reassures like are: sunlight, insulation, ventilation and air conditioning. These are some direct accesses to increase the values of the building in sustainability context.

Alternative Energy solutions - Regarding to alternative energy solutions which are required in this kind of contemporary building, in this case, it is proposed to use the geothermal energy. To realize this idea, first of all, it's needed to do the A-testes for the abilities of land on that area. Also, to heat the inner space of the mosque during the winter days, it is proposed to use the heating from the city central heating network, which is near this location. The city central heating network is going to work in ecological way and with time generation, using the steam of Kosova B thermo central which produces electrical energy.

Recycling - The water of rainfalls is going to be collected or accumulated, filtered and then is going to use for daily ablution. Ventilation - Ventilation of space in mosque is thought to be in natural way, where the air flow is realized from openings in façade walls. Light - The light fittings of front yard are going to be with their own solar panels that use the solar energy to produce light. 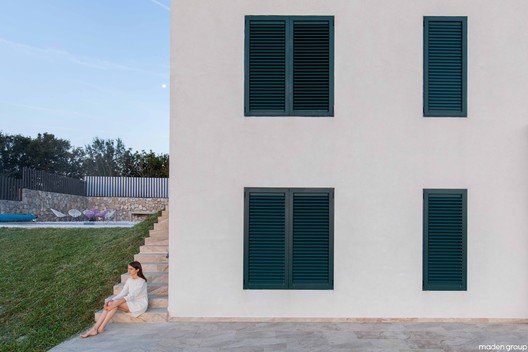