Designed by Appareil, their proposal for Naves, a temporary pavilion for the city of Mons, Capital of Culture in 2015, addresses a contextual relationship to the gothic surroundings as an exploration on lightness and transparency. Inspired by this historical context, this project explores structural and material logics to revisit the gothic arch; the ‘curve’ is examined as a bending element caught within a woven collaborative structure of glass fiber tubes, in which the use of compression is exchanged by the one of tension for the building to achieve maximum lightness. More images and architects' description after the break.

The benefit of the technological system lies in the optimization of materials and the minimal footprint that the building possesses. Combined with recyclable materials such as a wooden deck and partitions, as well as a temporary etfe skin, most of the construction elements are entirely reusable.

Echoing the nave - the spatial organization of the gothic church - the distribution of the pavilion is driven by the linear directions dictated by the pre-stressed assembly of rods, unfolding the program along a central circulation axis providing the access to the cultural spaces. The naves are defined by differentiated sections and rods density, modulating the inner volumes into vanishing extremities to propose a suave transition between the building and the vegetation of the park. The central space, placed at the junction between artifact and nature, unveils itself as a performance space.

A stage on the park, Naves is cultural universe that is exposed to the very spectacle of life, an introverted apse exposed to the serene manifestation of Nature. 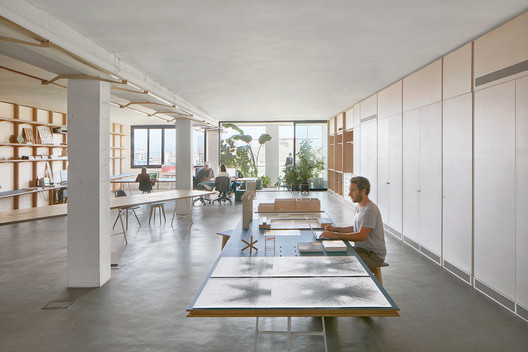