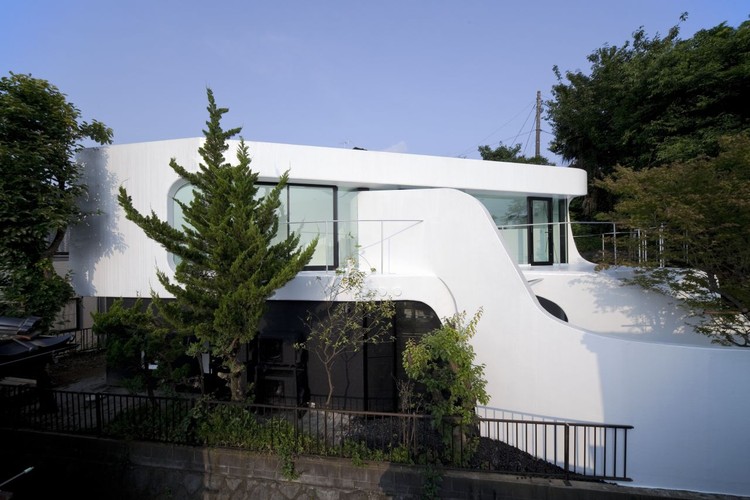 Text description provided by the architects. Imagine a site you might picture, when letting your mind wonder back in time: damp soil forms a soft ground, catching your footsteps, ancient, weather-beaten stairs, that have been used in earlier times as an earthen path, a lovely old retaining wall and carefully cherished plants. When we first set foot on this old soil in the city of Myoren-ji, we not merely got interested by this lush site, but rather fascinated by its' overwhelming beauty, that laid in every single FIBRE.

Such a feeling should never be seen as something disturbing, when it comes to architecture, moreover should it be as such occupied by the grounds' fascination. To put it in other words: to build an architecture does not merelz mean to "put something on the ground", but rather to come closer to the grounds' scrupulous dealing.

If you let your finger run across the complete surface of Celluloid Jam, no matter where you would start, you could a) go in one round from exterior to interior and back to your starting point without taking a break. b) touch every point on the exterior as well as on the interior and returning back to your starting point without lifting your finger once.

On one hand there is the surface, which results as a flow of the architecture from outer wall to roof to flooring to interior wall to ceiling and can therefore be seen as a seamless structure. While on the other hand the shape itself is being created by cutting, opening and bending the so called Moebius strip (which is formed topologically by twisting and turning a belt in shape of the number 8).

You could feel the longing for the ground to become one with the architecture. So in order to create this connection of exterior rendering, plants, rooms, retaining wall, terrace, ancient stairs, patio and balcony with geometric help, the two components (architecture and nature) have been slowly combined to one united mass by applying adhesion.

To underline this impression, Celluloid Jams complete surface has been realized without visible junctures. The wooden construction is revetted by fibre restrained plastic to create one unique surface of both interior and exterior and furthermore to form one flowing shell, in which the punctual static loads are being reduced, while the static loads can be evenly spread. So the architectural shell approaches its inspiring natural example: the egg shell.

On top of the soil, where the Moebius strip touches the ground, the border between nature and the architecture dissolves into nothing, just like melting plastic. This separation is merely seen and projected by the eye.