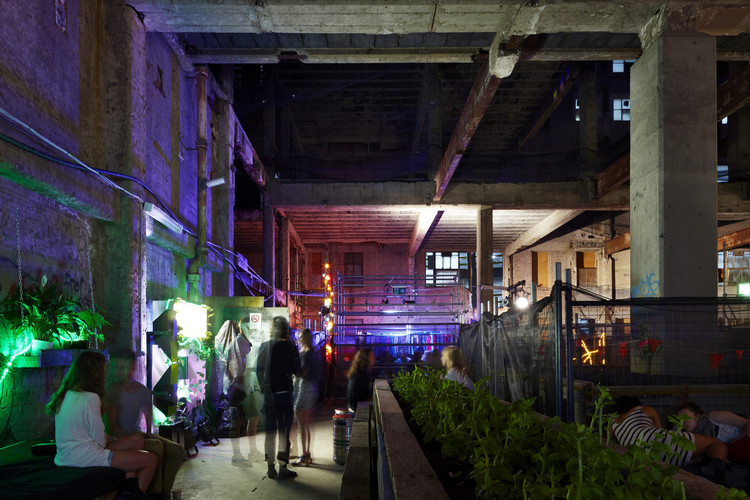 Text description provided by the architects. Where?House was the Hub of Melbourne Music Week 2012, a 10 day pop-up event space held in the Argus building. The iconic yet dilapidated building on the corner of Elizabeth and La Trobe Streets was transformed into a series of spaces hosting live and electronic music, seminars and workshops, a dining hall and bars, vintage clothing, film screenings, projections and art installations.

The existing building, in its crumbling state, compelled each outcome of insertion. Each installation was governed by the constraints of the existing conditions. Balancing the integrity of the event space and safely hosting 1200 persons at any one time was challenging. Upon initial access to the site it became immediately evident that circulation was going to be one of the first most difficult issues to tackle with jumps in slab levels, unfinished floor surfaces, the requirement for stairs and no covered roof. The production team entered a decaying space and slowly began injecting new life forms.

At the event launch the building was breathing again; filled with music, art, food, light and people.

The intention to evoke the warehouse party culture of the early 90’s meant the fitout was kept to a minimal and raw industrial look. Scaffolding was a reoccurring material that was used unconventionally to create picnic table furniture and service fronts for the food vendors and main bar.

The cave-like main dance floor area came to life with projection mapping that changed daily. As the only ticketed area (apart from ticketed events in the Learning Curve), the main stage was approached by unassuming visitors.

Entering from La Trobe Street, the main stage was discovered after walking through a wide screened corridor flanked by fencing and a light installation. Turning at the corridor’s corner and following the sounds of reverberating music the full impact of the warehouse space was revealed.

The first floor dining hall, bar and lounge areas were open and free to the public from 11am-11pm each day. The two temporary gantry style stairs were carefully designed to negotiate access in the existing slab void between deep steel beams and formed a pocket of space at ground level as a meeting area and designated smoking area. The stairs were inserted in the cavity void allowing people to experience the view around the two open levels and up through the giant empty space towards the sky.

The market-style first floor also hosted the SONOS sound garden which was filled with plants, lounges and a herb garden. People gathered to eat and drink around the garden spaces whilst listening to live DJ’s and browsing the vintage market.

The Learning Curve workshop space was designed based on the logo curves of event partner Intel. The room was constructed out of 3.6m high natural plywood walls which created a creative learning space nestled in the back corner of the first floor. Music seminars, presentations and workshops were hosted within the Learning Curve which was located adjacent to the free Wifi lounge.

Where?House gave Melbournians a once in a lifetime experience to wander through the mysterious Argus Building. 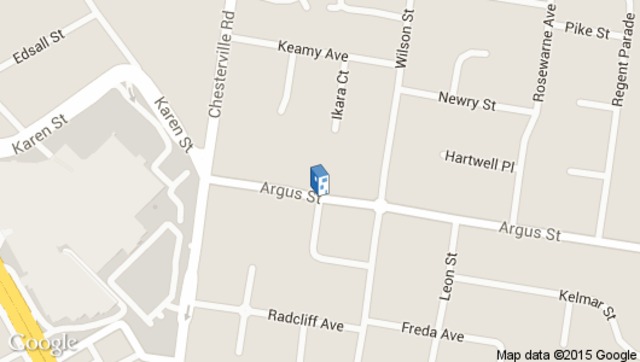 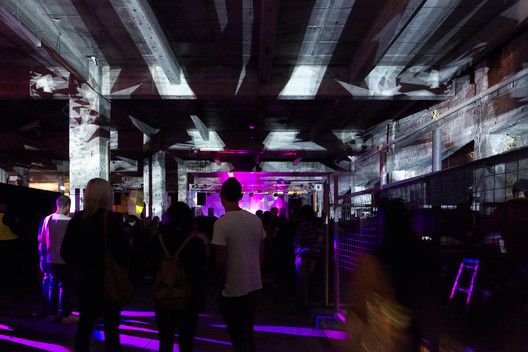