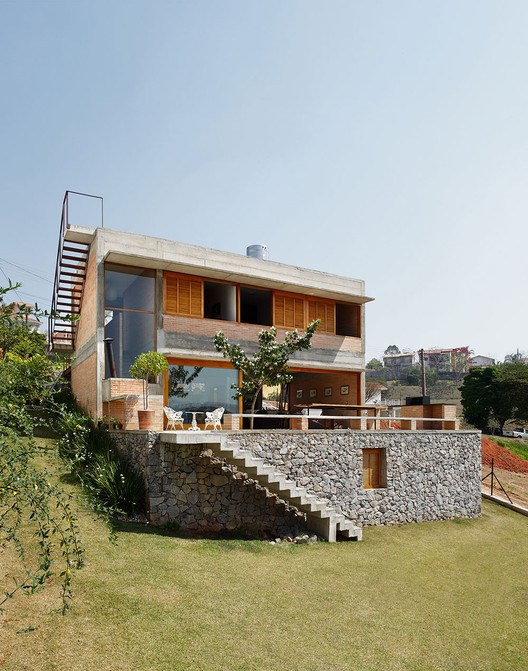 “When man looks at nature now, he sees it as part of his project, the transformations that will be made.” (Paulo Mendes da Rocha)

This house was designed as a home for my parents, it is located in one of the many subdivisions in Bragança Paulista city, 90 km from the city of São Paulo.

The project begins with the choice of the site, found in an advertisement online. In it, a photograph showed a declining lot in the foreground and a lake surrounded by beautiful palm trees in the background. This image guided the development of the project.

The first operation was performed to construct declining plateaus, through a process of cut and fill. The first plateau, named by the wide access, is open to the street and serves as a parking lot, and the second, one floor below, can accommodate the volume of the house. The volume consist of two blocks side by side, one facing the street and the other towards the landscape. The first volume houses the bathrooms on the access level, kitchen, and laundry on the ground floor, and the second houses bedrooms and living rooms. This layout could ensure the same views, as well as the same lighting and natural ventilation qualities, both in the halls and in the bedrooms.

The 165 square meters building comprises a conventional program organized in two levels. In the access level are the bedrooms and bathrooms. On the floor below, rooms with a fireplace, bathroom, kitchen, laundry and a terrace which is an extension of the living room, and finally, under the terrace, another bedroom and bathroom. The terrace slab, resting on the stone walls, contains barbecue, pizza oven, a bench and a tree.

The house has two entrances, one through a long metallic bridge that connects to the bedroom level, and another through a staircase that links the street in the lower plateau. An internal staircase, connected to the access bridge, connects the two levels and the access to the extra bedroom, as does the terrain itself and an external reinforced concrete staircase.

The structure consists of reinforced concrete columns and beams in the periphery, cast in place. The pre-conventional slabs are supported by the edge beams. The bridge and external staircase that connect to the garden terrace, are made with a metal frame and rails. Retaining walls were built of stone, wooden frames and solid clay brick walls. 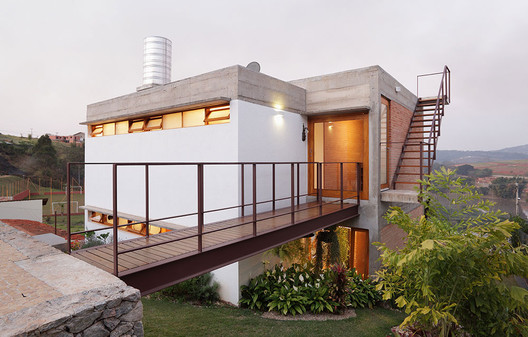