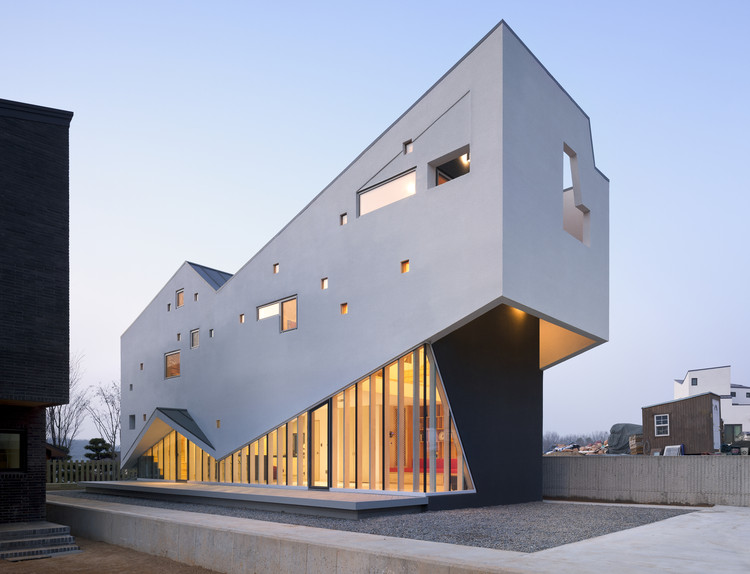 Text description provided by the architects. These are the questions that Korean architect Hoon Moon typically throws out: ‘Why so serious? Why not laugh more?’ Moon-Hoon’s works are home to a wide array of faces. Panorama House appears to be an accordion, and Rock It Suda looks like spermatozoa. He shows a mysterious spacecraft (ongdalsam) and a Gothic castle (Sangsang Museum). Some may burst out laughing at the Darth Vader image overlying Play House. However we have to keep in mind that this reaction is what the architect fully expects. We begin to wonder, then, what causes the laughter. Is the source of this laughter satire? The answer is yes; the source of merriment in Moon-Hoon’s work is satire. Now, let me ask another question: Is it possible to satirize political and social issues through architecture? Because the various facets of his works do not seem relevant to contemporary political and social issues.

However, are his works really irrelevant to current political and social issues? Let us go back to the first questions I raised. Moon-Hoon derides Korean architecture as Malddugi (of the ruled class) and sneers at Yangban (the ruling class) in Bongsan Talchum, a traditional Korean mask dance. Korean architecture could exist as a cross section of Korean society, as the Yangban class has revealed contradictions in the social culture of that time. A satire should expose social contradictions in a direct or in direct way. It is necessary to show a conflict between the Yangban and Maddugi. However, with regards to social and political aspects, Moon-Hoon reminds very personal. He evokes Korean architecture’s stagnancy at a very personal level. His architecture relies on his own taste, personal experiences, and assumptions.

It is true that some people burst out laughing at his work because of this personal approach; however, we have to remember that partiality comes from a very personal stance. There is no partiality without an individual ‘I.’ Our society usually forgets this point, and there has been no place for ‘I’ in Korean architecture. Until now, Korean architecture has been led by insubstantial abstract apparitions, such as modernism, de-constructivism, and minimalism, not by an individual. The reason that I consider these architectural trends as apparitions is that they are not relevant to ‘I’ at all. Every point of view is established based only upon a subjective individual, ‘I’, which is formed by external conditions such as land, climate, culture, customs, biological nature, and as on. Subjectivity and objectivity consist in the individual. Objectivity refers to the stats of objects rearranged by the individual’s logic as subjectivity that is embodied in these objects. Objectivity never means a status as it is. Until now, there has been an almost complete lack of awareness of individual. This means that there has been no ground for subjectivity or objectivity. This point corresponds to the question that Moon-Hoon threw out earlier regarding Korean architecture. He suggests starting off with a clean slate, forgetting modernism or tradition. He invites us to tell our own stories starting from ‘I.’ Through his ambitious attempt, I read Moon-Hoon’s architecture. Inchworm House, an epithet that I applied to Visang House, appears to be measuring something. One end touches the ground, and the other end stands straight into the sky. It was easy to find Moon-Hoon’s architecture in Angol, where a site was under a process of development and prepared for housing. I found two structures that seemed like his work. One seemed to wear a mask that you would only see in special effects cinematography, and the other one was Inchworm House. While making a phone call standing halfway between these two houses, I glimpsed a slight movement in Inchworm house. Afterwards, I discovered that both houses were Moon-Hoon’s works. The bent, V-shaped part of the house that looked like the curve of an inchworm at first glance appears somewhat contrived as it seems to be superficially forced to make up its own facade. However, the function of this house is closely connected to the features of the façade itself. The narrative of Inchworm House starts with the southern part of the long living room that looks like the end of inchworm. The facial impression of the house extends to the living room, giving us the feeling that we are in the inchworm’s stomach. The windows arranged in a form of a turned V on the façade of the living room seem to move, as if intended, as the light changes. The eastern wall appears to be an inchworm’s head, lifted straight up as if measure something. This wall is erected up to the second floor. These images are all reflective of an inchworm and those national images associated with it. Walking up the stair from the living room to the second floor, the allusions made to an inchworms are replaced by an elevated spatial perception and height. At the half landing on the stairs sits an ambiguous space, which is currently used as a dressing room, but was actually designed to be a future nursery. The stairs lead to an attic room above this space. If you go up to attic, you will see a corridor that stretches to the eastern wall of the living room, which goes up to the second floor. This corridor leads to the bedroom. There is another passage leading to this space. It leads from the baby’s room to the bedroom though the bathroom. The path serves as a bathroom. In other words, there are two entrances to the bedroom, though a corridor corresponding to the eastern wall of the living room and through a passage that starts from the baby’s room and passes through the bathroom. If you come out from the bedroom, you will see a small interior terrace and a high wall at the opposite. You will notice, at a glance, that the inside of the eastern wall servers as a screen. It is well within comprehension that this terrace is like the royal box of Margravial Opera House in Bayreuth. You can go up to the attic from this terrace as well. Moon-Hoon placed an Oriental painting on this terrace, which can be seen through the window frame. This house has an individual story, which makes it like a personal opera house for the couple. The space that seems to rise continuously like sound reverberations, forming a connection between the rooms and the attic is its face.

Inchworm house has the power to expose the faces and spaces of the building, creating a story in the erasure of faces in the spaces, and making us aware of the connection between them. This house is full of small but varied spaces. Moon-Hoon present a new way of creating space that Korean architecture has missed or has not yet experienced, and he demands that we read spaces in an altogether new way. To wish that this experiment extends to the exterior space is to support him, not to express a lament for something missing. On my way out of the front door, I saw a structure engraved with the shape of a human body which reminded me of a Procrustean bed. It evoked mirth, and I felt transported, as if my head had been cut clean off. 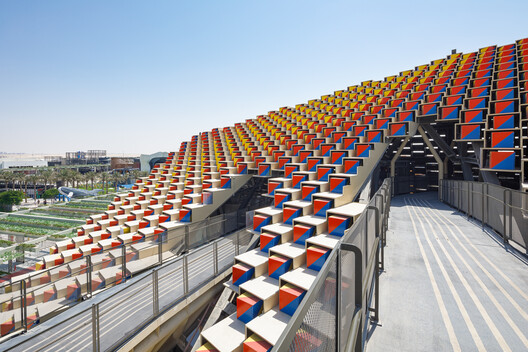