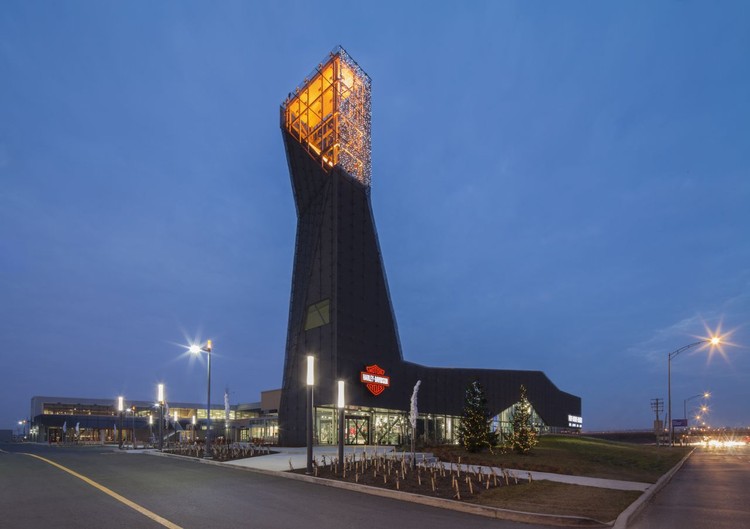 Text description provided by the architects. The Prémont Harley-Davidson is located in Québec. The complex measures nearly 8000 square metres and houses a large showroom, a museum that includes several collectors’ items, and a large repair shop. The program also includes a theme restaurant and administrative offices. The architectural part consisted of creating an iconic building, a landmark in the countryside. On the southern end of the site, the building culminates in a truncated tower, the upper part of which disappears in order to make room for the Prémont lantern which can now be seen at night like a lighthouse—a landmark visible from the highway and surrounding areas.

The building is located where La Capitale expressway crosses Pierre-Bertrand Boulevard, in an environment marked by the type of generic architecture found in city outskirts. Access to the sector was designed with cars in mind, and buildings are laid out on rigid, regular, anonymous plots of land. Many of the buildings dotting the countryside were built with small budgets. Their design is banal and minimal, with no thought for the place in which they were built. This accumulation of metal boxes creates a repetitive landscape that meets an immediate need but has no long-term vision. In this context, the Prémont Harley-Davidson building achieves distinction by having its own identity and a design appropriate to the site and its characteristics.

The building’s shape is simple, but dynamic. It is inspired by the Harley-Davidson brand and has an elegant, fluid image that also projects freedom and independence expressed by a desire to place itself beyond conventions. The architecture gives shape to this spirit.

Although most of the buildings in this sector sit solidly on their lots, the Prémont Harley-Davidson building opens out in a band that turns back on itself in a “U” shape; thereby turning its back to the highway to create a protected yard on the other side. This space, a sort of microclimate, gives the building’s surroundings a more human scale and provides protection from noise, wind, and pollution. On the side nearest the boulevard, a large green band runs the long of the building and contrasts with the surrounding paved surfaces. The parking area is towards the back and parallel with the building. This allows the showroom to be in front on the boulevard.

Depending on the time of day, one of the building’s highlights is its double skin of black aluminum that acts like a theatrical veil, creating a cut-out on the main building by day and shining by its absence at night. From the highway, the grill lends movement to the façade thanks to the moiré effect when cars travel quickly by it. The layers that make up the envelope give the effect of depth, opaqueness, and light to pedestrians walking by. The metal skin is made in such a way that it gradually reveals the interior. During the day, the metal grill gives the impression of opaqueness and creates a play of shadows. This material brings to mind the metal used in the neighbouring industrial buildings. At night, the skin filters the light that comes from inside and transforms the building into an immense lantern. Perforated with large openings, the veil allows light to be filtered inside and creates a play of varying shadows.

The approach is intriguing and inviting. When you arrive on a motorcycle, on Pierre-Bertrand Boulevard, the envelope frames a two-story high opening. Like a poster, this window displays a few motorcycles and gives a foretaste of the visit. The skin runs along this façade, rising and falling to let the interior be seen, then culminates in a tower above the entrance.

The inside of the building is designed more like a museum walkway than a simple store. The interior layout is designed to create an experience for visitors. They are drawn through the space following a sequence that tells the history of the Harley-Davidson company. The main entrance is located under the tower and marks the entrance to the world of Harley-Davidson. Once in the hall, visitors are submerged in the light that comes from the tower. They can also see the structure that supports it. From this spot, a play of openings and light dot the course, highlight the objects on display, and direct visitors through the various spaces.

More than a signal building, Prémont Harley-Davidson captures the spirit of the legendary motorcycle brand and gives it shape, while creating a unique architectural response in this generic environment. 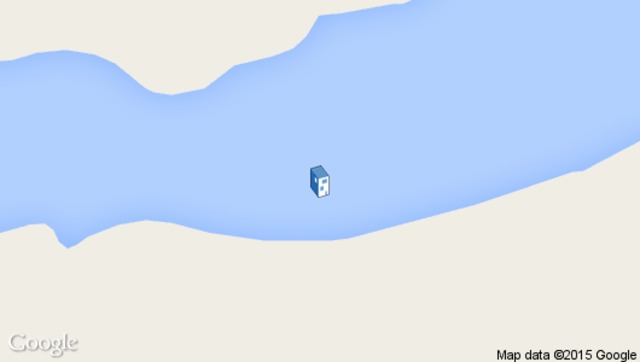