Designed by da architecture, their first prize winning proposal in the IBA Basel 2020 competition, Das Band meiner Stadt (The band of my city), is a new dynamic that is brought to the Eastern railway station district of Quartier du Lys, which becomes the new landmark of the city of Saint-Louis. The development of this new district on the western side of the station area is characterized by a well-mixed, multi-use business district with offices, commercial and residential programs. This will benefit Saint-Louis train station and help the stream of travellers to further increase. More images and architects‘ description after the break.

The area of the railway station of Saint-Louis is located near the River Rhine at the German / Swiss / French border about three kilometers away from Basel. The Gare Saint-Louis has become one of the main intersections of mobility for the tri-national agglomeration of Basel on the French side. Due to its proximity to the Europort airport and Basel-downtown,the station of Saint-Louis has become an important junction point and its role is expected to further expand in the coming years.

A band unfolds at the station forum to embrace all the different functions. The first function is to accommodate the existing parking spaces. On the one side the parking spaces are located under an elevated fold of the band and on the other side parking is placed on the band itself.

The elevated tongue of the band is not just a roof for the parking spaces below. Instead, the tongue is also the terraced surface of a meeting point for the inhabitants of the Quartier de la Gare as well as a waiting area for train passengers in good weather. It is also a place for events, such as an open-air stage for flexible film screenings.Opposite the terraced area, the band folds into a roof for the bus and tram stations right at the entrance of the train station. A piece of public art in the center of the square will complete the new forum.To further urbanize the forum, the ticket and information store, as well as a small café, are located next to the forum within the station.

At the street corner Rue Jean-Jacques Henner and Rue de Mulhouse, on the existing single-storey building a cultural center will be built. This will be accessible by a large outside staircase. The Cultural Center offers space for a community center of the Quartier de la Gare, a kindergarten and outer surfaces to play, as well as greenhouses for urban gardening. The theme of urban gardening is continued on the roofs of existing residential buildings. These are places that will strengthen the community and promote social interaction.

The two large courtyards, which are sheltered by the existing residential buildings, invite you to linger. They are divided into different areas by a polygonal hill. Some have kids-areas to play and tumble, others are quiet to allow to rest. The parking garages that have an inclined surface can be used as lawn for sunbathing in summer and for sledging in winter. Additional fields can be used for games like Boccia.

On one side the parking spaces are placed under the band and on the other side they are positioned above the band.The parking places of surrounding residential buildings will be re-organizable as courtyards that invite you to linger and serve not only as an area for parking . This is created by the two half-buried parking garages, which rise out of the landscape.In addition, on the west side of the station, two parking garages for the P&R traffic arise with 600 parking spaces. These can be jointly used by the residents of the Eastern quarters.

The facades get a new dress, in playing with the existing window apertures. They get in some areas a cladding of EIFS in different shades of white and gray-tones. In other areas, the building envelopes are encased with fiber cement panels and wood slats. Through the different use of materials and colors the Quartier de la Gare will get a liveliness, it will begin to live.

The new cladding of the façade is designed to improve the energy balance of the building. This will also improve the quality of life for residents. 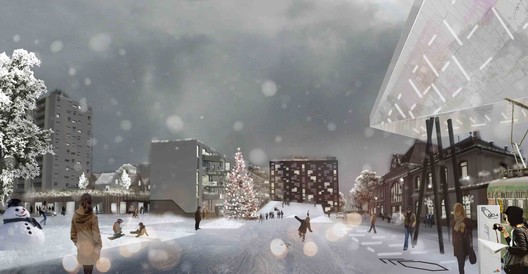