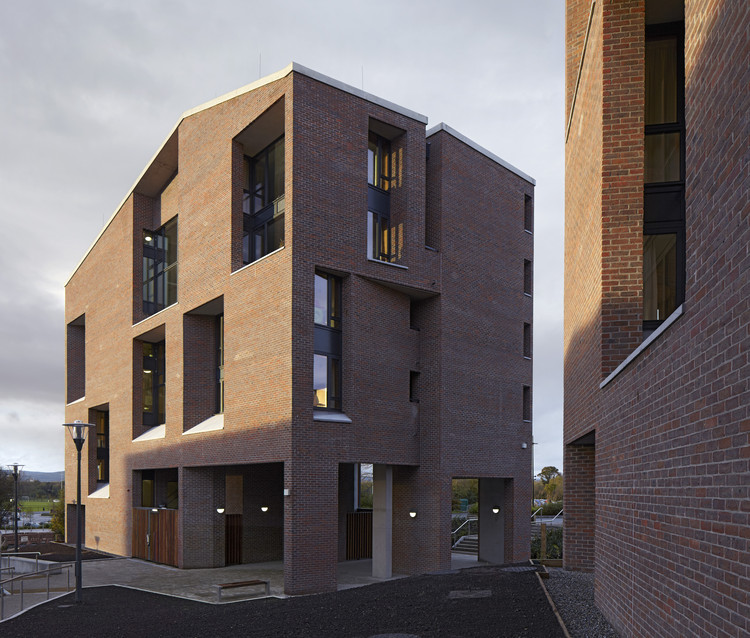 Text description provided by the architects. The University of Limerick, in the South West of Ireland occupies a large territory, formerly a Demesne, and is situated on both sides of the lower reaches of the river Shannon, the longest and largest river in Ireland. Part of its most recent expansion to the north of this great river, accessible by pedestrian bridge from the existing campus, provides for the construction of a new medical school building and accommodation buildings for students attending the facility. These new buildings are also intended to address a large public open space which will ultimately become the focal point for this expansion of the campus to the North.

The aspiration is to combine faculty buildings and residences in a manner which encourages overlap and contributes to the life of the public spaces at the University.

Aspects of the formal character are derived from an interpretation of the campus master plan which requires an organic approach to the making of public spaces on the north side of the river Shannon.  Here the ground is sloping and remnants of the agrarian landscape pattern are still evident in the form of old field patterns and hedgerows.

This new suite of buildings combines with three existing, neighbouring institutions, the Sports Pavillion, the Irish World Academy of Music and Dance and the Health Sciences Building, in order to make a new public space.

The new buildings consist of a medical school, three blocks of student housing and a canopy / pergola forming a bus and bicycle shelter.

The Medical School, the last in a series of set pieces, acts as an anchor around which the other buildings now loosely rotate. The language of the medical school is that of an educational institution while the student residences appear like three large houses. The concrete bus shelter, together with the residences combine with the medical school to form a loose edge to the public space. The bus shelter canopy, steps and ramps negotiate the level change to the sports pavilion beyond.

The central space slopes gently to the west. Three oak trees, stone seats and steps occupy a central level platform subtly providing a focal point before the space moves out, fracturing at the edges to connect to the residences, car parking and other faculty buildings. The surfaces of the public space move from hard to soft, south sloping grassed spaces, designed with and without furniture to provide for leisure and lingering.

The buildings stand guard facing the public space, distinguished by their material.

Limestone is used to represent the 'formal' central medical school, making reference to the limestone territory of County Clare in which this side of the campus is located. The stone wall is folded, profiled and layered in response to orientation, sun , wind, rain and public activity. A colonnade to the south and west corner acts as a gathering and entrance space. In contrast the north and east walls are more mute.

In response to the deep plan, the roof-form is modulated to light multiple spaces, including the central circulation space, the clinical skills labs, the corridors, and a small roof terrace.

An open central stair connecting all of the primary spaces, threads through all levels of the interior, designed as a social space with enough room to stop and chat or lean on a balustrade / shelf and view the activity of the entrance and other spaces above and below.

Brick follows through to the residences from the existing accommodation buildings behind. Here the material is given depth and the facades deeply carved providing a form of threshold between the domestic interior and the public space that they overlook. All living spaces address the public space to the south east with the more private study bedrooms facing north east or north west.

The undercroft of the residences is carved away providing archways allowing pedestrian movement from the carpark and bus park to the north as well as forming sheltered social spaces for students. Large gateways open into the entrance courts of the housing blocks where stairs, lift, bicycles bins and common laundry facilities are. 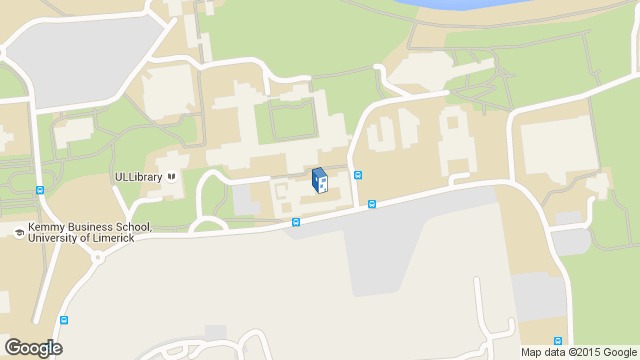 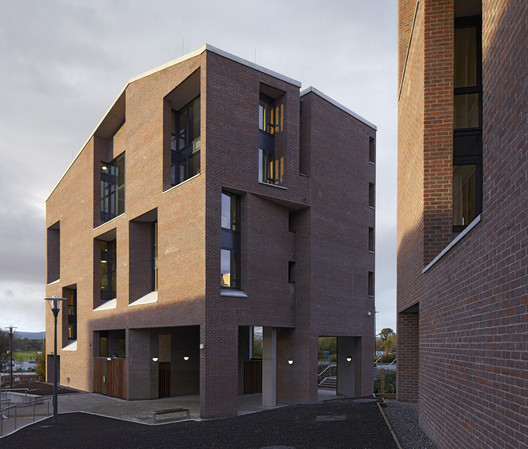