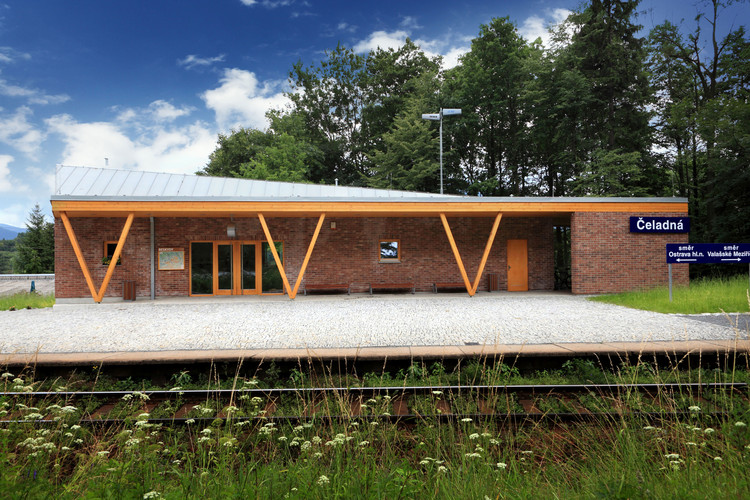 Text description provided by the architects. At the time when Anton Dachler, an architect of the Emperor Ferdinand North Railway construction office in Vienna, created his typified designs of railway dispatch buildings for towns lying on the Moravian-Silesian line some time at the end of the 19th century, he could not have anticipated, that the building of the train station at Čeladná will have to be demolished. The demolition took place in 2010 as a result of the bad technical state of the building and inadequate elevation ratios brought about by gradual changes to the vertical alignment of the track and the platform.

As a result, we were given the opportunity to take on the challenge of designing a new building. The challenge was all the more interesting knowing that the will to assert traditional processes, traditional materials and the will to evoke a traditional atmosphere could be felt radiating from every pore.

At the same time, we were aware that the new building needs to be youthful, invigorating. Like the fresh fruit of an aged tree – a child in the arms of its mother.

Accordingly, we designed a building made of brick, wood and stone. A building with a classical saddle-shaped gable facing the street, but with a peculiarly shaped roof and lively playful windows. Notwithstanding the above, the overall expression of the building, like the design of the interior layout, remains modest. Slightly emphasized is only the traditional sheltered platform located outside the building with a connecting area for storing bicycles.

The train station Čeladná is located approximately 750 m north from the centre of the town and is accessible by means of a public road. The actual position of the new train station building has not significantly changed compared to the position of the former building. Also, the communications connecting to the access paths to the building remain conceptually identical. On the other hand, however, it was necessary for the new building to reflect the already approved railway line reconstruction study, which will involve modifications not only to the running of the railway and platform from a horizontal projection aspect, but also modifications to their level of elevation. As a result, the new building no longer runs parallel to the existing railway line and the elevation positioning of the building honours the planned profile grade of the platform, so that the building will retain its barrier-free access in the future.

One of the first contexts that showed to be in a significant way decisive in relation to our design of the train station building, was the environment of the Beskydy mountains with their natural rawness, spruce trees, natural stone and the like. For this very reason, one of our first design concepts moulded the building of the train station into a shingle covered wooden block to be built with master craftsmanship. At the time, we were attracted by the idea that the final building would have a very unique appearance amongst the other stations on the line, but at the same time, would be all the more traditional in its concept. Nevertheless, in the end, it was the tendency to pursue the continuity of the whole line of the Emperor Ferdinand North Railway which prevailed. The line still remains today to be fringed by railway dispatch buildings and train stations build according to the typified plans created by the architect Anton Dachler in a uniform style predominantly of course brick. Accordingly, our train station represents just another bead on this railway line string.

These considerations have lead us to our selection of basic natural materials – wood, brick and stone. In creating the three-dimensional design of the building, we intentionally built on a simple ground plan shape. From this grew a compact mass cased in facing brickwork, accented by a classical gable and a roof shape with planes slanting off at three different angles which gradually merge into the straight roof of the bike shelter and the sheltered passenger waiting area located outside. The roof is carried by wooden pylons assembled in the shape of the letter „V“. The finishing touches of the unified area if the train station are formed by low walls, stairs and sealed surfaces made of tiling of irregularly cut stone. The tiling continues from the outside into the interior areas of the waiting room inside the building.

The new train station has been designed as a single storey building with no basement. The interior layout includes a waiting room with connecting passenger facilities, a cash desk and staff facilities, a storage room and a technical room with railway communication technology. Apart from the interior spaces, the construction solution of the building also includes an outside sheltered area for passengers and an area for the storage of bicycles. 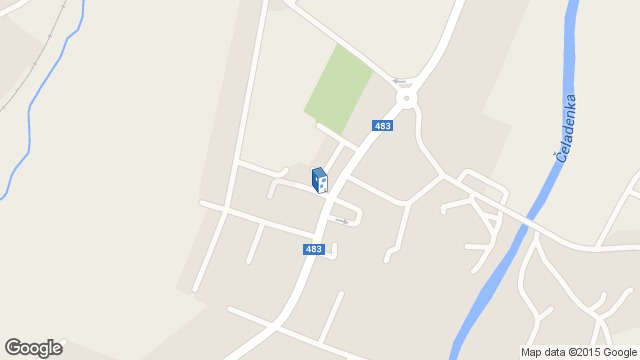 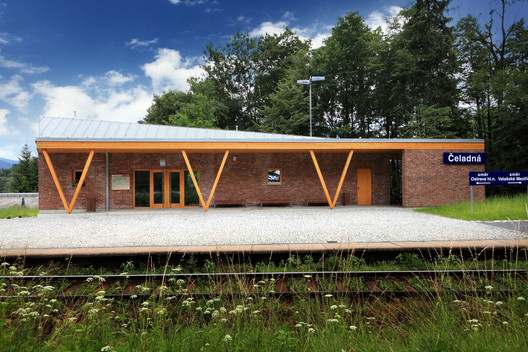