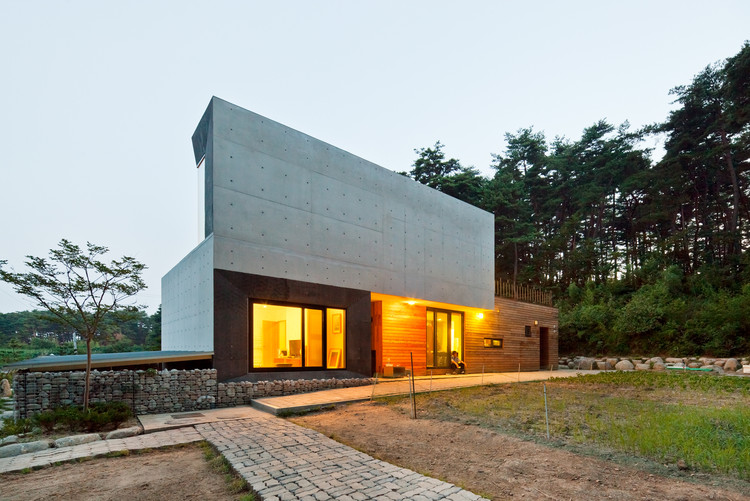 Text description provided by the architects. This small private residence situated in a rural agricultural village of Gangneung. The slightly elevated site on the start of a hill enjoys an almost panoramic view of the surrounding which is dominated by local mountainscape. Started by investigating a way in which Korean traditional villas forming intimate relationships to the external spaces from each room, the design of this house tries to emulate this relationship between interior and exterior throughout the building. In traditional Korean villas, the organisation of the building uses linear volumes to maximise the contact with external spaces. In this house linear volumes are used to create simple two storey building, two bands of volumes forming a knot, and throughout the house multiple frames of views of outside to different directions are introduced and access to the exterior spaces are provided from every room. The two rings of volumes which is sharing the circulation space of the house functionally separates the private living spaces to the more public area within the house. The exterior of these two bands are distinguished by different materiality as well. Also this ring of volumes creates outside spaces that are interwoven into the building forming terraces, courtyard and gardens.

In this house, double loops are introduced as a device for carrying the property of either ‘typical’ or ‘a-typical living’ that is categorized according to its domestic use. The one relates to more private functions such as bedroom, kitchen, bathroom etc. whereas the other does to more semi-private uses like guestroom, gallery, tea room and so on. By means of combining them without diminishing their own characteristics, the dynamic relationship between them has been established for constructing totality of living. In the design process, the interaction between them produces a certain indeterminacy which triggers spontaneous use of space.

As an actualization process, loops are unfolded to the bands corresponding to spatiotemporal sequence of activities. They are utilized for coding information as a medium to absorb programmatic requirements, according to which each activity in the band were translated into width, depth and height of space. Eventually, the coded bands are folded back to loops, which are interlinked to be a totality of living. 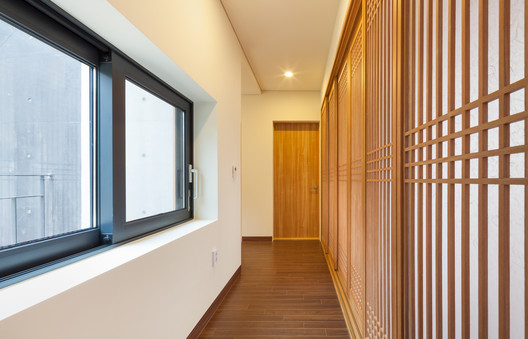