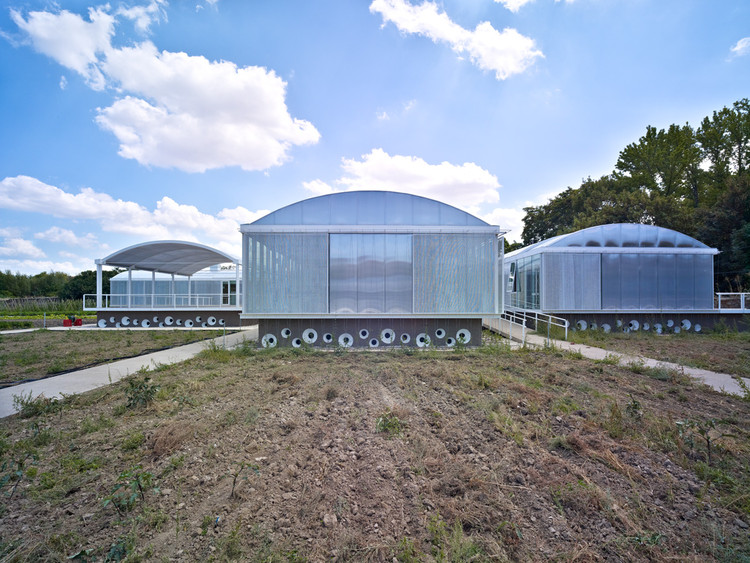 Text description provided by the architects. The agricultural foundation Fundagro is an institution for the promotion of organic farming and the recuperation of biodiversity in local garden vegetable seeds. The foundation is located in Aranzadi Park, which is a recovered meander of the Arga River, on the high course of the Ebro River basin as it passes through Pamplona. This meander was strongly affected by human activity during the twentieth century, during which sports, religious and social facilities, building lots with private dwellings, and land movements to contain the river, had transformed its morphology and landscape away from a natural meander. The process of transformation to recover the meander from the effects of human activity is a project whose main issue is the negotiation between two value categories, the socio-cultural values linked to organic gardening, and natural-fluvial values linked to every meander.

Aranzadi Park is located to the north of the old town of Pamplona, at the foot of a magnificent wall built between the sixteenth and eighteenth centuries. With the growth of the city beyond the walled town, on the opposite side of the Arga River with the expansions of Chantrea and Rochapea, the meander is surrounded by the city and subjected to great urban pressure.

In the cultural and social context of Pamplona, the Aranzadi public park intends to maintain the character of an agricultural landscape reconciled with hydraulic functionality. As a consequence, the building for the foundation inserted in this landscape is proposed as a single story, materialized as a green house. In this eagerness for integration, we use a material palette of polycarbonate, glass, greenhouse shade cloth, a light structure and vines.

Three long, separated naves, articulated through a vestibule, give shape to a building placed on a concrete plinth. The building is elevated a meter above the ground, to provide some protection from floods. It lies between old stone walls that are manipulated for hydraulic, architectural and scenic reasons. The program is comprised by classrooms, a restoration space associated to the garden produce, an exhibition space and some offices.

A geothermal system allows for a temperature interchange with the river water. The roof captures sunlight during the winter to heat up the air, or opens up during the summer to provide natural ventilation. Like the nearby greenhouses, both systems seek the maximum energetic self-sufficiency.

Within the same idea, some existing construction is reused, like the Gurbindo House, which is transformed into an exhibition space after emptying its interior from flooring and partition walls.

The old domestic, small scale space of the Gurbindo House is replaced by diaphanous spaces organized around a steel shaft that supports the existing pyramidal skylight at the highest point of the roof. The shaft, along with the walls, becomes the new supporting structure of the house.

A large wooden element occupies the entire width and height of the main facade. It maintains the relationship with existing balconies through short flights of stairs, that recreate small stops with shelves and benches, along the path between both stories.

Aranzadi will change, maintaining what is essential to its character. It will keep the garden that has given it its shape. At the same time, it will make room for its river, thus far contained, and for the public space and its citizens. The Interpretive Center for Agriculture establishes the bridge between two worlds, taking care of managing the garden, educating its citizens and professionals, preserving the native species, and ensuring the maintenance and development of organic farming techniques, which Aranzadi pioneered in Spain several decades ago. 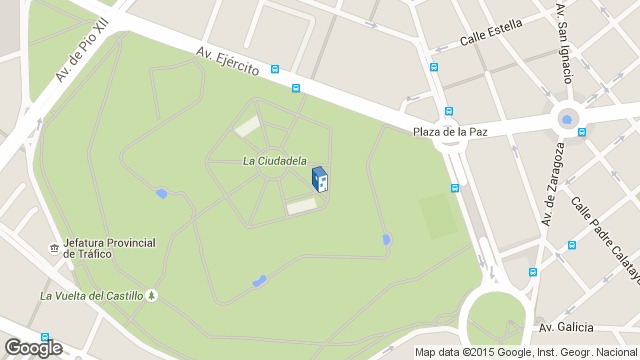 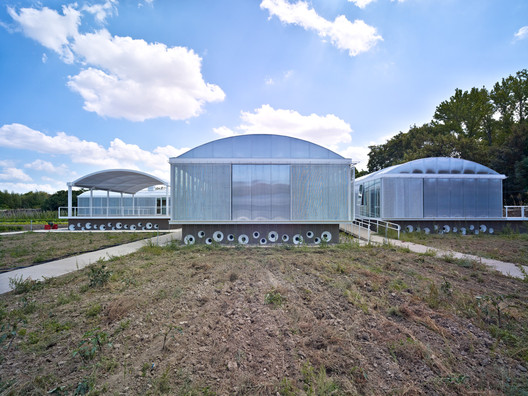