Save
Can We Please Stop Drawing Trees on Top of Skyscrapers?
Share
Or
Copy

Tim De Chant is the senior digital editor at NOVA and editor of NOVA Next. He also writes at Per Square Mile, the blog where this article originally appeared.

Just a couple of years ago, if you wanted to make something look trendier, you put a bird on it. Birds were everywhere. I’m not sure if Twitter was what started all the flutter, but it got so bad that Portlandia performed a skit named, you guessed it, “Put a Bird on It.” (“What a sad little tote bag. I know! I’ll put a bird on it.” Etc.)

It turns out architects have been doing the same thing, just with trees. Want to make a skyscraper look trendy and sustainable? Put a tree on it. Or better yet, dozens. Many high-concept skyscraper proposals are festooned with trees. On the rooftop, on terraces, in nooks and crannies, on absurdly large balconies. Basically anywhere horizontal and high off the ground. Now, I should be saying architects are drawing dozens, because I have yet to see one of these “green” skyscrapers in real life. (There’s one notable exception—BioMilano, which isn’t quite done yet.) If—and it’s a big if—any of these buildings ever get built, odds are they’ll be stripped of their foliage quicker than a developer can say “return on investment.” It’s just not realistic. I get why architects draw them on their buildings. Really, I do. But can we please stop?

Find out why it's not a good idea to put trees on skyscrapers, after the break...

There are plenty of scientific reasons why skyscrapers don’t—and probably won’t—have trees, at least not to the heights which many architects propose. Life sucks up there. For you, for me, for trees, and just about everything else except peregrine falcons. It’s hot, cold, windy, the rain lashes at you, and the snow and sleet pelt you at high velocity. Life for city trees is hard enough on the ground. I can’t imagine what it’s like at 500 feet, where nearly every climate variable is more extreme than at street level.

Wind is perhaps the most formidable force trees face at that elevation. Ever seen trees on the top of a mountain? Their trunks bow away from the prevailing winds. That may be the most visible effect, but it’s not the most challenging. Wind also interrupts the thin layer of air between a leaf and the atmosphere, known as the boundary layer. The boundary layer is tiny by human standards—it operates on a scale small enough that normally slippery gas particles behave like viscous fluids.

For plants, the boundary layer serves to control evapotranspiration, or the loss of gas and water through the tiny pores on a leaf’s underside, known as stomata. In calm conditions, a comfortably thick boundary layer can exist on a perfectly smooth leaf. But plants that live in hot or windy places often have adaptations to deal with the harsh conditions, including tiny hairs on their leaves that expand each leaf’s surface area and thus its boundary layer. Still, plants in these environments aren’t usually tall and graceful. In other words, not the tall trees we see in architectural drawings.

Next let’s add extreme heat and cold to the mix. Extreme cold, well, we all know what that does. It can kill a plant by turning the water inside its cells into lethal, crystalline knives. At the other end, hot conditions post a different set of challenges. To cool off, plants can “sweat” by opening their stomata to release water vapor, at least as long as there’s water available. But even then, plants reach a limit. At certain temperatures, which vary from plant to plant, the photosynthetic machinery inside a leaf starts to break down. Keep in mind these are temperatures on the surface of a leaf, not ambient air temperature. The surface of a leaf—especially in direct sunlight, as on the unshaded side of a skyscraper—can be many degrees hotter than the air, up to 14 degrees C in some species (nearly 26 degrees F).

Then there are the logistical concerns. How are these trees going to be watered and fertilized? Pruned? How will they be replaced? How often will they need to be replaced? As someone who grows bonsai, I can tell you that stressed plants require constant attention—daily monitoring, in fact, and sometimes even more frequently. It’s not easy. Growing simple green roofs is a chore, and those plants are chosen for their hardiness and low maintenance. Trees are generally not as well-adapted to the wide range of conditions likely to be experienced on the side of a skyscraper.

All of this may sound a bit ridiculous coming from someone like me, an advocate for more trees in urban spaces. It probably comes from having seen one too many sketches of a verdant vertical oasis but too few of them actually built. Plus, having studied plant physiology, I know that it’s a pipe dream in many ways. Trees just weren’t made for such conditions. Now if someone wants to gin up a tree that can survive on top of a skyscraper, go ahead, I guess. But I can think of far better things we should be putting our time and effort into, like preserving places that already have trees growing on them or planting more on streets that need them.

Tim De Chant is the senior digital editor at NOVA and editor of NOVA Next. He also writes at Per Square Mile, the blog where this article originally appeared. 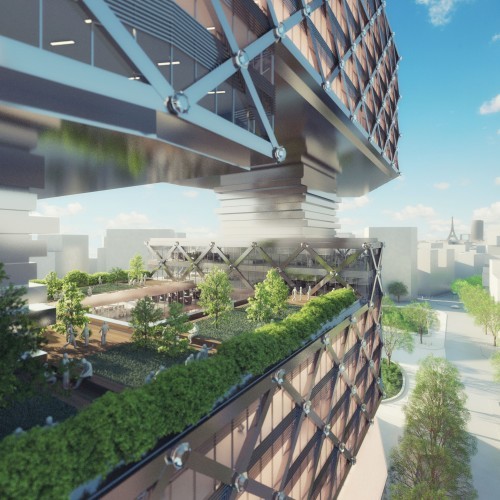