Save
The Drift House Proposal / The Open Workshop
Share
Or
Copy

With shelters and settlements in northern Canada currently undergoing a housing crisis due to decadent construction and energy costs, the corresponding ramifications on overcrowding and deprivation have resulted. What the Drift House aims to do is hybridize the intelligence of tradition and technology of both housing systems to offer direction on future constructions in the Arctic. Designed by Neeraj Bhatia of The Open Workshop, this housing prototype for northern climates proposes a series of snow fences that passively utilize snowdrift to form a new dwelling type by calibrating the snow fences with differential mesh openings and height. More images and architect's description after the break.

With insufficient core populations to support public structures, the typology of dwelling has attained the highest level of refinement within the Arctic’s unique climate. Pre-WWII indigenous Inuit Housing Types had embedded connections to the local landscape, its orientation, materials and fabrication, while embracing the nomadic Inuit lifestyle. With zero ecological footprint, these temporal dwellings employed opportunities from the landscape and atmosphere to form a complex shelter that negotiated thermal performance, local materials, soft construction techniques, program and cultural values.

Permanent architecture –in the form of prefabricated Government housing– was employed in an effort to assert Arctic Sovereignty during the Cold War era by the Canadian Government. Despite instilling new notions of comfort and durability, this new housing neglected the cultural and sustainable intelligence of traditional dwellings. Importing a ‘southern’ model of dwelling, these hermetic containers were highly contingent on imported materials, energy consumption, labor, and transport costs, while forcing a transformation to the Inuit lifestyle that severed a connection to the dynamic landscape. These typologies have formed the template for Arctic shelter and settlements in Canada that still persists today.

While the snow fence is a static infrastructure to protect roadways, it is manipulated to produce a precise pattern of passive snow accumulation from the dynamics of snowdrift. By understanding a malleable system, such as snowdrift, architecture can be formed in response to the landscape — calibrating, mitigating and using once ‘problematic’ environments in an opportunistic manner.

The house is comprised of four nested surfaces formed of ETFE panels that create a series of climatic zones that are parasitic to the calibrated snowdrifts. The accumulated snow passively ‘builds’ part of the dwelling, while also serving as a counterweight to the light cantilevered structure. The nested thermal environments produce a series of thermal zones related to the interior program and traditional lifestyles.

This hybridized space — a series of planes positioned in relation to a dynamic system, meshes high-tech thermal materials with the landscape (snow) to create soft thermal gradients. By using snow as a material, structural counterweight, and enclosure, the Drift House is able to passively accumulate a responsive shelter through the manipulation of a generic technology (the snow fence) to form new a typology of dwelling and construction. 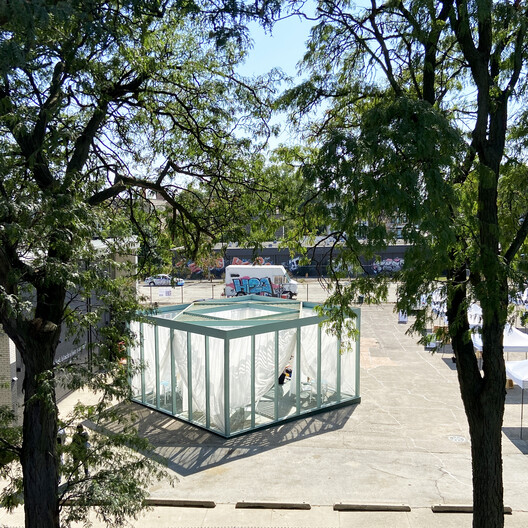