Save
Redevelopment Of The Rail Corridor In Sants / Sergi Godia, Ana Molino Architect

Text description provided by the architects. Throughout the last century, the railway and metro tracks in the district of Sants (Barcelona) have represented a genuine open wound in the urban landscape of that neighbourhood. With eight tracks (six for the trains and two for the metro) and an average width of 30m, the rail corridor has divided the neighbourhood along east-west lines, leaving the resulting areas cut off from each other for 700m, from Calle Sants to Riera Blanca.

The problems this has caused include the interruption of north-south connections within the neighbourhood; the proximity of lines to adjacent residential buildings on the northern side (on Calle Antoni Capmany); the noise pollution resulting from the continuous passing of trains; and environmental degradation immediately around the tracks.

The arrival of high speed rail (AVE) in Barcelona allowed redevelopment of this infrastructure to get underway, a process which was facilitated by the decision to lay the two AVE lines underground, which left two lines free on the surface. This decision also translated into increased public space on the North side, which, together with the availability of important pieces of public land on the Southern side, made it possible to plan for urban redevelopment at a neighbourhood level.

In 2002, Barcelona Municipal Infrastructure (BIMSA), a Barcelona City Council agency, assigned responsibility for the Sants rail corridor urban redevelopment project, and for the oversight of associated works, to the Barcelona Regional Agency. This started a complex process that has involved three administrative public bodies: ADIF (the Ministry of Development), GISA (the government of Catalonia) and BIMSA, as well as neighbourhood associations in Sants.

The option of moving the rail corridor underground was discarded at an early stage due to technical and financial reasons, and an alternative approach was raised: it was proposed that the majority of the tracks should be encased within a lightweight, transparent covering. The roof of this cover would double as a pedestrianised walkway, which would be 1,200m in length and planted with gardens, and would lead from Plaza de Sants to Calle de Salvadors in Hospitalet (with 700m of the walkway in Barcelona and 500m in Hospitalet). This proposal was the start of the Cornisa Verde, a multi-municipality project developed by the Hospitalet District Council which will connect four parks in Hospitalet with the Can Mercader park in Cornellà. The total length of the green corridor will be around 5km and it will function as a primary axis for communication between the two districts. The Sagrera operation in the far north of the city (3.5km in length) is the second of the two sections of green corridor which will allow the natural environment to penetrate the city of Barcelona.

The project promises to radically improve communications in the Sants neighbourhood, since it includes a new road link running north-south along Calle Riera de Tena, passing beneath the railway, and the continuation of Calle Antoni Capmany, running east-west, over the Badal slab. It also creates new north-south connections for pedestrians which will pass both above and below the railway covering.

From the start, we believed that the railway covering should be transparent, which would have allowed the train to be seen as it passed through the city. However, this option was discarded due to the high cost, and it was agreed that only three sections of the line should be transparent, namely, those sections where neighbourhood links ran beneath the tracks. The decision not to glaze the entire structure, however, led to a further proposal, which suggested the construction of three green slopes rising from the lowest point around the tracks to the roof of the cover. These slopes will anchor the structure to its surroundings, which means that the vegetation on the covering can spread downwards to the streets beside the tracks. They will also carry ramps which will allow pedestrian access to the green walkway on top of the cover.

The design of the supporting structure for the cover is based on criteria for absolute functionality in construction, which answers the crucial requirement for timely execution of the works, since it must be built while allowing for the continued maximum possible circulation of trains. The support, which consists of prefabricated concrete slabs laid in diagonal sequence, fulfills this requirement and takes the form of a Warren truss. It echoes the structure of traditional railway bridges by creating large triangles, which are also able to be glazed. The striking character of this exposed structure with its glazed apertures will comprise the façade of the development.

The works completed so far include the covering and glazing of 700m of tracks between Plaza de Sants and Riera Blanca (near Hospitalet) and the completion of the new Mercat Nou metro station. The urban landscaping and the planting of gardens on the roof are to be carried out in the near future. 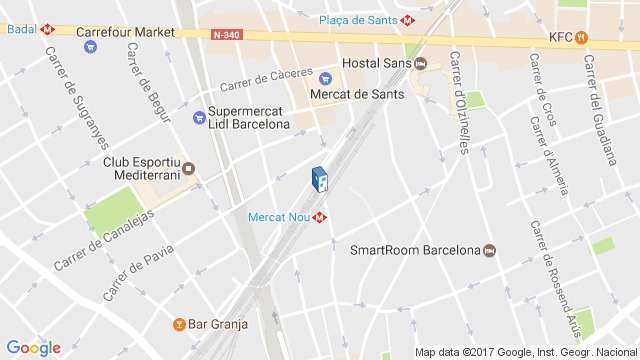