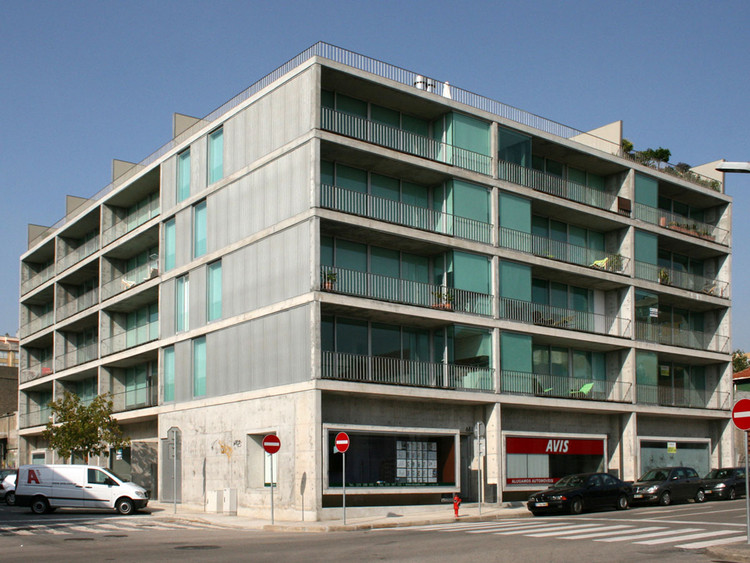 Text description provided by the architects. The entire surroundings were, for decades, an industrial area dedicated to sardine and tuna canning. In these old and sometimes derelict sardine factories, lies a significant part of the Matosinhos collective memories.

From a solid and representative industrial unit rises the outer limit of the building itself. The material used in its construction, concrete and zinc corrugated sheets on facades, will throw us directly to the memory of its predecessor. For years the work of Eduardo Chillida has been amazing me for its simplicity. Showing sceneries by simple abstraction of solids. From an undivided and opaque bloc he works solids out that allow possible visual architectural views. A subtlety of action will define the same creation and definition of typologies, by subtracting matter to the original bloc. By clipping out and moving backwards the glass panes for the windows thus making visible the sub division of the apartments themselves, rhythm and individuality is created. Rooms, lounges, kitchens are visible.

In growing, the building requires human indicator factors. Presence. The slabs mark horizontal divisions for the floor levels. All windows return light back to the inside of the original block. From the outside, we become aware of some typologies for the apartments. Some don’t require privacy, some blatantly do, and again a rhythm of elements is imposed on the façade to hide dwellers.

From the original study of the building, a separation of the slabs stands out, marking a certain horizontal feel to an otherwise tall building.

The contact with the ground floor commercial spaces is thought again. A closer connection to the passers-by is intended. After some initial concern from the clients of the building in selling or renting out conventional commercial spaces in the area, a new attitude is taken, where real stages are created for the pieces to sell. Display windows that act as shelves for items, turning them into immediate actors of a show that happens, as well, on the inside. What you see is less important than what is hidden. Curiosity springs.

Creating the suspended concrete boxes that present goods on stores, has proven helpful in marking entrance spaces, several, on a rhythm that defines also, vertical access to the apartments. Contrary to usual, this rhythm is found through an odd number and the dimension of the said openings.

The common entrance and distribution areas are, themselves, a reflection of the choices for the rest of the materials in the building. Also, a light rhythm is created from a formula seen on the ground floor façade. These are embedded in the walls. The floor is covered, not with conventional ceramics, as often happens in the area, but rather, with a self leveling pavement that eco’s memories of a long lost industrial past of this city.

Typology wise, and because the market demanded so, three types of apartments were developed, with the exception of the last floor where these develop into duplex, double floor spaces.

Some social conditionings spring at this point. The need for a more contemporary use of conventional spaces, such as the kitchen, the lounges and dining rooms, all come together into a sense of equality. Some gain roles and others are pushed to more discreet areas. The laundries, for instance, are set back to the proximity of the rooms, which, eases the transport of dealt clothes. On the south façade of the building, the internal organization of stairwells and entrances pushes the kitchens to the façade, making them as lead role as a Lounge, or a Dining Room.

From a study case in adaptable interiors, all the typologies of the apartments were developed. Sliding doors, panels and walls, adapt the inside of apartments to better meet the need of the owners. For commercial purposes, some apartments don’t present this feature, having the future owners intervened in a sense of achieve vast open spaces, with little closed spaces.

From a very basic and truly commercial need to create a building to retail and sell as individual apartments, a pioneer project was developed for Matosinhos, in the sense of its Commercial Planning. Aesthetical needs can, after all, subdue commercial impulses. Despite all restrictions and containments in creating architecture, as Tschumi mentions, here present in a state of real estate speculation, we can all hope for such projects that return us the joys of urban living. 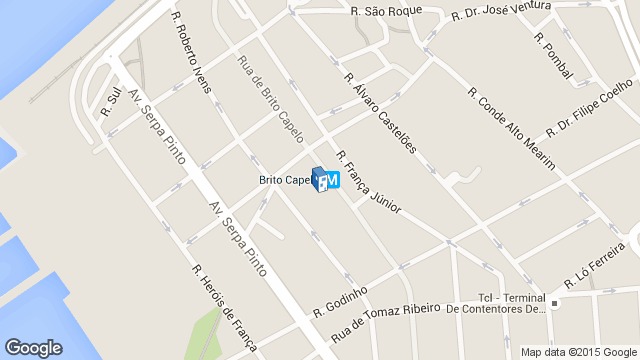 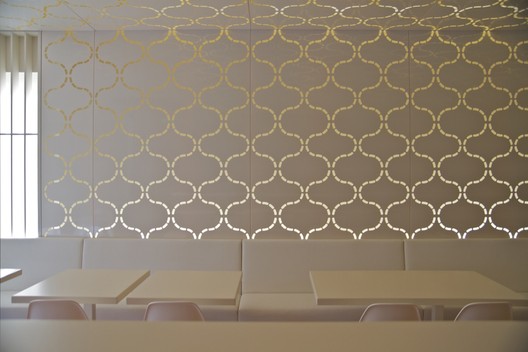