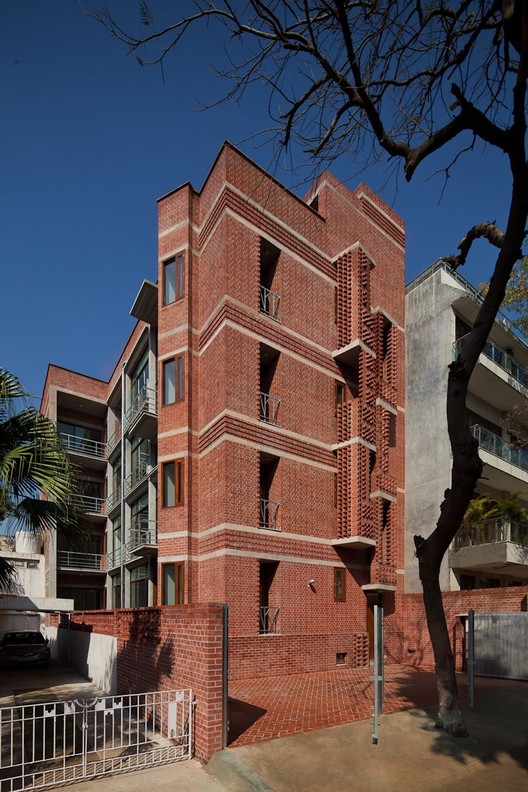 Text description provided by the architects. The Vasant Vihar residence has been designed as a multi-family residence, comprising of two duplex apartments of 4,100 sq. ft. each (Basement / Ground and Second / Third floors) and a single floor apartment of 2,050 sq. ft. on the first floor. Located in a rapidly densifying neighbourhood, this project incorporates a hybrid structural system - load bearing brick masonry walls (achieving an appropriate response to the Zone 4 seismic code) wrap the envelope on three sides, while a reinforced concrete frame system anchors the core. The project juxtaposes an open core concrete frame "tent", within a perimeter mass of brick "caves". Hence, the thicker brick walls with controlled apertures enclose the more private bedroom and bathrooms, while the porous frame, infilled with insulated glazing, enables the south-facing living and dining areas to be illuminated by natural light all day. The house projects an unadorned expression of its primary structural materials. Most importantly, the skin is maintenance free and permanent.

vir.mueller architects worked with the brick masons on site to create subtle shifts and offsets in the facade walls, enabling a textured surface to emerge from the brick structure itself. The deep window recesses in the elevation are highlighted by staggering the bricks in the adjacent walls; conversely, the bathroom windows are veiled in a brick screen, exaggerating the sculptural potential of the material on the facade. As the brick wraps from the east facing front facade to the south facing side, the load bearing walls transition to reveal the glass clad concrete frame. The entire south facade faces a stepped garden, descending from the ground floor to the basement. The edge beams of the concrete are detailed to create drip edges, with a thin edge that frames a "necklace" of stainless steel - this is actually a rainwater collection pipe, storing the water collected from the terrace in an underground cistern.

The limestone floors in the interior are highly polished to reflect light, contrasting against the exposed brick walls. The pleated concrete stairs, floating in the double height volume of the public rooms, have railings that are crafted in stainless steel pipe. The electrical and air-conditioning services are routed in vertical shafts located on the exterior walls, facilitating ease of maintenance.

As children are being raised to develop sensory skills in synchronicity with tablets, the vital link between the sheer physicality of human interface with material in domestic space is perhaps most critical. In the chaos of a dense and cacophonous urban metropolis, the volumes of this building - filled with light and patterned with texture and shadow - seek to create a sense of wonder even within the everyday confines of domestic space.

In creating a house with locally available materials, and crafted by regular construction workers, vir.mueller architects are asserting the primacy of regular construction means and methods as the basis of a contemporary design practice. This residence establishes the primacy of habitation in harmony with the environment, and an architecture capable of identity without bombast.

The creation of India's urban success must reflect in all neighbourhoods, on each block, and on every street; the primary constituent of the street is the individual building. Until each building demonstrates design sensitivity and construction excellence, the architectural potential of our cities shall remain unfulfilled. 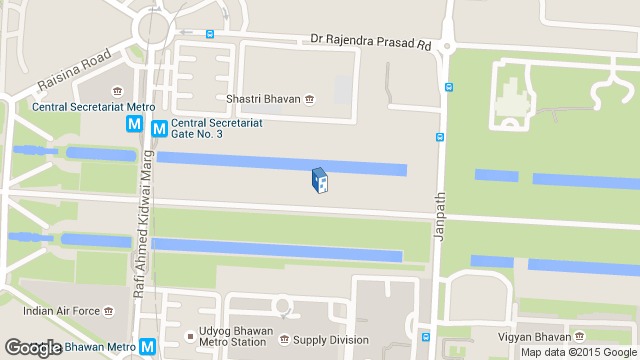 Location to be used only as a reference. It could indicate city/country but not exact address.
Share
Or
Copy
About this office
Vir.Mueller Architects
Office
•••