A multidisciplinary, international team led by Alkistis Thomidou, Chryssa Komantou & George Anagnostakis of Also Known As Architects, and Gianmaria Socci won a special mention for the "Rethink Athens: towards a new city center" competition with a proposal based upon a new practice of citizenship, one that would physically reshape public space and let people regain control over their city. The proposal provides an intense linear space that will awaken hibernating potential for activities to shape the surrounding territory that will be unburdened of the existing restrictions to constitute a field enriched with traces of the city’s memories. More images and architects' description after the break.

The city is the spatial manifestation of the relationship between people and power and results as the stratification of consecutive political visions. Democracy has nowadays lost its connection with the urban daily life and it is mostly sustained without people’s involvement; consequently, public space is perceived as the manifestation of decision-makers and people find it hard to claim their right to it. The recent riots in Greece show how citizenship is now expressed through frustration and friction, as a reaction to top-down decisions, without being constructive. Historically public space was more important than private space; in the Agora, Stoa was the place for discussion and exchange, surrounded by daily activities that constituted the core of the society.

The direct democracy of ancient Greece could be the reference for a contemporary urban model which includes members of all age and social groups, in which stoa as its spatial consequence inspires a new approach to public space. Usually, big urban gestures express a top-down set of mind and tend to neglect the existing layering of the urban realm. The latter resembles a palimpsest that includes successive materializations of the social economical and political conditions that prevailed from ancient Greece to the modern era. However the current economic and social situation asks for flexible and cost-effective solutions that rely on people’s contribution. The crisis should be dealt with as an opportunity to introduce an additive approach that would lead to a greater benefit out of the minimum intervention.

Technology carries along great potential for re-establishing the bond of citizens with the city; by grafting the infrastructure, which is an effective, costly and permanent intervention, the city will be provided with a framework for spontaneous appropriation. Along with the tramline an infrastructural spine is created for small-scale elements to be plugged-in and serve people’s contemporary daily needs as expressed and modified in terms of locality and weather conditions. The mild Mediterranean climate expressed in a virtual nine-month summer instilled an innate gregariousness thereby affecting the character of their activities and the way they are spatially manifested. Kitchens, tables, lounge chairs, workstations, bathrooms, ponds, projectors, power sockets and Wi-Fi, water fountains, herb gardens, bike repairing stations, gyms create a habitable environment.

A phased construction approach allows the proposal’s basic tenets to adapt to any concurrent social, economic and political changes without interrupting the fluidity of experiencing the urban reality. The expected appropriation will trigger people’s creativity, stimulate small-scale productions and revive arts and crafts for an alternative lifestyle. It will create the premises for a new practice of democracy, one interwoven with everyday life.

The proposal along Panepistimiou street is paired by punctual intervention in the three main plazas that face the street itself. Portions of a greater agenda, the plazas claim their own autonomy and materialize as freestanding objects that liberate the unexpressed potential of the existing spaces:

- Korai square, due to it’s position among two major city nodes (Trilogy Complex and Klafthmonos Sqr.) is bound to play a pivotal role. By introducing a linking element in the form of a light metal passageway housing a bike parking, Korai emerges as a piece of connective tissue between two main urban organs enabling them to act in unison. The increasing use of the bicycle as a transportation means reinforces the hub like character of this walkway.

- Dikaiosynis square, A space formerly perceived as bland and dispersed where nobody would enter, is being walled to trigger people’s curiosity. Once inside, the wall contains facilities for small art and craft workshops, that provide an outlet for creative ventures. A new kind of active appropriation of urban space is thus enabled, with a multitude of craftmanship items created, reinserting the small scale manufacture in the inhabitants experience.

- Omonoia square,The flux of people, on the square’s ground level was until now limited to the perimeter, whereas the real hustle and bustle was taking place in the underground center of the station. To bring this activity to light, a crater is formed by lifting the square roof- lid off the ground, thus imbuing Omonoia Square with a long lost centripetal dynamic. Part of this dynamic is the transition from the Panepistimiou “forest” area to a clearing where the outlook of the cascading ponds merges with the reflecting pool in the center of the square’s plateau to create a unifying horizon. The simple and explicit design gesture strengthens its function and character as an urban plaza. 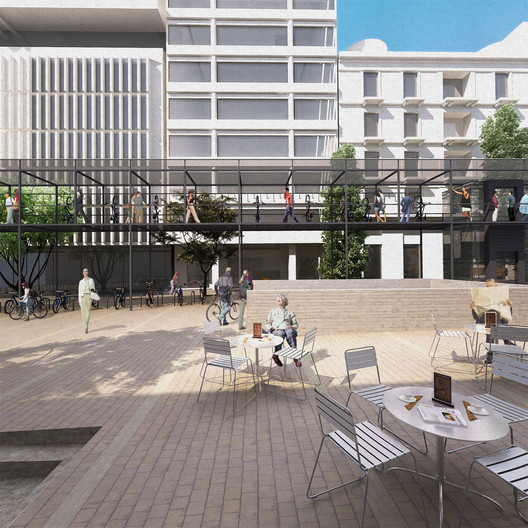 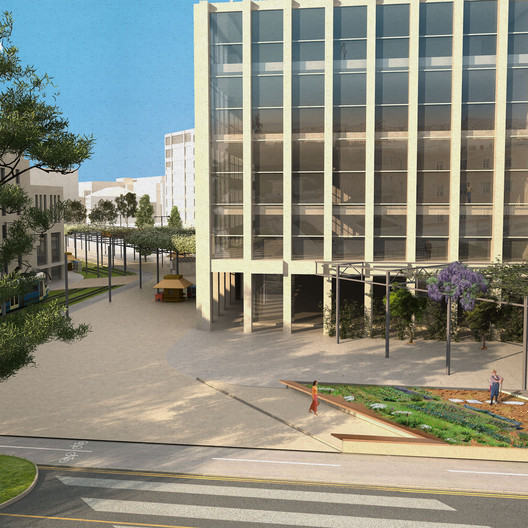 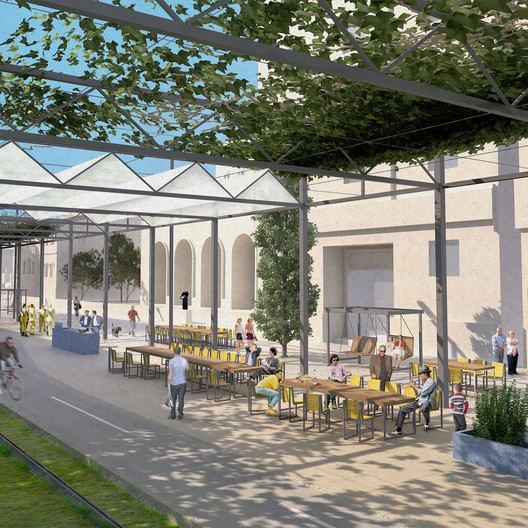