Designed by Dimitris Thomopoulos and his team, their proposal for the Museum for Underwater Antiquities and Regeneration of part of the Piraeus Port Authority, which received an honorable mention, intends to create an experiential space that stimulates the visitors’ senses through their exploration in the museum’s interior. The museum itself corresponds to its special function in a more contemporary way, while highlighting the existing building’s shell and its original use. More images and architects’ description after the break.

The design of the museum was based on the interpretation of the museological preliminary study and its adaptation by locating the permanent exhibition space within the silo complex. Towards this direction, the complimentary functions are organized into an underground section so as the main volume of the building remains attached.

The six sections of the exhibition concern two separate topics: the first five refer to  underwater antiquities, while the sixth one is related to the silo building and its original use. This distinction is increased by developing the sixth topic throughout the rest exhibition, rather than remaining strictly separated.

The design concept is that the visitors’ circulation in the museum follows proportional the function’s route of the original use of the building. The main exhibition spaces are located mostly in the typical part of the silo building, within the area of the cells. The way the cells were handled refers to the character of the exposed antiquities, the time capsule and the closed sets of marine excavations. The closed shells are sculpted in such way that create succession subgroups reminding underwater caves where individual exhibition sections are organized.

The former port area and Kekropos highway consists a strong barrier between the city and the sea. Concept design of the regeneration of the coastal zone of OLP, is the creation of a new “Pier Culture” and its connection with the city through the activation of the nearby open spaces and archaeological sites. The region where the new cultural activities are sited forms an area of supra local character, a promenade for residents and visitors, and beyond to it a more localized, creative space for relaxation and recreation, a park for Piraeus. 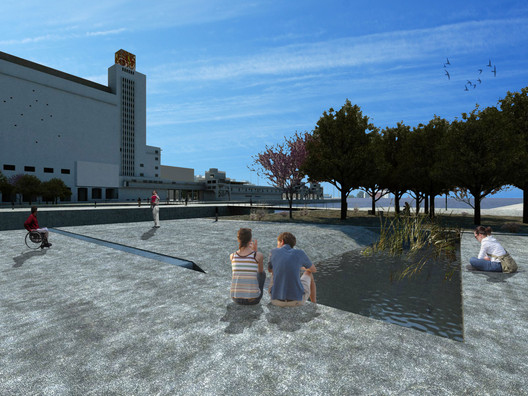