Text description provided by the architects. Designed for the 2013 Melbourne Food and Wine Festival, the Urban Coffee Farm and Brew Bar by HASSELL attempts to play on this element of intrigue and surprise, creating an unexpected landscape in a familiar urban setting. The architects’ design brings a jungle of coffee trees on the edge of a central business district which opened just last week and runs until March 17. More images and architects’ description after the break.

Approximately 120 coffee trees will transform the 'Red Stairs', a popular public amphitheatre on the banks of Melbourne's River Yarra, into a terraced coffee farm and abstract, modulated jungle. Alongside the trees, a collection of shipping containers, timber pallets and packing crates will demonstrate the journey that coffee beans take from where they are grown to the lips of a big city coffee connoisseur.

The inspiration for the Urban Coffee Farm and Brew Bar comes from a desire to evoke the still somewhat mysterious and exotic geographies associated with the source of coffee. It brings to life the story about coffee, inspiring coffee drinkers to think about its origins, production and transport.

It’s possible to stumble across a coffee plantation within the clearing of a jungle. In fact, the most flavorsome coffee is grown within twenty degrees of the equator in the shade of mountains and under the protection of the existing vegetation canopy. The Farm also plays with the idea of the takeaway nature of contemporary urban coffee culture, and the temporary nature of the Melbourne Food and Wine Festival itself.

Its physical expression is not polished, but rather appears to be quickly and haphazardly gathered together. The visitor is invited to ‘takeaway’ knowledge, new experiences and of course, a cup of coffee brewed by some of the city’s best baristas.

A total of 125 coffee trees from a disused coffee plantation in New South Wales were used on the Farm and they have been sold to someone who will replant them in Victoria. Over 2,000 tropical plants were used to create the jungle effect; these will be given back to the nursery that donated them for the duration of the Festival. About 1,500 pallets were also donated for the Festival, these will also be returned to the owner and used again once the Festival is over. The shipping containers which are the undercover areas on the Farm were at the end of their life so this is their final destination. 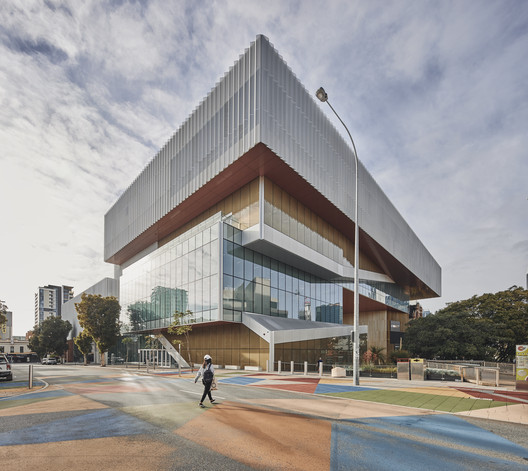