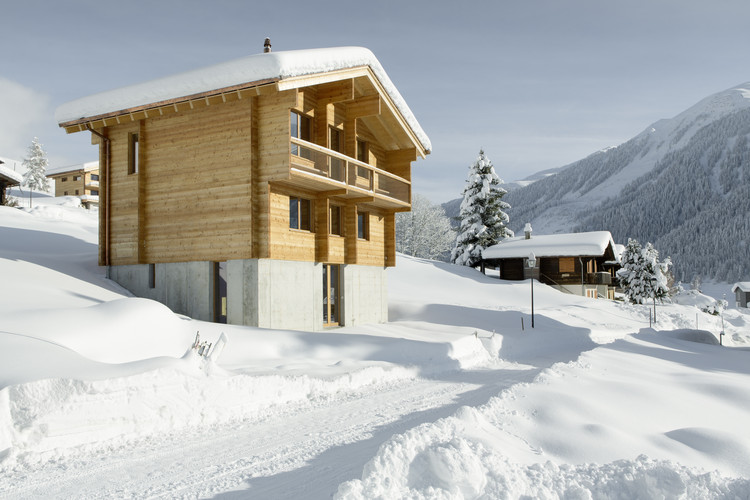 Initial Situation
The Goms is a mountainous region located in the Valais canton. Besides the impressive landscape features a centuries-old tradition of wood construction which still exists in extensive parts of the area. Unfortunately, this building style didn’t evolve in a positive manner during the last couple of decades. Many of the newly built structures do not blend in with the character of the villages. Furthermore, no attempts are made to evolve a new style of housing based on the existing traditions. The goal should not be to solely conserve the existing context, but to develop an overall strategy rooted in the qualities and characteristics of the existing context.

Wooden Structures
The history and culture of the villages in the Goms valley have always been closely related to the development of wooden structures. Unfortunately, the profound knowledge about the particular construction technique tends to sink into oblivion instead of being applied during the construction of new buildings. Therefore it is important to pass this valuable knowledge on to our descendants while making it more attractive again. This applies for the log construction method in particular. Due to the fact that it is deeply rooted in the region, it can be considered highly ecological and sustainable.

Project Site
The project site is located at the loosely populated northern edge of the village. A generic historical cluster of houses constructed in the log building method is located only a stone’s throw away. The building adapts the constructive logic of this significant historic construction style while reinterpreting it according to the clients needs. The sloping terrain mainly remains unchanged and is hence covered by the typical local meadows. Only a narrow pass way serves as connection between main entrance and adjacent road. To protect the wooden structure from moisture, it is placed on top of a concrete base which at the same time envelops the ground floor. The interior walls of this floor however are part of the wooden structure. They can be understood as an extension of the wooden upper floors reaching into the concrete shell consisting of the enclosing walls of the grond floor and the slab underneath. Like this, the wood can unopposedly spread its natural warmth within the entire volume of the building.

Material
The character of the log building method is determining the structure and materiality of the project. The log structure itself is made of larch wood, which is more noble and resistant than spruce wood and is also used for the windows and most built-ins. The log walls, which penetrate the inside of the building are visible at all times. By contrast, the internally insulated outer walls are clad with gypsum boards and covered with grey slaked lime plaster. This generates a contrasting interplay between mineral and organic surfaces. The shadow gap along the upper edge of each plastered surface clearly reveals its non-structural character.

Spacial Concept
Due to the system of chambers which is known to be typical for log buildings, the ground floor is symmetrically divided into a circulation zone and four equally sized rooms. Those contain bath and sauna, technical installations and two studios. This room layout widens upwardly according to the respective function of the rooms to climax right under the pitching roof as over heigh piano nobile. From here, one can gain access to the spacious balcony occupying the entire width of the building. Two outside benches invites to linger while being well sheltered from the wind.

Sustainability
Thanks to the extraction of thermal heat from the ground, no fossil energy is used for heat production. The renewable construction material wood reduces the amount of grey energy and thus decisively minimizes the ecological footprint of the building. In addition to that, returning to the log building method preserves, revives and promotes a traditional local craftsmanship. 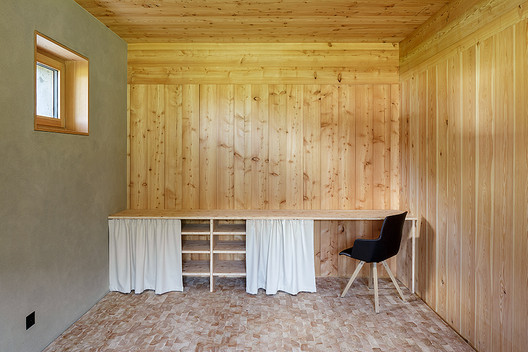 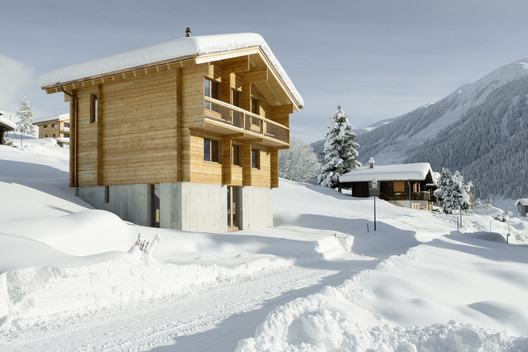