Designed in 1984 for artist Lynn Norton and writer William Norton, Frank Gehry’s Norton House is known for its eccentric form and eclectic materiality. Much like his own house in Santa Monica, the Norton House is a sculptural assemblage of everyday materials. The Nortons had in fact seen Gehry’s house in 1983 and obviously approved of his experiment. So, a year later, they commissioned him to design their house on a narrow, ocean-facing plot of land on Venice Boardwalk. With the commission, Gehry continued his exploration of creating architecture with everyday materials, low costs, and sculptural forms. 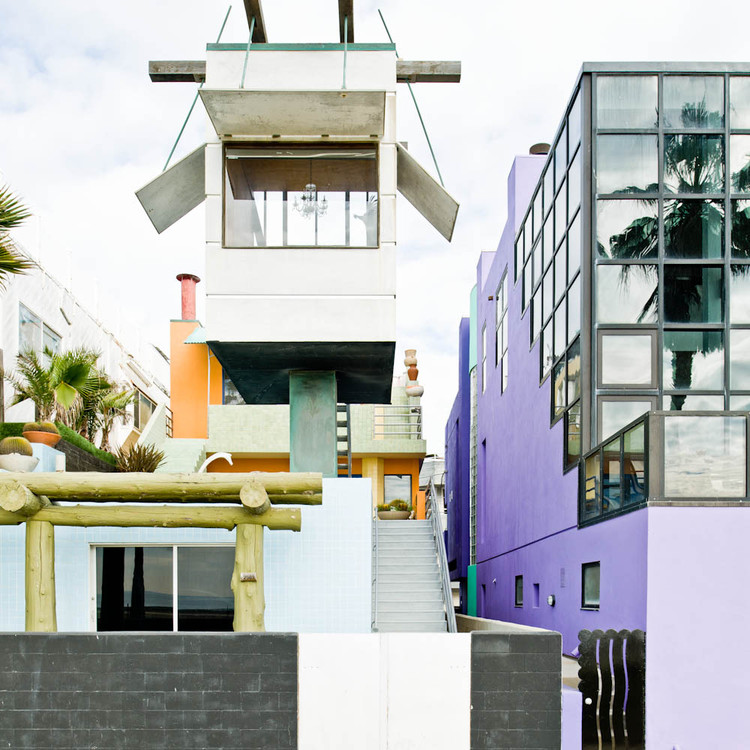 Formally, the building is a group of offset boxes connected by interior and exterior staircases, each with a deck area above.  The ground floor, which houses two bedrooms, a studio, and a garage, is subtly set back from the street wall. The volume itself is wrapped in bright blue tiles. The second floor, which contains the main living spaces including a kitchen and living space, is set farther back in an effort to maintain privacy. This space opens onto a terrace overlooking the ocean. The third floor, which includes another bedroom and an external staircase to the roof terrace, has its own deck as well.

The most notable form of the building, however, is the studio: a purple box perched on a pillar towards the front of the main terrace, accessible only by an exterior stairway. The studio faces the ocean and fashions a large panoramic window at its front. Wooden shutters and timber pieces that rest geometrically on top of it contribute to its resemblance of a lifeguard station, a reference applicable to both the location, as it is on a beach where lifeguard perches are commonplace, and the client, as William Norton was a lifeguard in his youth. Although the perch has the best view of the ocean, the majority of windows in the house face it. This also makes for better privacy.

The house achieves its coherence through fragmentation. There is no singular detail that runs throughout. Instead, it is odd and contrasting details that unite to create a whole: “Walls rendered with stucco are painted in different colors to accentuate geometric shapes, whereas other sections are faced with contrasting tiling. A tall, red chimney, visible through the glazing, rises through the house to pierce a glass canopy at roof level. A simple structure composed of wooden logs suggests an informal entrance" (Johnson & Lewis 11). As with his own house, these disparate features merge into a eccentric coherence.

Gehry designed and built the Norton House on a very small budget. Having previously experimented with cheaper and more standard materials, he was able to utilize their ‘everyday-ness’, and with them, create something unique. Using things like chain-link fence, standard kitchen tiles, industrial staircases, he created an important piece of architecture with very little money.