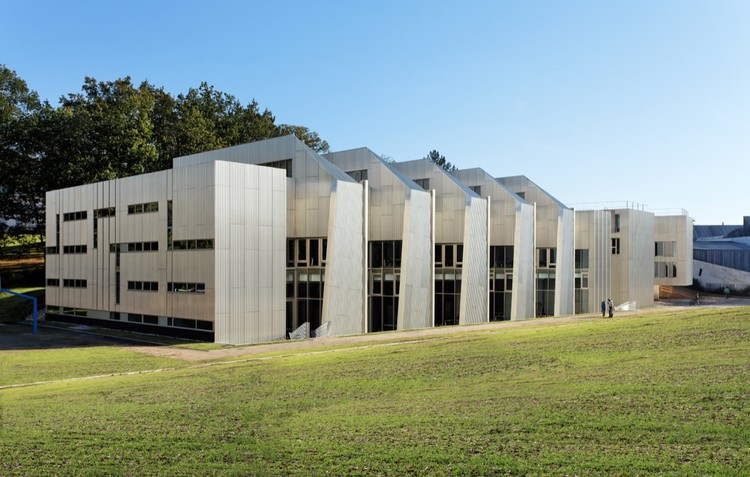 The three separate volumes express the three parts of the program: the entry hall, the reading rooms and internal spaces. The shape is an expression of our perception of the program and our response to the requirements of a low energy building, fully acknowledging lighting and thermal comfort as well as highlighting the site’s contrasts.

The indoor layout of the University Library has been designed to be as clear as possible: the entry hall at an intermediate level dispersing, by means of a monumental staircase, to the two large reading rooms. Special attention has been put into making the reception area easily accessible and giving them a convivial atmosphere. The play on height changes throughout the structure can be perceived from the entry hall, allowing one to enjoy simultaneous views of different floor levels and displaying the flexible organisation of the library.

Clinging to the existing paths and slope, the building, like a ribbed-shell covering rough concrete, organises and structures the spaces and views. The inner skin amplifies the idea of ​​an organic architecture, using the sheds to suspend the upper floor beam. The large trusses within the sheds suspend the upper reading room thus liberating the floor plan from any columns. The inside and outside thus communicate freely and the facades are a result of this relationship: they create an "indoor show" for visitors.

The east facade is completely open to the woodland and is naturally protected from the sun by a curtain of trees. Smooth and straight, it allows those who walk outside to discover alongside them the two reading floors as well as allowing people on the inside to benefit from the view of trees and plants that is offered to them.

In contrast, the west facade is structured by a series of closely-knit cells that become the  form of the sheds on the roof, drawing in the light with a northern exposure, thus avoiding direct sunlight. The transparency of the façades and the openness of the floor plans allow slanted and distant views.

The north facade is pierced following the disposition of the study rooms.Lastly, the entrance on the south facade or Trombe Wall (named after the physicist who invented the principle) is formed by a darkly stained concrete wall in front of which is placed a glass screen. The air circulating in the gap between the two layers is heated by the sun to help heat the building. Overheating risks are reduced by the shadow brought by the brise-soleil during the summer. 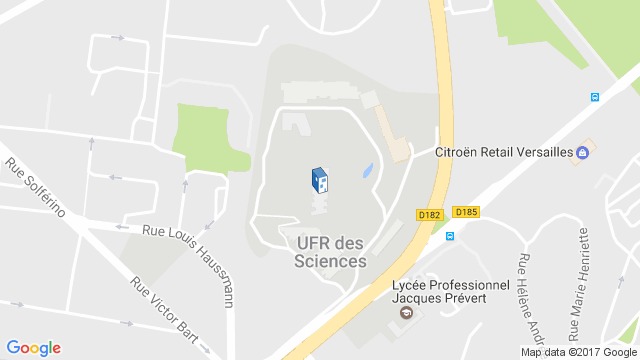 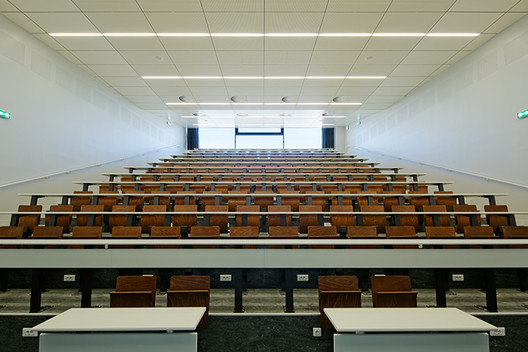