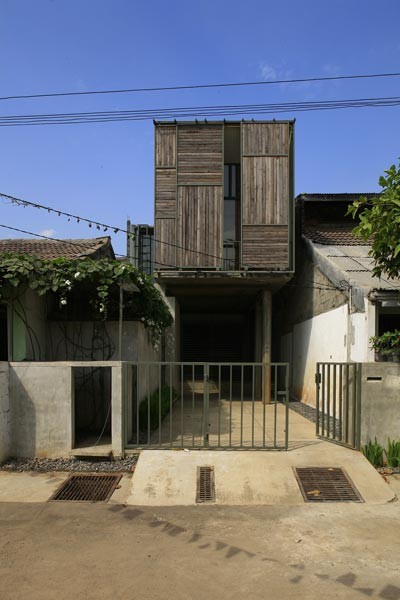 Text description provided by the architects. This project was offered to the architect after the client had seen his project for the low budget Sugiharto Steel House. The client had previously lived on the site in a tiny, 36 square meters real estate house, on a 78 square meters piece of land in a high density housing area in the suburbs of Jakarta. Piece by piece, he bought the lands behind his house, acquiring a total of 250 square meters, but sloping up to the rear boundary of the land. After buying the land, he only had a limited budget to renovate the house, which presented the challenge for the design.

The concept was to build a floating box that shelters an open space on the ground floor, a modern reinterpretation of the traditional rumah panggung (platform house). The ground floor became the living and dining room, and the box on the second floor contains the bedrooms, a sitting room and a study. The entire ground floor only had one gate in front that functions as the main entrance, and can also entirely open to connect the house to the communal garden and badminton court in front of the house.

With the limited budget in mind, the basic structure of the ground floor consisted of concrete columns, beams and slab, because at the time of the construction, concrete structure was cheaper than steel structure. But to create a lightweight structure, the second floor was formed from lightweight steel framing covered by a metal deck roof. A screen made of reclaimed wood covered the front façade of the box to shield it from the hot Western sun.

On the right side of the house, a 60 centimeters gap was created to allow sunlight in and rain to fall into the gutter that flowed to the front of the site. This gap prevented problems with leaks that could have occurred if the house had touched the neighboring house. The open air concept of the ground floor is also intended for the occupants not to be dependent on air conditioning. 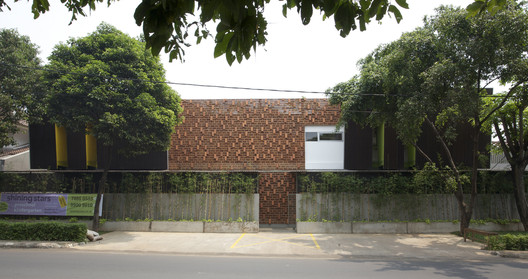