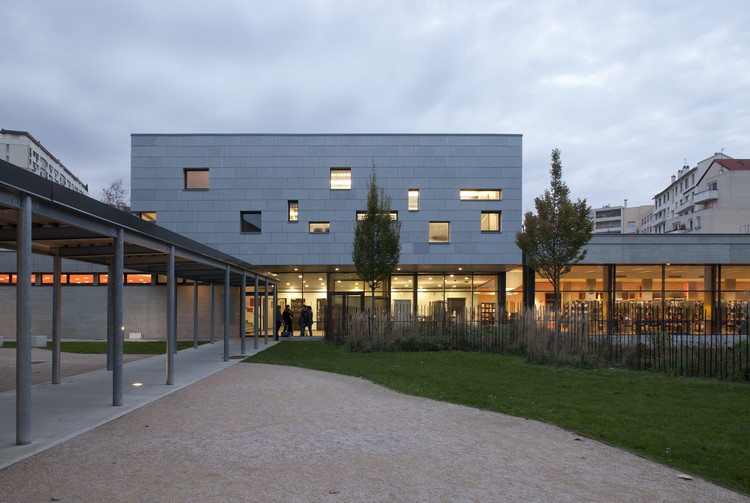 The IUFM (Institut Universitaire de Formation des Maîtres – Primary School Teacher Training Institute) is located in the former Ecole Normale pour Garçons, a building dating from 1885 in a large property called Clos Fayet in the Croix-Rousse district of Lyon. This building has all the architectural features of the typical late 19th century to mid-20th century French school. It has been inopportunely encroached upon by recent constructions.

To extend the building, the architects have now devised a scheme to complete the general overall composition, by enclosing the rear of the property within a clear-cut partition, that is, by adding the final length of wall to completely enclose the building. The new stone and concrete building is the contemporary materialisation of this new limit, with unostentatious style and great force. It dialogues with the existing constructions in a subtle, silent relationship, creating a place that lends itself to learning, reflection and meditation.

In a studied interplay of daylight, views and transparency, it reveals itself little by little as one moves around the building in an almost monastic atmosphere.

This large plot is in a low-density urban fringe between an old city district and an area of modern urban development. With a monumental entrance on Boulevard de la Croix-Rousse, it is built in the middle of a varied range of 19th century buildings, large properties, small industrial sites and mainly 1970s housing.

To extend the building and face this diversity, the architects deliberately chose to establish no relationship with the neighbourhood and, instead, to open generously onto the garden, thereby benefiting from all the southerly aspects.

It is a very horizontal building with a quite low volume that develops lengthwise. It takes its inspiration from themes based on the concept of the wall: hedges, enclosure, surrounding wall, boundary wall, fence, cloister, etc. A play of strata formed by strips of concrete further accentuates the scheme’s horizontality and lets in large shafts of daylight. The spaces are arranged in a sequence from west to east: the sports room, the lecture theatre and the media library.

The use of daylight is central to the scheme design. It is different in every part of the building, and it is adapted to every use.

The media library occupies the largest part of the project. Its large curtain wall facade runs along the garden beside the pond, and extends under the lecture theatre as far as the sports room. From outside, it offers transparency and visibility; from inside, a reading room in the middle of greenery.

Readers can sit directly against the glazed walls. Large, wide wooden surrounds frame the views, encourage concentration, enclose work areas and create a scale adapted to that of people.

The central bay is double-heighted. Its clearly-visible post and beam concrete structure lets in large shafts of filtered light from the side via the strip windows on the south, and from overhead via a glazed part of the roof that extends vertically as far as the patio.

The north strip is occupied by the project’s technical and administrative “back office” and by work rooms for groups on the ground floor and on the upper floor. The transparent quality is maintained from one façade to another by numerous openings that preserve the views and the light.

The media library is generously lit from various sources, creating the warmth and balance appropriate for reading and for concentrating.

The lecture theatre is the symbol of knowledge. It is highlighted by its raised, tilted oblong volume under which one looks for the entrance, which is accessible from the original building via a canopy. It creates an easily identifiable and rather unusual facade on Rue Bony. It seems as if it is placed on a horizontal plinth.

It is a block of stone, a higher quality material than the concrete mainly used in the scheme. The stone facing of the walls is also visible on the soffit in the entrance and inside the media library.

The fenestration has a virtually musical composition and rhythm. The windows bring light right into the heart of the building, which is mainly a totally opaque box. It is also lit by fixed glazed panels that provide discreet views of the library.

The roof is in zinc, supported by a glued-laminated timber structure.

A play of materials

The sports room recalls the existing gymnasium in the design of its west facade, composed of thin concrete louvers. They balance high-quality natural daylighting with solar protection and views, preserving the privacy required for users. On the south, strip windows and tall windows moderate the light from the setting sun.

The scheme makes very fine use of materials. It consists mainly of light grey tinted concrete with a wood textured moulded finish. It plays with a subtle difference of texture, brilliance and colour between the grey Cenia stone of the lecture theatre and the dark green ventilated Eternit cladding on the north facade.

The floor and ground surface treatments add to these effects of differences and similarities while maintaining continuity between exteriors and interiors. Footpaths in brushed concrete run alongside the building as well as gravel walks and pebble gardens. Grass grows between the concrete reinforcement bars, forming a boundary between the public entrance to the media library and the IUFM school’s garden.

Inside, the materials, furniture and colours have been chosen carefully: there is a range of soft tones in the teaching rooms and the lecture theatre, a large red carpet in the reading room and an oak floor in the media library, with bright red sports flooring in the sports room. The opposition between finished and unfinished materials highlights the concrete loadbearing structure, while there is a false ceiling made up of acoustic baffles in the reading room, in the form of a central square incorporating indirect lighting in the sports room.

As a contrast to these hard materials, greenery plays an important role. There is a succession of varied greenery and softscaped features that connect to the existing courtyards. In front, the decorative pond and its aquatic plants designed by Atelier Anne Gardoni help to create a harmonious atmosphere that lends itself to meditation. The whole picture harmonises with the existing cedars and the very graphic mulberry bush. Behind, a little pebble garden of Japanese inspiration is visible from the back of the library and from the street.

The planted roofs covered with sedum [stonecrap] offer a pleasant fifth facade, accentuate the strata effects and are visible from some places inside the building.

With this extension to the IUFM school, the Atelier de la Passerelle firm has designed and completed a simple building that has great feeling and serenity. One discovers it little by little, and it does not reveal itself completely right away. It is the result of the subtle alchemy of the attentive treatment of forms, materials and light. 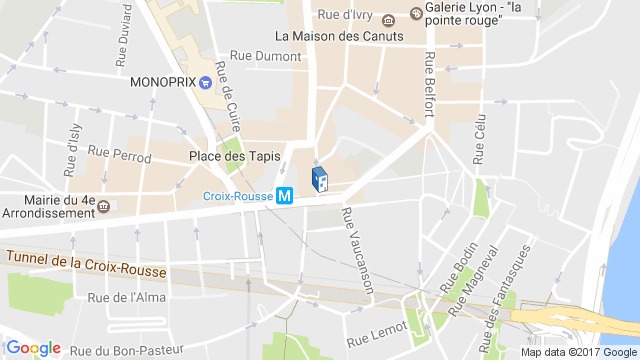 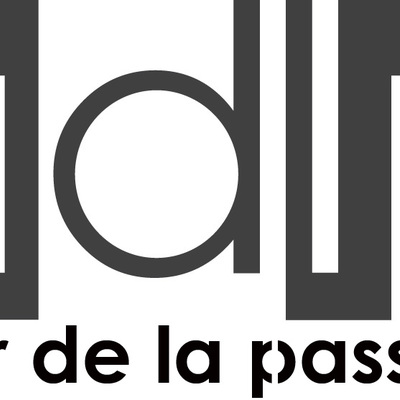