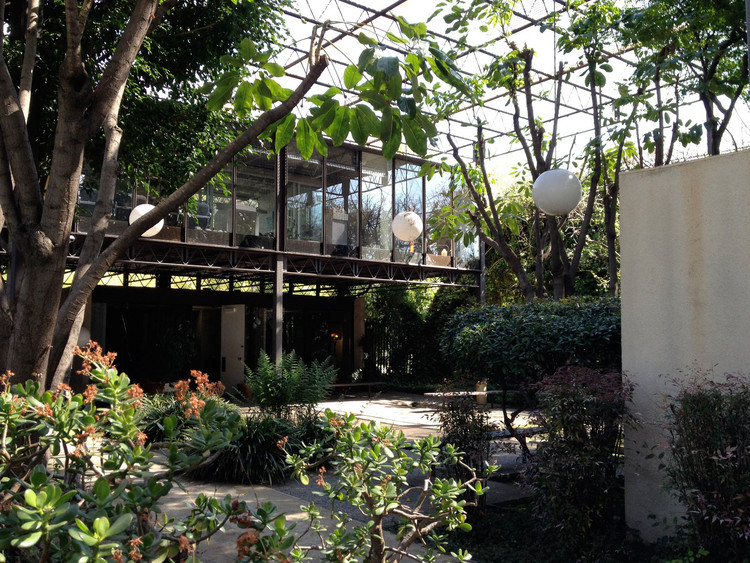 Follow us after the break for the eleven exhibitions that will be part of PST's event.

Windshield Perspective (A+D Architecture and Design Museum: April 18th - June 23rd) brings the unconscious experience of driving through one of LA's busiest roadways, Beverly Boulevard, into a sight.  Through choreographed photographs that freeze the nuanced experience of driving along the dense and disorderly corridor, the exhibit reveals the details that fall out of sight for those drivers and passengers that have an impersonal experience with the context.   The exhibit designed as a lens that magnifies and clarifies the everyday city landscape and brings its unnoticed elements to light.

Outside In (Art, Design, & Architecture Museum, UC Santa Barbara: April 13th - June 16th) looks at one of LA's architecture firms that expresses the attitude of postwar California.  The exhibition reveals Whitney Smith and Wayne Williams' approach to architecture as it relates to the environment in their residential, commercial and public buildings, as well as parks and master plans.

A. Quincy Jones (Hammer Museum: May 25th - September 8th) will be the first exhibition to closely examine the LA-based architect's work, paying close attention to the collaborative nature of his projects.  For forty years, Jones worked at refining postwar housing for the middle class using cost-effective, innovative, and sustainable building methods.  His forward thinking led him to design homes with shared green spaces, varied home models and non-grid based site planning.

In Focus: Ed Ruscha (J. Paul Getty Museum April 9th - September 29th) will explore the artist's engagement with vernacular architecture and the urban landscape.  The exhibition will show his paintings, prints, drawings and photographs to express his attitude towards the city and its development.  The motifs of Ruscha's work reveal an interest in the lively essence of everyday architecture and urban elements: gas stations, apartment buildings, logos, and signage.

Technology & Environment (Kellogg University Art Gallery, Cal Poly Pomona: April 11th - June 12th) will examine the postwar housing and its gradual change of design as influenced by necessity as well as construction materials and methods. It will cover the Case Study House program that included Richard Neutra, Raphael Soriano, Craig Ellwood, and Pierre Koenig; the modern architectural tradition of Rudolph Schindler, John Lautner and Ray Kappe; and the post-modern architecture of Charles Moore and Frank Gehry. The exhibition will explore how technology and tradition influence the way that the language and style of architecture developed in LA.

The Presence of the Past (LACMA: June 9th - September 15th) will focus on the proposed future of LACMA's campus with master plans by Rem Koolhaas and Peter Zumthor's reconsideration of the east campus.  In three parts, the exhibition will explore the considerations of the designs, the history of the proposals and the influences on the design from the architects' past projects and influences.

Stephen Prina: As He Remembered It (LACMA April 7th - August 4th) explores the influence between LA's modernist architecture and its contemporary art.  Prina's work will explore the themes of site-specificity, personal history and the unreliability of memory.

Everything Loose Will Land (MAK Center: May 9th - August 4th) will look at LA's artistic relationships in the 1970s when artists' and architects' ideas converged and collaborated to yeild developments in both fields that challenged conventional and traditional values.  The exhibition posits that the "looseness" of LA provided the perfect medium for the developments that emerged through this process.

A New Sculpturalism (MOCA: June 2nd - September 2nd) will look at the radical forms that have seeped into LA's architecture over the last 25 years.  The exhibition begins its focus in 1980s when the new wave of "post"-post-modernism was taking form.  It will also focus on the pracitioners of the 1990s and their avant-garge approaches in the theoretical and technical realm.

A Confederacy of Heretics (SCI-Arc: March 29th - July 7th) focuses on the brief period of time when influencial LA architect, Thom Mayne held a temporary gallery in his home.  It will include models, drawings and media  that had been presented in the original 1979 exhibitions.

Check PST's website for more information on events that will be running concurrently with the exhibitions.