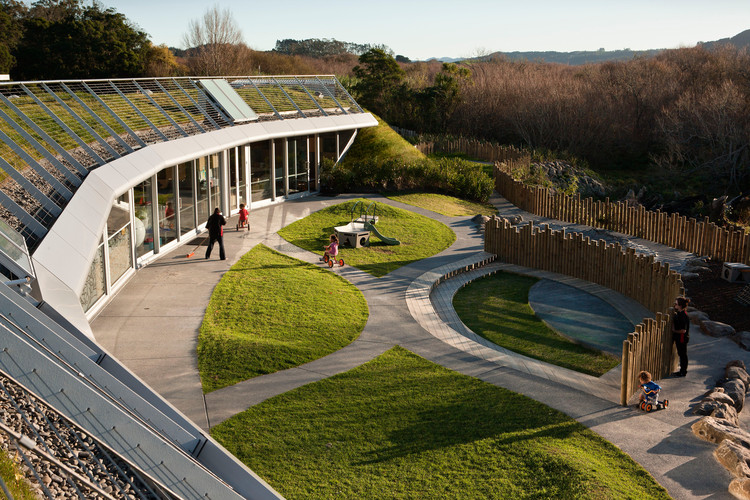 Text description provided by the architects. This design is an early childhood building for a Maori tribe (Ngāti Hine) in Kawakawa, New Zealand. The brief called for a building which would not only accommodate the clients tamariki (children) but teach them about their culture and customs on a daily basis whilst having a minimal impact on the environment.

Our concept for the building is based on the Maori tradition that all life is born from the womb of Papatūānuku (earth mother), under the sea: the word for land (whenua) in Maori also means placenta.

Maori architecture is historically rich in symbolism, and so the design is conceived by shaping the land into a womb-like form, with the building forming just like a baby within: the building literally grows out of the land.

The only opening to the building is along the north facade, and reads as a cut in the earth. This cut symbolically represents the caesarian birth through which all of the clients iwi (tribe) take their lineage: their ancestor Hine ā Maru was the first recorded Maori woman to deliver a child by caesarian section and survive the procedure about 600 years ago. It is from this opening that the children symbolically enter the ‘world of light’, where they play.

The building is located on marshy ground, with the ‘womb-like form’ appearing as an island, relating back to the tradition that all land is born from under the sea. A bridge is formed to give access to the island, which is symbolically shaped into the tribal waka (canoe) Ngātokimatawhaorua, representing the journey of the tribes forefathers from Hawaiki to Aotearoa (NZ).

The earth that mounds up over the building makes reference to Ngāti Hine-pukerau (Ngāti Hine of a hundred hills-a local name derived from the landscape). The interior, below the earth, represents the nearby Waiomio caves where the ancestors lay buried and the Ruapekapeka pā (fortification) where the ancestor Kawiti cleverly used underground shelters as defence from attack. The circular form of the design also draws inspiration from traditional pā.

It was equally important to integrate passive environmental design features into the building, so all ‘symbolic’ features have many environmental purposes: all glazing is oriented to the north for maximum solar gain, whilst the super-insulated earth roof results in minimal heat loss, which is further assisted by the unheated circulation space placed to the south. For further internal comfort, exposed concrete construction and natural ventilation allows the building to be passively cooled in summer, with minimal heating back-up in winter provided by a solar hot water underfloor system. All spaces are naturally daylit and will need no additional electrical lighting during the daytime. All blackwater is treated on site and the clean nutrient rich water is used to irrigate the green roof. The building has been submitted for a Green Star rating and is anticipated could achieve 6 stars. 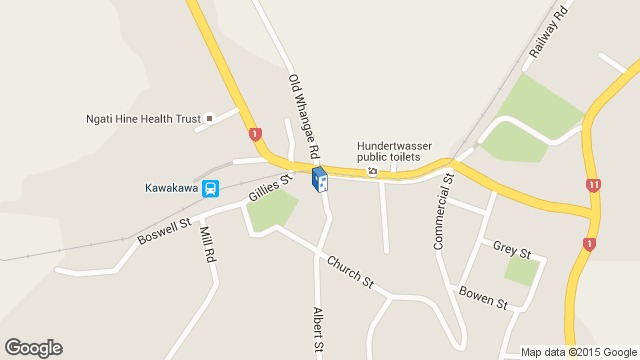